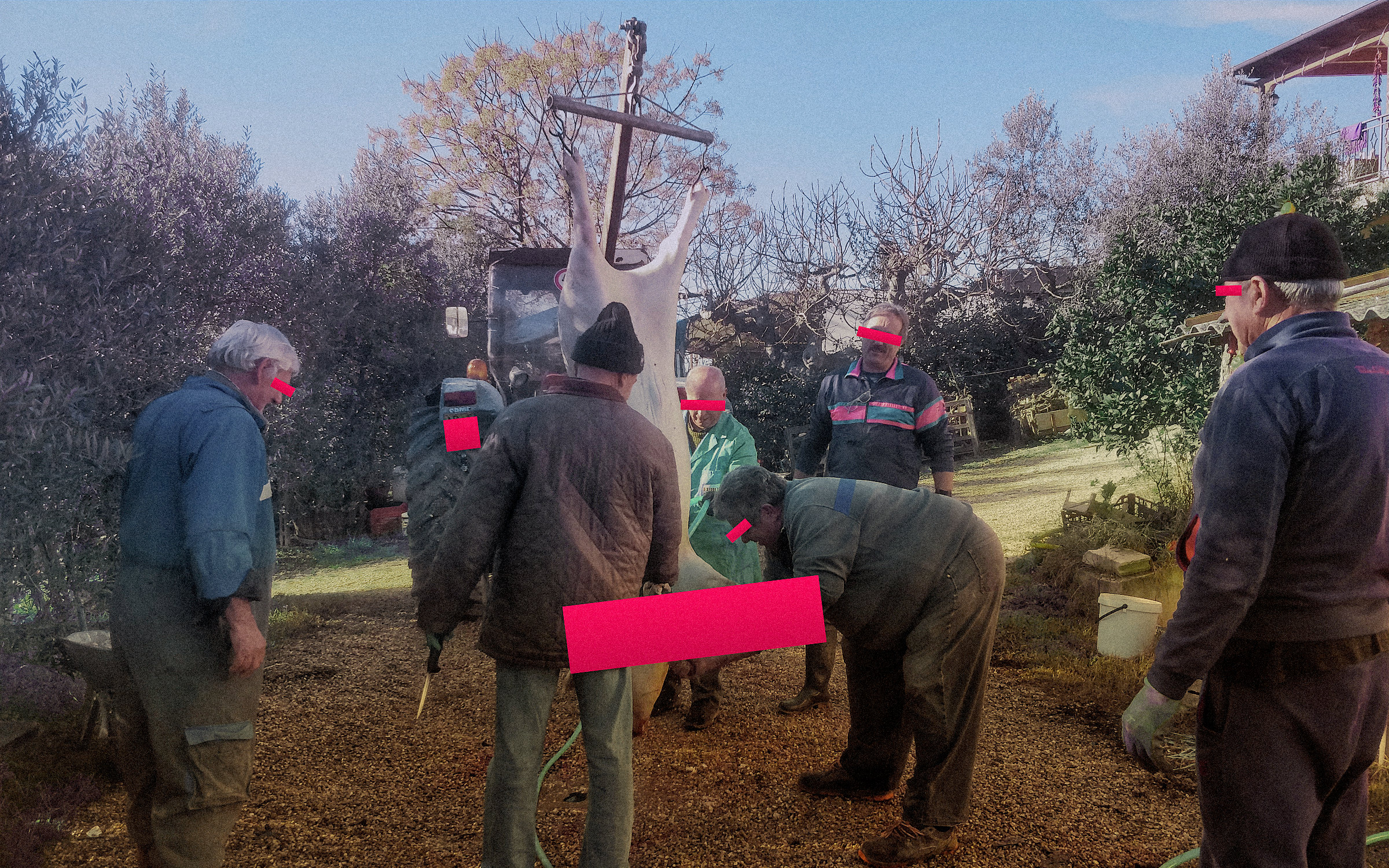 I killed a pig – controversial, I know! It’s a topic that will create controversy, a debate even, but that is rooted deep within us. North to South, Italy is full of bloody traditions, from spezzare (breaking) the pig to hunting for game, the nation of the boot has no problem to be grim when needed. A legacy of times past, when the taste of meat was something not accessible to most people, when a pig could feed you for a whole year.

Who knows when the boundaries between “practice” and “tradition” were lost, but when I write this article, the killing of the pig is a well-established tradition in the Abruzzo region, where entire families gather in the period between Christmas and New Year’s Eve, to give life to this ritual made of wine, breakfasts and splatter. 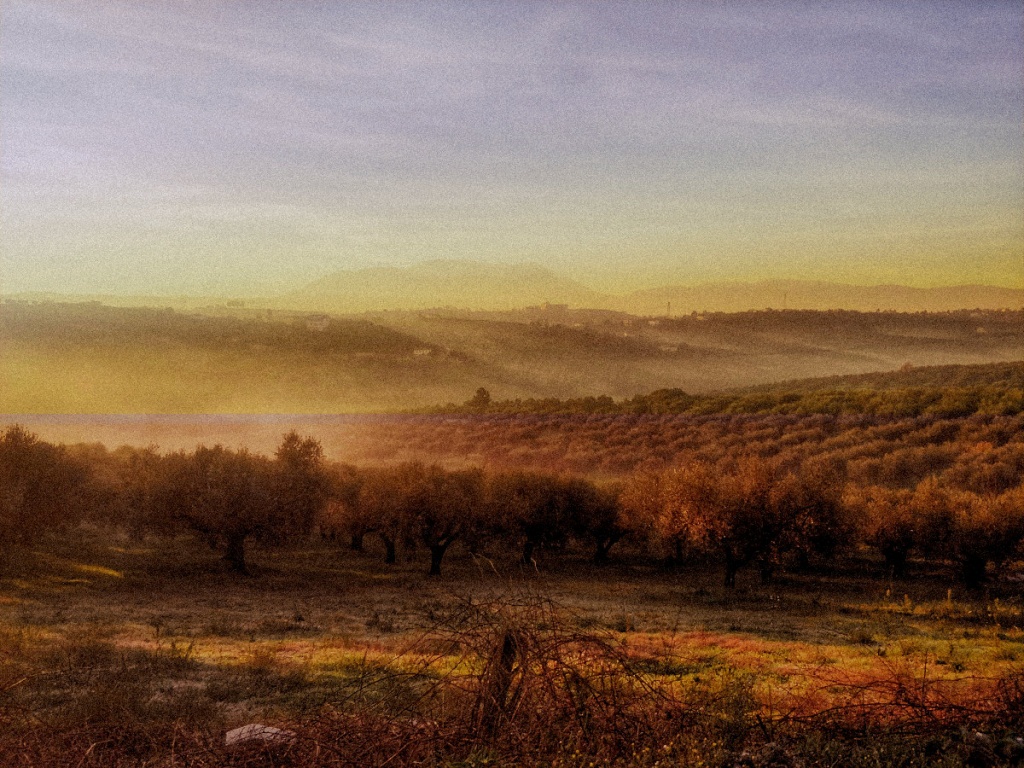 It’s 7:00 am and I head to the hinterland of Pescara, on a waning moon day (the moon seems to be influencing the taste of the meat), ready to get my hands dirty and my liver to swell. The typical village bar group is waiting for me: tracksuits of various 70s athletic associations, you’ve never heard of, old school trucker hats, with the power to make Williamsburg Hipsters salivate, and the eyes of those who woke up early in the morning to “fatijare” (to work themselves out).

“It’s 7:00 am and I head to the hinterland of Pescara, on a waning moon day (the moon seems to be influencing the taste of the meat), ready to get my hands dirty and my liver to swell.”

While I greet everyone, the pig is hung upside down. Mr Nicola is the breeder and he who wields the blade, who cuts the carotid artery with a sharp blow. He has giant hands, so big that if he shook my hand, I couldn’t hold them, but at this moment they seem so light, almost like a samurai with his katana. Death can impress with its simplicity: a deep exhalation and everything ends … that is, if the blow comes from “the maestro”.

After much of the blood has drained to the ground, we pass to washing the pig, a mystical experience. The pig’s body is carefully cleaned, hair is removed and the skin becomes as white as a sheet of paper. Hands and water alternate, in an almost hypnotic perpetual motion. This experience is surreal because without being conscious of the act, the whole event becomes an almost religious rite, a homage to a broken soul. It is worth a thousand times more than all the debates you have done on “El Topo” and “The Holy Mountain”. Once washed, the pig’s interiors are extracted. The little you can’t eat will be fed to the countryside, while everything else will be reused in sausages, stews, etc.

It’s 9:00 am, breakfast time. Sandwiches, seasoned sausages, wine, beer, oil-peppers, ham and everything else the countryside has to offer follows one another. The atmosphere is jovial and relaxed, given that the minimum consumption goal is to drink at least 2 glasses each. From this moment on, my glass will be filled every time I take the last sip of wine.

“It’s 9:00 am, breakfast time. Sandwiches, seasoned sausages, wine, beer, oil-peppers, ham and everything else the countryside has to offer follows one another.”

It’s 11:30 am, I’m tipsy and full of brio. I am transported to another house, where Nando, the Cif e Ciaf artist, is waiting for us. Cif e Ciaf is a traditional Abruzzese dish, a sort of stew that uses some of the best parts of the pig, especially its head, guanciale, other facial muscles, bacon and ribs. Tradition dictates that you must use “hot” (just slaughtered) meat to test the flavor of the pig, to see if there are any problems. Over the years, the people of Abruzzo, as the true party harders that they are, have decided to take advantage of this opportunity to eat and drink until they reach the deepest food coma. 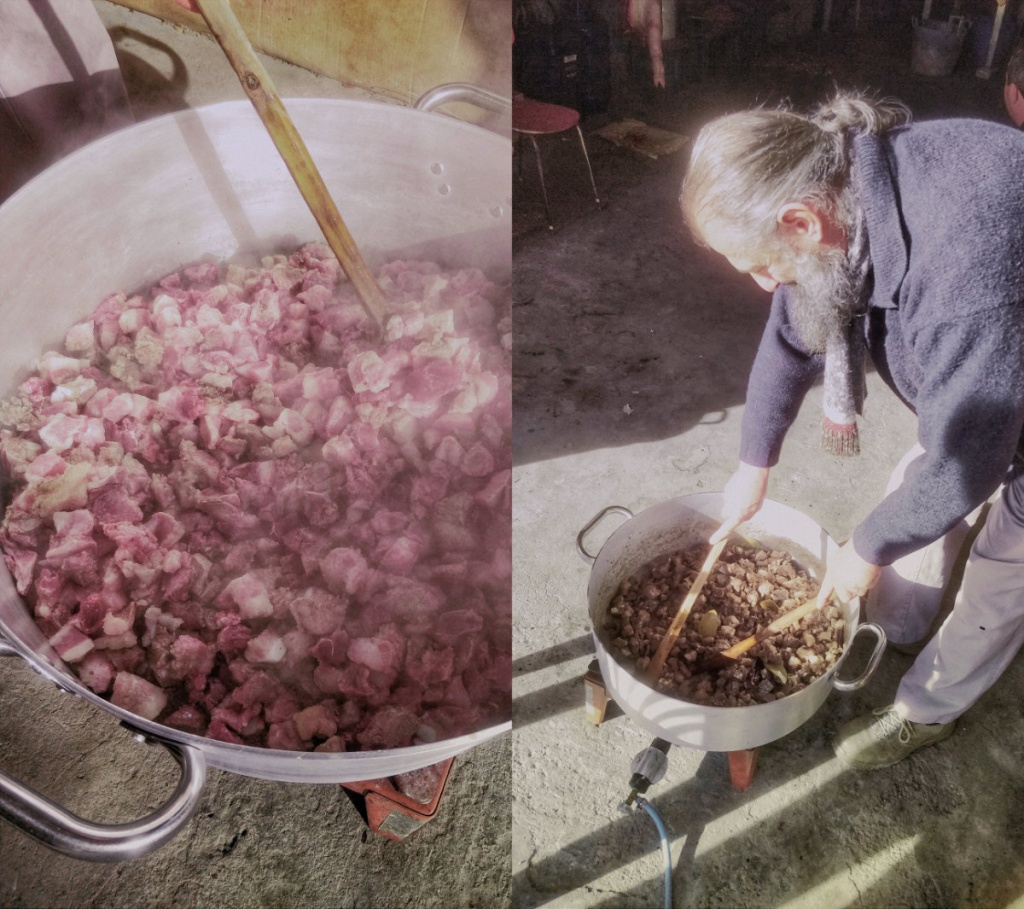 The dish is very simple to prepare, just fry the meat with a little water (a lot of fat will be released from the meat itself), gradually adding various herbs and spices (garlic, bay leaves and sweet pepper), then blend with Montepulciano and add the tomato puree. A dish that can be easily reproduced at home, but that expresses its own potential only on this occasion: the meat without ageing has a totally different taste.

It’s midday and we sit at the table. During the ritual in the morning, we were five, at the table we are 14. I told you that we know how to have fun in Abruzzo, so within moments the word has spread, everyone is welcome at the table, you just have to squeeze a little. The menu is simple: dry pasta with meat sauce and Cif e Ciaf. It feels like a wedding. The portions are exaggerated, bottles of wine flocked between the various out-cries of “Oh you are finishing the bottle! Tomorrow I’ll stop by your house and drink all of yours!” and “Are you drunk? No? Then drink up!” The food comes in waves: “Try the sausages too! And the olives! And the seasoned sirloin!”

“It’s midday and we sit at the table. During the ritual in the morning, we were five, at the table we are 14.”

Finally, I can try my own bowl of Cif e Ciaf. The meat melts in my mouth, while the sauce, full of fat, carries all the taste on my tongue. The flavours are balanced in a perfect way, incredible to think that everything has been measured by eye. 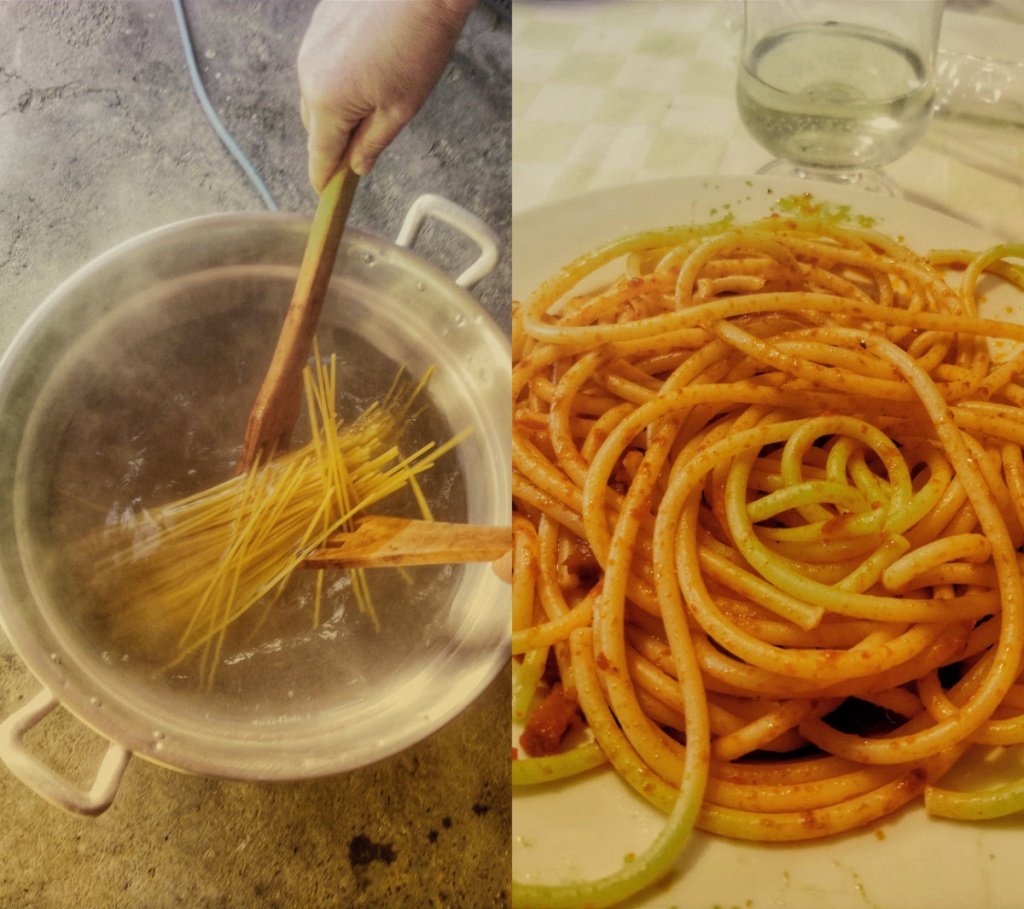 It’s 4:25 pm and I’m still at the table. My head is light due to the copious amounts of alcohol I’ve drunk and my belly requires me to undo the button of my pants. Considering that I’ve been drinking since 9:00 am, I would say it’s time to go.

No matter how many times you experience it, the ritual is a transcendental experience, which can open the mind and change your life. Among the laughter, the wine, the human warmth that only the countryside during times of celebration can give, I understood the value of life, how the sacrifice of an animal must be respected, how it is transformed into nourishment that can unite entire communities. Seeing the care with which the animal was raised, fed and then killed with as little pain as possible, opened my eyes to a meat market that could be much fairer and less violent. 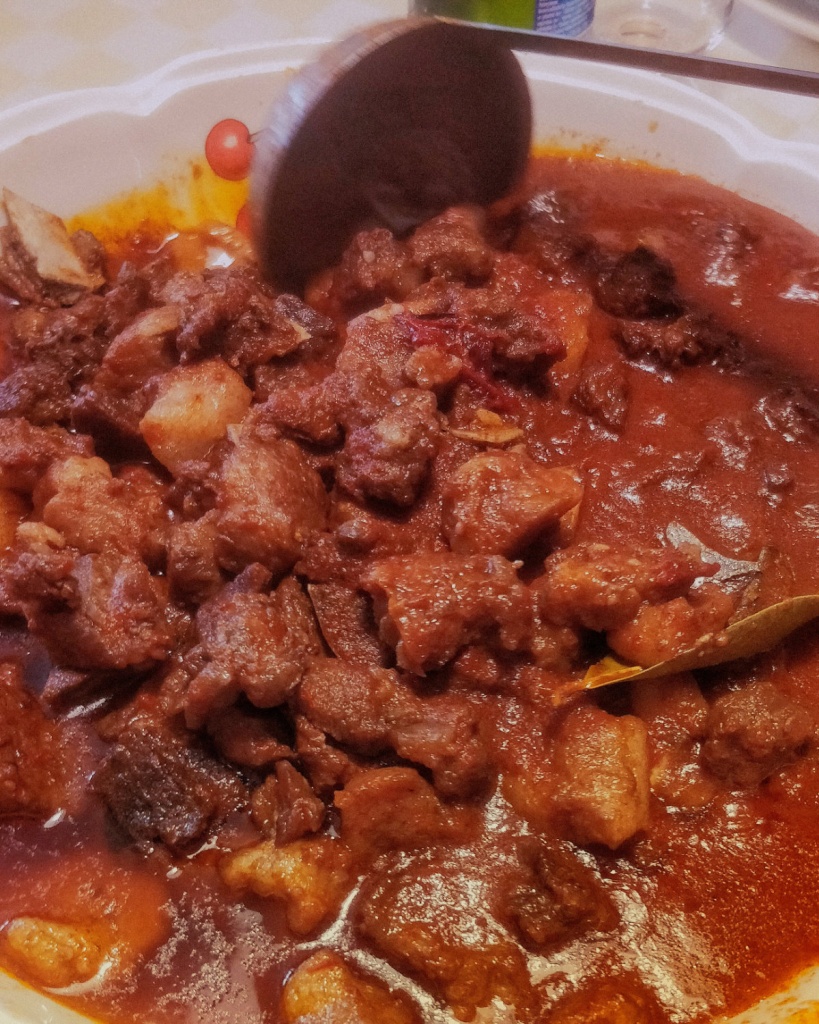 I asked Nando “the Cif e Ciaf artist” to teach me how to make it. Here’s the recipe or the best rendition I can give of it (disclaimer: my memories might have been a little obscured by too much Montepulciano d’Abruzzo…)

A little bit of red wine

A splash of Water

In a stainless steel pot add the pieces of pork with just a splash of water, put it on a moderate flame, stirring from time to time.

When the water is evaporated and the fat starts melting in the pot, add garlic, laurel and sweet dry peppers, stir vigorously.

After a couple of minutes, add red wine and let reduce. When the wine is reduced to a minimum add the tomato sauce (it needs to be at room temperature)

Let it cook for another five to six minutes and add salt to taste.

Finally, as Snoop Dogg would say: Serve it while it’s hot. 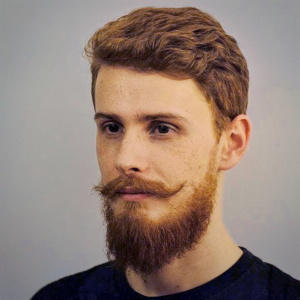 He is an alumnus of the Master’s Program in Food Culture, Communication and Marketing. He worked as an Interior Designer for fashion firms like Lacoste and Fusalp and for private clients around the world. In 2016 he founded “BBQ da Blushu”, a food blog where he talks about barbecue, beers and 90s pop culture, and in 2019 he launched his own youtube food show.