As a kid, I used to unabashedly grab a few slices of baguette from the basket in the middle of the restaurant table. I would start by taking the soft pillow of dough out of the middle; alternating between squeezing it until flat and putting the fluffy pieces in my mouth, gently waiting for them to melt. Usually, I would take two to three pieces of bread before dinner; until I was yelled at for being inconsiderate to everyone else at the table. Pre-anticipating that I would fill up on bread, my mother, the sage and selfless dinner-goer, would usually not order an entree for herself and eat mine when it came.

Now, my relationship with bread has changed. All the diet advice and health magazines advocate for eliminating bread and “gluten products” completely, claiming that they are the source of modern health concerns. Reading those articles and seeing people around me actively avoid bread and gluten products, I can no longer be a mindless consumer of bread. I decided that I would try to learn as much as I could about bread, and eventually try and bake a loaf myself.

First things first, bread is not natural — it’s a product of agriculture and civilization. It all goes back to the Fertile Crescent, the Near and Middle East about 10,000 years ago. In order to cultivate a healthy and growing population, each society had to choose plants that were both productive and nutrient-dense. In the Mediterranean, the grain of choice was wheat. As the population and cities grew bigger, the amount of wheat that was planted and harvested grew with it. Though pre-modern, large-scale production of bread would not be possible without agriculture, the invention of bread was, for lack of better words, kind of an accident. What’s generally accepted as bread’s origin story is that somewhere between 14,000 to 10,000 years ago, people in Ancient Egypt discovered that when a mix of flour (ground up grains) and water, a type of gruel or porridge, is left out for a few days it comes to life. The mixture starts bubbling, indicating a yeast colony-forming and when baked, it “magically” rises.

Recently, I experienced this magic for myself as I embarked on my first sourdough journey. For one week, my morning routine was weighing out flour and water to feed my starter. For that week, my life revolved around my little baby sourdough starter; I would feed her, she’d bubble, rise and fall, showing signs of life. I would wake up early to make sure my baby was bubbling, and clear my social calendar to research the best organic flours to feed her — I even visited a flour mill to better understand the process. Based on my “extensive” fieldwork and research, I settled on a mix of rye and wheat flour (without the bran). These are both the most nutritious and needy flours because they can spoil and acidify (becoming too sour, attracting bad bacteria), but I wanted nothing but the best for my little baby sourdough.

“I would wake up early to make sure my baby was bubbling, and clear my social calendar to research the best organic flours to feed her — I even visited a flour mill to better understand the process.“

Clearly, my experimentation with sourdough became a bit of an obsession, but I just couldn’t help myself. It was the first time I worked with bacteria and not against it, and it felt so right! My collab with bacteria made me realize what I had been missing out on all the years I was eating pre-sliced bread in plastic packaging with 20-30 ingredients.

From Fermentation to Industrialization

So, how did this happen? How did we become a culture of pre-sliced, plastic-wrapped bread consumers? Well, industrialization offered up a convenient solution to the long process required to make sourdough — industrial yeast and refined flour. With refined flour, bread can have a much longer shelf life, not spoiling near as fast as my whole-wheat and rye flour would. Industrial yeast is a concentrated, manufactured product that selects seeds, ferments and processes in a laboratory or processing plant and aids in speeding up the fermentation, or the rising of bread and bread products. There is nothing inherently wrong with either of these products, but it is important to understand that these two products are newer to the process of making bread in a sterile and industrialized fashion.

“Well, industrialization offered up a convenient solution to the long process required to make sourdough — industrial yeast and refined flour.”

Industrialized bread removes the process of a long and slow fermentation of wheat and water with wild yeast, which helps to break down the proteins (gluten) in the endosperm. Less gluten means the bread doesn’t rise as high as some industrial bread — it is denser and has a lower glycemic index. Foods with a lower glycemic index break down slower; not causing an immediate spike and subsequent crash in sugar levels. The sourdough process of long and slow fermentation is also unique in its production of an enzyme from the lactic acid called phytase, which helps to make the essential minerals in the grain, calcium, magnesium, iron and zinc, bioavailable to us. This basically means that phytase is the key that unlocks the secret drawer of vitamins that we need to survive (hence the term essential minerals).

“If I cannot inspire love, I will cause fear”1

Industrial bread producers have tried to outsmart nature by fortifying flour with these essential minerals. Again, just like industrial yeast and refined flour, fortification isn’t inherently bad; however it has become a huge part of the western diet, and with it we’ve seen an increase in health concerns such as: gluten allergies and intolerances, obesity and more recently, a general anxiety surrounding the consumption of gluten products. Maybe this anxiety isn’t completely unwarranted. Industrialized bread and bread products are what most of us consume daily; products that are virtually unable to be recreated in the average kitchen.

If the bread on the shelves isn’t nutritious, what are we supposed to do? We all have busy lives and industry preys upon convenience; so most consumers have accepted industrial bread and bread products into their kitchen. Those who are weight-conscious avoid it, because health magazines and top diets say it’s bad. What the health magazines and fad diets fail to include in their life and diet advice is that eating sourdough bread is affordable and nutritious. Offering “better” gluten-free products and creating anxiety around the consumption of gluten for those without a serious allergy isn’t a sustainable solution. We must consider the system as a whole and evaluate what it’s doing to our health. Gluten isn’t the problem; it’s bigger than that. It’s the way we treat our flour, our obsession with convenience items and lack of connection that we have to what we’re consuming.

“The industry clearly doesn’t have our best interests at heart, meaning that we have to take our health into our own hands and support those around us who don’t have the time or privilege to do the same.”

Though I realize that not everyone has time to embark on their own sourdough journey, all I’m saying is that we need to consider small-scale community solutions to reduce our reliance on industrialized products. The industry clearly doesn’t have our best interests at heart, meaning that we have to take our health into our own hands and support those around us who don’t have the time or privilege to do the same. Through supporting bakers who are using quality flour and decreasing consumption of pre-packaged snacks or bread products with unpronounceable ingredients, we can start to feel more connected to what we are eating and how it makes us feel. The solution to good bread is in its origin story — collaboration and community. The real war on bread should not be if we should eat bread or not; rather what can even be called bread.

For those interested in trying out sourdough for themselves, I recommend following this step-by-step guide from The Perfect Loaf, which was kindly shown to me from a fellow UNISG Master student, Christie Lo. 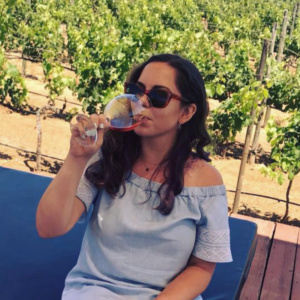 She is a recent graduate of the University of Gastronomic Sciences and very is passionate about cooking and food education. As a former elementary school teacher, her goal is to work back in her community of Los Angeles to foster a connection between cooking, gardening and both ecological and personal health. If Shelby could only eat one vegetable for the rest of her life, she’d choose bok choy.