Jail is one of the most feared places in the world. Criminals, murderers, thieves, rapists–even psychopaths, end up there and when you think of jail, a pink room is not the first image that comes to mind.

Is there a connection between people’s color preferences and their inner mental state? Alexander G. Schauss phD believed in this theory, therefore he wanted to analyze this phenomenon from the opposite starting point, “He wanted to reverse that effect to learn whether choosing shades of colors would make people feel a certain way”, tells Angelique Stehli, the American Photographer and creator of the performance Pink Cells, exhibited from May to November in Tuscany, at Castello di Volpaia, Radda in Chianti.

When Stehli was studying at Ecal, she started to investigate enclosure and incarceration and found the existence of pink prisons in the USA and Switzerland. Between all the colors, Schauss identified a certain shade of pink, able to tranquilize, demonstrating its aggression-reducing effect on his patients. He called this specific color Baker Miller Pink or Drunk Tank Pink.

The Swiss psychologist Daniela Späth developed a scientific study to demonstrate the suppression of blood pleasure and the calming effect on aggressive behavior, which inspired the American photographer to visit all the jails where this theory had been applied.

“Food is also a very attractive part of this exhibition.”

Volpaia, a  Castle built in the 12th century in the Chianti Classico area, hosts the cellars of Castello di Volpaia, one of the first organic wineries in this DOCG. It’s also a place for art, because every year, a different exhibition is presented in the buildings. This year, it was the time for Stehli’s Pink Cells. This exhibition is organized by Luziah Hennessy, founder of Art of the Treasure Hunt.

Coming into this place is like traveling into the past, and it’s normal to stay breathless in front of the beautiful hills, cypress, and olive trees. Food is also a very attractive part of this exhibition. Every November, at Volpaia, a full-bodied, aromatic–even a little tingling, olive oil is produced. Wine vinegars are also very interesting; from flowers, garden, and spices–all of them are very aromatic and persistent.

“The dish is a “jail”, because all the components inside are trapped and closed into this crunchy shell.”

The last project, in the past five years are two restaurants, founded by the Colombian Chef Juan Quintero: Osteria Volpaia, founded in 2014, and Forno Volpaia, founded in 2018. Quintero is an alumni of The University of Gastronomic Sciences in Pollenzo, Italy. He graduated from the undergraduate program in 2014 and trained in three Michelin starred restaurants such as Arzak in Spain, Hertog Jan in Belgium, and Osteria Francescana with Massimo Bottura. 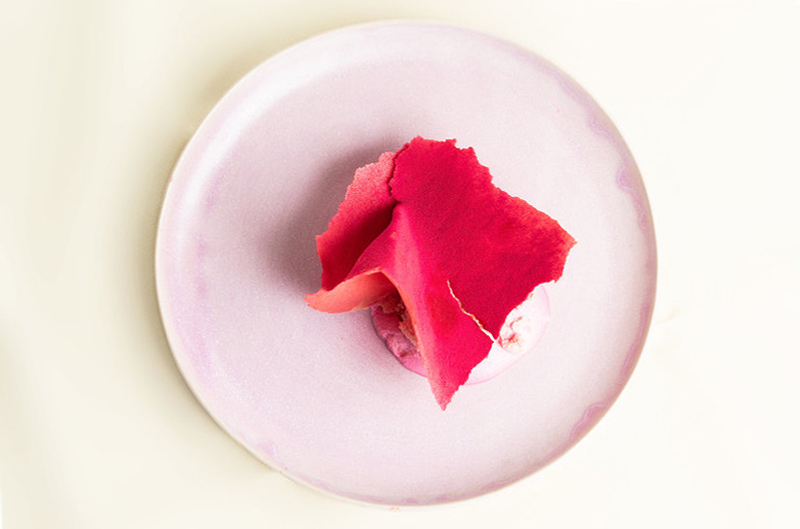 Quintero wanted to transmit the aim of the performance, translating the research and the photographer’s idea into a plated dessert. He is convinced that a chef behaves as an artist in two steps: using technical skills to reproduce pieces, like the greek etymology of art, and using cooking as a creative expression, and as a language that’s able to transmit emotions. The dish is a “jail”, because all the components inside are trapped and closed into this crunchy shell. All the elements are pink, of course, with different shades.

“It represents all of the emotions trapped into a jail.”

The dessert changes during the season. In the summer, for example, dessert is fresh and fruity; the ice-cream is made with guava (guayaba), a traditional fruit in Colombia, that’s very much appreciated by the Chef, who connects it with his childhood. Right now, in autumn, the main ice cream that’s featured has a balanced beetroot-gorgonzola base. Beetroots, grapes from Volpaia’s vineyard, and white chocolate are some other flavors that are present. Each element has a pink shade; a different texture, temperature and flavor from the sweetness to the acidity. It represents all of the emotions trapped into a jail. The whole dessert is plated on a Baker Miller Pink plate that’s made with Tuscan ceramics.

The composition of the desserts are explained in these shots, taken by David Quintero, a freelance photographer and wine lover, based in New York. 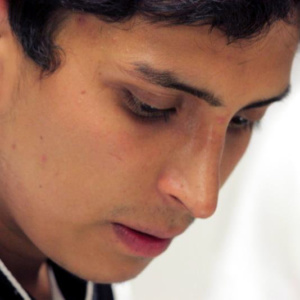 He's a chef, based in Italy and New York, who's worked in Latin America, Europe, and the US. He's a graduate of The University of Gastronomic Sciences in Pollenzo, Italy, where he developed Slow Food Ark of Taste Columbia. In 2015, he created Osteria Volpaia, in Tuscany, Italy, together with renowned winery, Castello di Volpaia. In 2018, he opened Forno Volpaia, a bakery and Tuscan products shop.