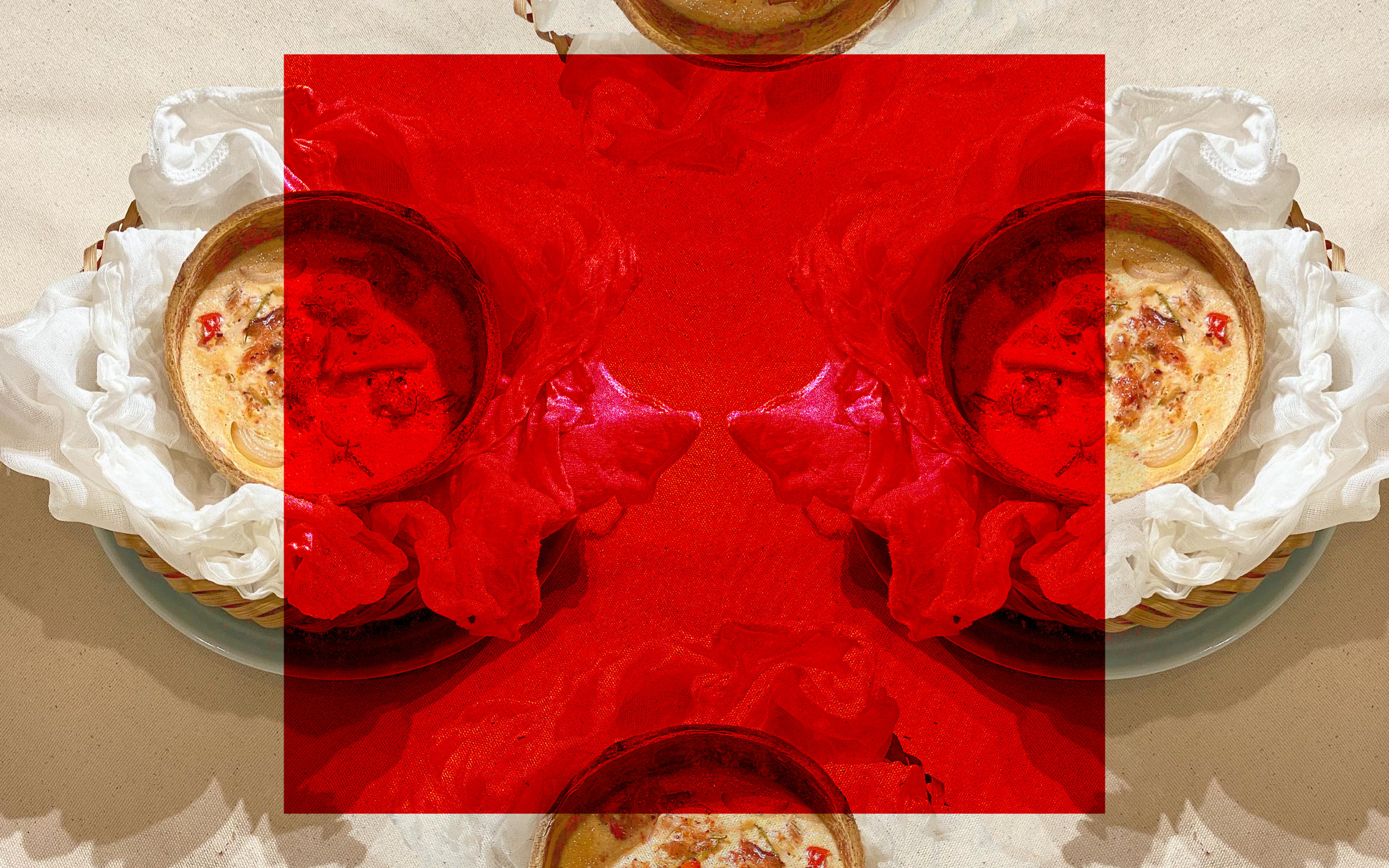 I am pretty sure that fermented foods and seasonings are essential to many cuisines around the world. In East and Southeast Asia, the charm of fermentation is in its power to enhance flavours, increase nutritional values and prolong food’s lifespan. Instead of the glorious and often featured ‘Koji’, I would like to talk about its lesser-known cousin Hongqumi (紅麴米) or red rice yeast.

Hongqumi, a Mandarin Chinese term, refers to non-sticky rice that has been inoculated with Monascus purpureus, a species of mould that produces purplish-red pigments. For centuries, it has been extensively used as a natural food colouring agent, traditional medicine and flavour enhancer in East and Southeast Asia. In fact, the record of Hongqumi production goes back as far as China’s Tang Dynasty in the 8th century. The Chinese – especially those living in parts of Fujian and Zhejiang in the coastal Southeast of China – started to domestically produce an alcoholic drink with a distinctive reddish colour known as Hongjiu 紅酒, literally translated to ‘red alcoholic drink’. It is used in Chinese medicine as it is believed to facilitate blood circulation and promote better lactation in breastfeeding mothers.

Let’s see how Hongjiu is made using Hongqumi red rice yeast, a process that takes about two months.

To start, we need sticky rice, powdered red rice yeast and a Chinese “yeast ball”, an alcoholic beverage starter that looks like a piece of marshmallow, containing various kinds of moulds like the famous ‘koji’, Aspergillus oryzae. The ratio of making Hongjiu comes down to 80% sticky rice, 20% powdered red rice yeast and one tablespoon of the ground yeast ball. First, soak the sticky rice in water overnight. Then, wash the rice well to get it clean and rinse away extra starch. Cook the rice in a steamer or a rice cooker for about 40 minutes, break up the rice grains and allow them to cool to room temperature. This step is important as any temperature over 45 degrees celsius would immediately kill the Monascus purpureus fungi. Once cooled, thoroughly mix the rice with the red rice yeast and the ground yeast ball to start the fermentation process. Place the inoculated sticky rice in an airtight container that has been clean with distilled alcohol to kill any bacteria. Pour some more distilled alcohol on top of the mixture to ensure that there will be no possible contamination, and close the lid. Keep the container in a cool, safe place while the enzymes do their job converting proteins and starching substrates into colourful and delicious flavour compounds. After about two months (three in cold countries), the Hongjiu is done and all the deep red rice residue will have settled at the bottom, while a translucent red liquid will reside on top. Don’t shake the container at this stage, as we need to separate the alcoholic liquid and the porridge-like rice residue. Use a fine piece of muslin cloth to filter the liquid but don’t press the residue as this will cause the liquid to get cloudy. You could drink Hongjiu (紅酒) straight away, but I would recommend keeping it in an airtight container and letting it age for at least a year to develop a more complex and more profound taste and aroma. This fruity alcoholic drink has a slightly sweet taste and works perfectly served as a chilled digestive.

The ruby-red residue is called Hongzao (紅糟) in Mandarin Chinese. It is one of the most useful, healthy, tasty and versatile ingredients in the Chinese culinary universe. Cooking, pickling and fermenting food with Hongzao are quite common practices in parts of Fujian and Zhejiang. The people of these two provinces believe that using Hangzao in cooking and drinking Hongjiu can help lower cholesterol, boost the immune system, regulate the female monthly cycle, and produce healthy lactation. It can also be used for several different cooking methods. The most common one is using it as a pickling agent.

Fujian style pig’s inners soup. The red colour comes from hongzao. Traditionally, this soup is made for breastfeeding mothers to help them with healthier lactation.

The history of pickling food in Hongzao can be traced back as early as the Tang Dynasty, thirteen hundred years ago. The first ingredient that was pickled was meat – pork to be exact – as animals were rarely butchered in those times, and people had to find a way to prolong the shelf life of the precious meat. Later, vegetables such as daikon or mustard greens were used.

China’s geographical proximity to Southeast Asia ensured that Chinese culture and people moved south in multiple waves throughout history. Between the end of the 18th century and the beginning of the 20th century, a flood of Chinese moved to Siam (present-day Thailand). The largest group were people from China’s coastal Southeast, who were specialists in many fields of work, thrived economically and usually settled down in the country, intermarrying with locals and bringing culinary traditions. These days, about 30% of the Thai population have Chinese ancestry, so it is not surprising that modern-day Thai cuisine has been heavily influenced by the cuisine of these migrants. Our protagonist Hongqumi also became a member of Thailand’s favourite ingredients, often known as “paeng daeng” (แป้งแดง literally means “red flour” or “red paste”). The Thai also use the word “jao” (เจ่า which derived from the Chinese word “zao” as in “Hongzao”) for Hongzao-pickled food.

The Hakka Chinese use a lot of Hongzao and Hongjiu in their culinary tradition. They are believed to have migrated to China’s South from the Central Plain in many waves since the turmoil after the fall of the Tang Dynasty. During the late 19th and early 20th centuries, the Hakka Chinese were one of the major Chinese groups that migrated to Southern Thailand, especially to the Lake Songkhla area. They brought the recipes cooked with hongjiu-hongjao with them to their new home. One of the popular Hakka-influenced dishes in the Lake Songkhla area is “oan” (อ้วน 丸) – a kind of meat and fish balls soup seasoned with the rich vermillion hongzao.

In central Thailand, where rivers and water streams are everywhere, and freshwater fish is abundant, “pla xiu” fish (ปลาซิว Clupeichthys aesarnensis – a freshwater cousin of sardine) and bighead carp are usually being pickled. Types of mackerel and other marine fish are used in the maritime South, as well as small krills that turn into ruby-coloured shrimp paste called “khoei chalu” (เคยฉลู). This type of red shrimp paste is produced in parts of the Andaman coastal areas of Southern Thailand and on Malaysia’s West coast.

To pickle, you need to clean your fish or krills and make sure there is no excess liquid that might cause the fermentation to fail. The fish needs to be salted first and put out to dry in the sun for five to six hours. Submerge the salted fish in a Hongzao bath in a container with a bit of Hongjiu and generous amounts of salt on the top to prevent contamination by unwanted toxic organisms. Close the lid tightly and keep it in a safe, cool place. The fermentation will start immediately and should take around a month to fully mature. After a month of fermentation, take the fish out of the container and chop it into small pieces. In a mixing bowl, mix the chopped fish with duck eggs (you could substitute them for chicken eggs but duck eggs are more traditional and richer in flavour), minced pork belly, chopped shallots, thinly sliced lemongrass, julienned kaffir lime leaves, bird’s eye chillies and coconut cream. Steam the pinkish mixture until thoroughly cooked, which might take up to 30 minutes and enjoy a savoury custard with an umami bomb in its centre.

Salted mackerels in the bath of hongzao – ready to ferment. 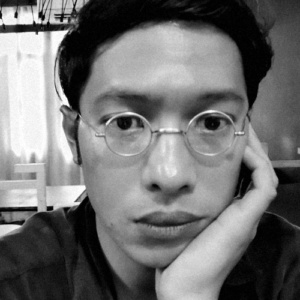 Master in Food, Place, and Representation. A Cantonese-Vietnamese now based in Bangkok, Thailand. Food researcher and anthropologist. Owner and founder of Tonkin-Annam, a Vietnamese restaurant in Bangkok that served homegrown herbs and vegetables.