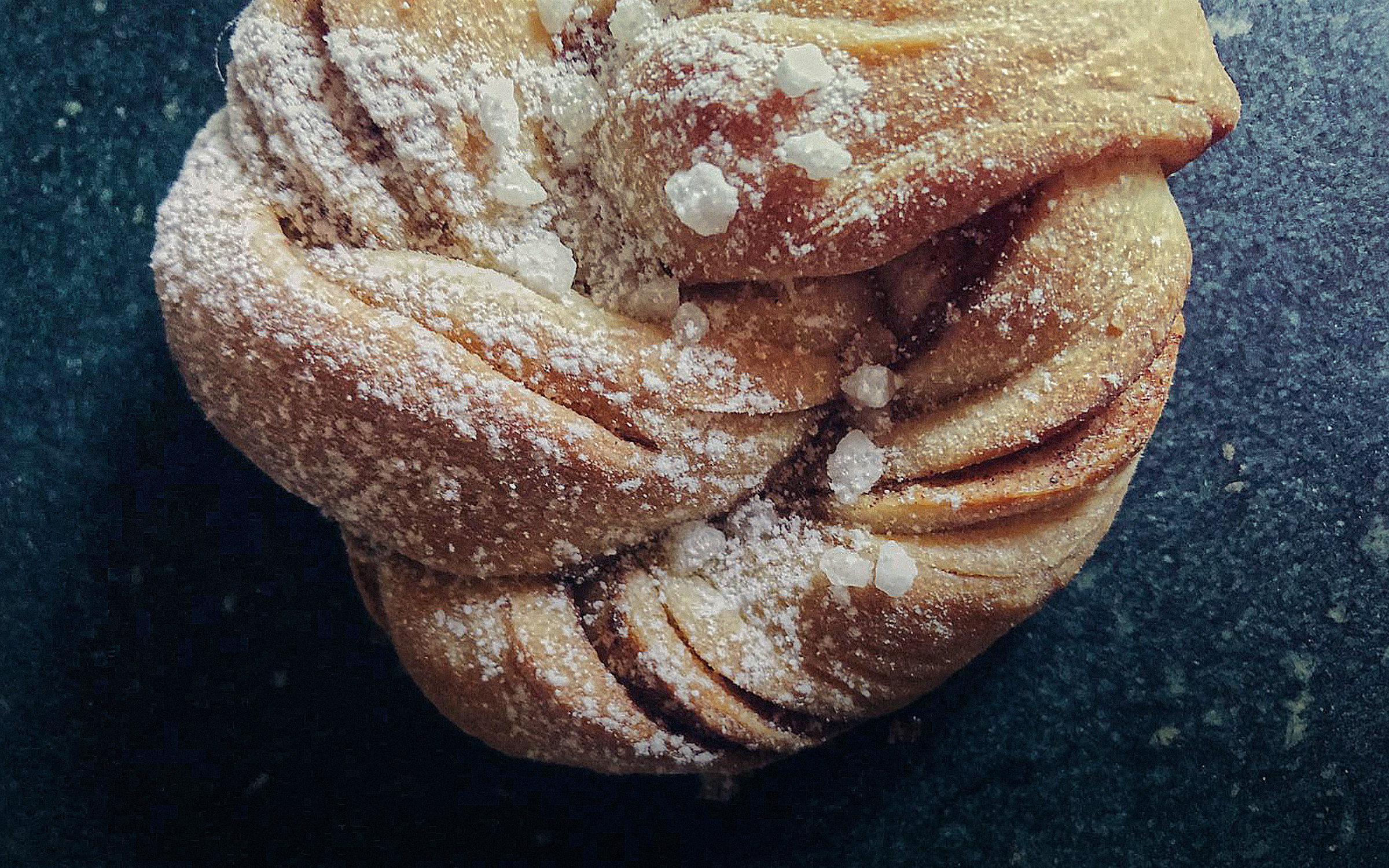 Long before you have even fully opened the door to the little café, its scent has reeled you in, positively enchanting you with its aroma of warm, freshly baked dough, melted butter, caramelized sugar and – of course – cinnamon. The faint coffee note comes later, weighing the air down, as you fully step into the room.

It’s sparse, industrial-looking and features a collection of mismatched ovens from which the scent originates. There is an upper landing too, which you climb – a reverse Alice down the rabbit hole – to get a better view of what’s going on, for you can’t help but be entranced by the happy atmosphere within this place, so full of laughter and contentment; can’t help but feel all remnants of stress leave you in one all-encompassing out-breath, as you sink down in one of the armchairs and close your eyes for a fraction of a second.

Though it might very well seem too good to be true, the Swedish cinnamon bun day – or, kanelbullens dag as the locals would say – is neither a joke nor a dream. Instead, it is an institution that has existed for almost 20 years, having been created already on October 4th, 1999.

Hidden as it will remain for the moment, the story behind this appointment is just as flavourful as one would expect from a pastry classic as beloved as this, and yet, we must start from the beginning: Around 2000 B.C., the first mentions of Ceylon cinnamon could be found in Chinese writing, which marked the starting point of the spice’s long journey through the world.

Butter, meanwhile, equally as old as the spice and having been written about in the Bible, was already local to what today would be considered European realms. Even yeast bread could be found in old Egypt at around 1000 B.C., leaving only one ingredient missing from what already resembled a mise en place for the perfect cinnamon bun: sugar.

“The Swedish cinnamon bun day – or, kanelbullens dag – has existed for almost 20 years, having been created already on October 4th, 1999.”

From the 18th century onwards, these ingredients were put together to resemble different family members of the modern Swedish cinnamon bun. The British, for example, created the Chelsea Bun, a cinnamon and dried-fruit filled yeast-bun that used to be a favourite among the members of the Royal House of Hanover.

The Germans too created their version of cinnamon snails – aptly named Zimtschnecken -, while the United States of America came up with the Philadelphia Sticky Buns and the North American kind of cinnamon rolls. Though, bearing the same name as their European cousins, American cinnamon buns could not be further from what a Swede would recognize as their kanelbulle. Usually much fluffier and created in a snail shape, American buns are covered with a thick coat of sugar icing, while the Swedish equivalent uses a knotting technique for most of their buns and sprinkles them with pearl sugar instead of icing.

While the modern version of the Swedish cinnamon bun has just about celebrated its hundredth birthday, Swedish baking used the typical ingredients as early as the 1500s, making the mix of sugar, butter and cinnamon a classic combination in many different kinds of bread and cakes. Similar to the English Chelsea Bun, Swedish cinnamon cakes were favoured by both, commoners and royalty, as proven by King Gustav Vasa, who used the winning combination for one of his wedding cakes.

After having enjoyed the atmosphere for a few moments, you make your way back down the winding staircase, marvelling once again at the simplicity of the place. You join the little queue of waiting customers by the counter, relieved by having gained some time to think about the choice you are about to make, as row upon row of different flavoured buns come into view.

There are cardamom buns, decorated with finer sugar and spice, the classic cinnamon variety, at a reduced price to mark the occasion of the 19th cinnamon bun day, and whole baskets worth of other flavours, like the saffron kind, which will have its time in the spotlight closer to December, when Sweden celebrates Saint Lucia Day.

In the end, you can’t help but go for the classic, ordering a big cup of milky chai tea to go with it and taking your order back upstairs. For a second, having sat down once again at your table, you regard the bun and consider it too pretty to eat, so expertly made and knotted into its final shape. Then, as its subtle scent hits you, it brings you back to your senses and you take your first bite.

In Sweden, cinnamon buns are closely connected to the countries’ coffee culture, which started with coffee houses in the 1700s, in which men used to sit and talk about politics and literature. With yeast arriving in the mid-1800s, coffee started to be accompanied by sweet bread, which became even more common as wheat prices decreased and ovens replaced open fires.

Finally, during the 1900s, coffee parties replaced fancy dinner gatherings, leading to the Swedish fika – a coffee date with friends, as a means of socializing while having something to eat and drink –, one of Sweden’s most famous traditions. With this cultural background in place, the traditional Swedish cinnamon bun gained popularity and became a well-liked treat in bakeries at around 1920, while home bakers started indulging in homemade versions of the pastry from the 1950s onwards, when the prices for ingredients reduced, due to a better economy.

“Today, cinnamon buns are even more than that, as they help generate a multitude of jobs each year and bring people together in a new sense of community”

Naturally, the cinnamon bun is also connected to a multitude of cultural and personal memories. Birgit Nilsson Bergström, from the council of Swedish Home Bakers (Hembakningsrådet), remembers: “My parents were farmers and my mother […] made the most delicious buns and everything concerning bread, cakes… I remember coming home from school in the afternoon, I could feel the fragrance of freshly baked buns in a distance from the house – stunning! And welcoming! My mom used to serve the bun, still warm, together with a glass of cold milk.” She further explains how the cinnamon bun is regarded as more than just a delicious treat by most Swedes, because of such positive memories: It ultimately is a way of caring and love, like an edible hug received from a loving mother.

Today, however, cinnamon buns are even more than that, as they help generate a multitude of jobs each year and bring people together in a new sense of community: The Oxford Research claims, for example, that 266 jobs are created through the cinnamon bun day each year in Sweden and that the day’s effects on the Swedish economy lies at around 377 million SEK (about 36 million euros), with baker’s selling approximately seven million buns and home bakers knotting another two million themselves. In the end, the total number of consumed cinnamon buns amounts to an average of one bun per person in Sweden.

Kanelbullens dag also creates community, as people up and down the country start baking together or take part in a yearly competition of making the best buns or creating them in a new way, which is especially highly regarded by school classes and children. All in all, with the Swede’s love for their pastry so very obvious, we may return to the story of how the cinnamon bun day got appointed: The aforementioned Hembakningsrådet wanted to select a treat to celebrate their 40th anniversary and – how could it have been any different – with the joy and affection most Swedes hold for their cinnamon bun, a special holiday was created, which has lived on ever since. Whether there is also a connection between the Home Bakers Council’s location in Gothenburg and the fact that the city houses the Hagabulle, the biggest of all cinnamon buns, will remain to be investigated for another day …

If the scent alone has made your mouth water, it is nothing compared to the taste that fills your mouth the second you bite down on the beautifully soft bun. The decorative pearl sugar gives a crunchiness to the pastry that adds extra interest to the already formidable taste – sweet, a little spicy from cinnamon and cardamom, the latter hiding as a secret ingredient in every single one of the buns. The bottom, though, where melted butter and caramelized sugar have formed a lovely crust might be your favourite part. You choose to chew it slowly, not wanting the experience to end and revelling in every single second of it, tasting the bun on its own and then in combination with the chai latte you ordered – a perfect pairing due to the spices present in each.

You bite down again, only to find the last bit of the bun in your mouth, already gone, leaving you wanting more. And so only one questions remains, as you wipe your hands on a napkin: should you go down for a second helping or try the buns from down the road? Hadn’t you heard good things about them too? Aren’t you curious how they taste in comparison to these cinnamon buns? And really, wasn’t it your obligation, your duty to try as many cinnamon buns as possible during kanelbullens dag? It is, you decide, packing your bags in the pursuit of happiness, the pursuit of yet another edible hug. 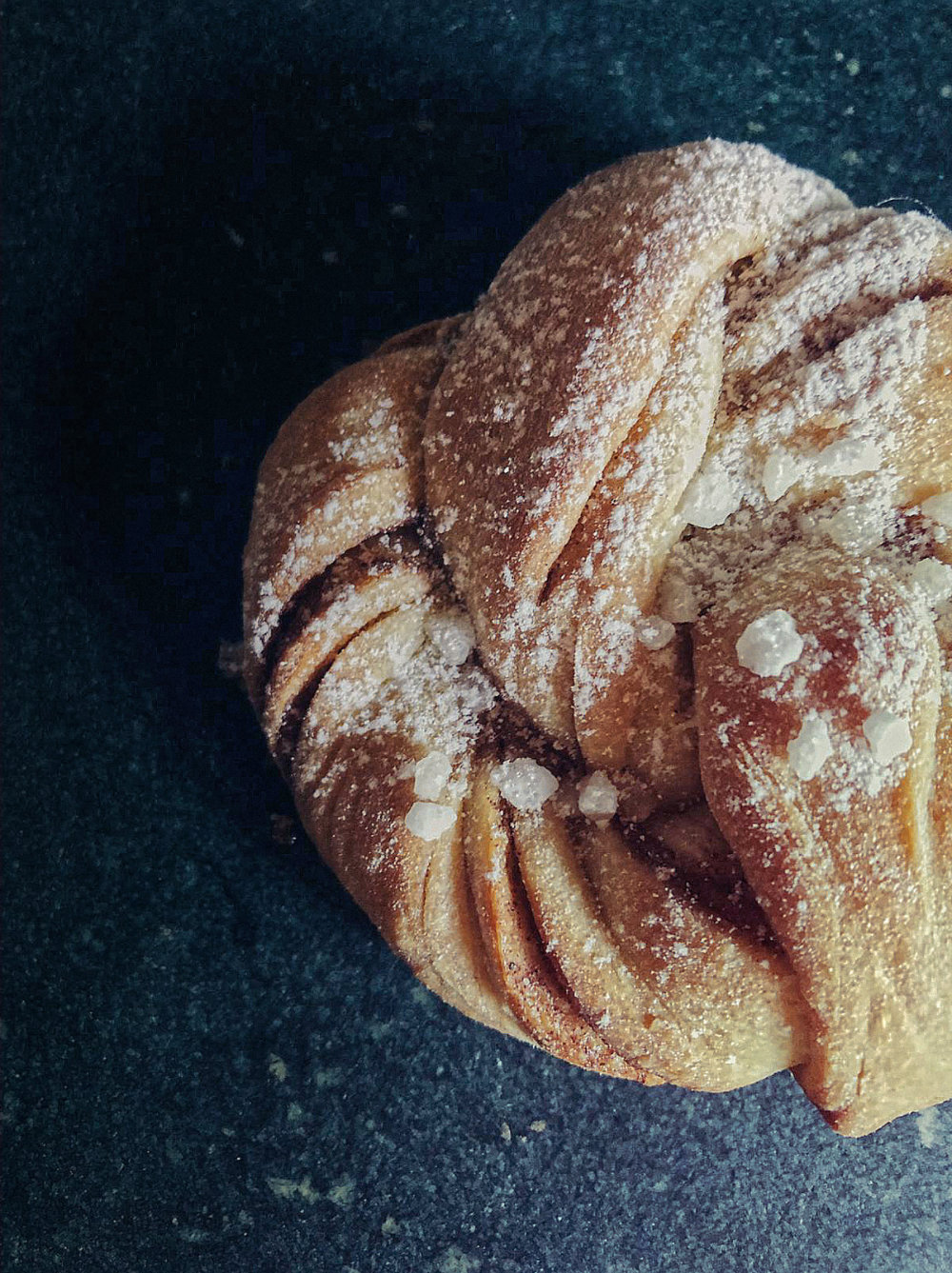 *I interviewed Birgit Nilsson Bergström from the Council of Home Bakers, who was kind enough to send me her very best cinnamon bun recipe. Now you can have your own edible hug in the comfort of your own home.

Mix all the ingredients in a bowl. Powerfully process the dough with a machine for at least five minutes, until the dough becomes smooth. Let it rise under plastic for 30 minutes. Stir together the filling. Take the dough out and roll it flat. Spread the filling on top of it. Roll the dough into a long roll and cut it into 20 pieces. Put the pieces on baking paper on a baking plate. Let it rise for about 30 minutes. Turn the oven on 250° C.

Whisk an egg and carefully brush it on the buns and sprinkle pearl sugar on top. Bake in the oven for around 5-7 minutes. 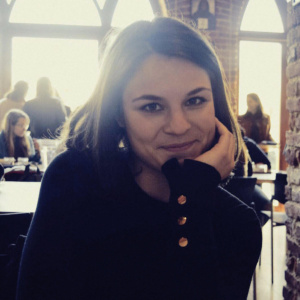