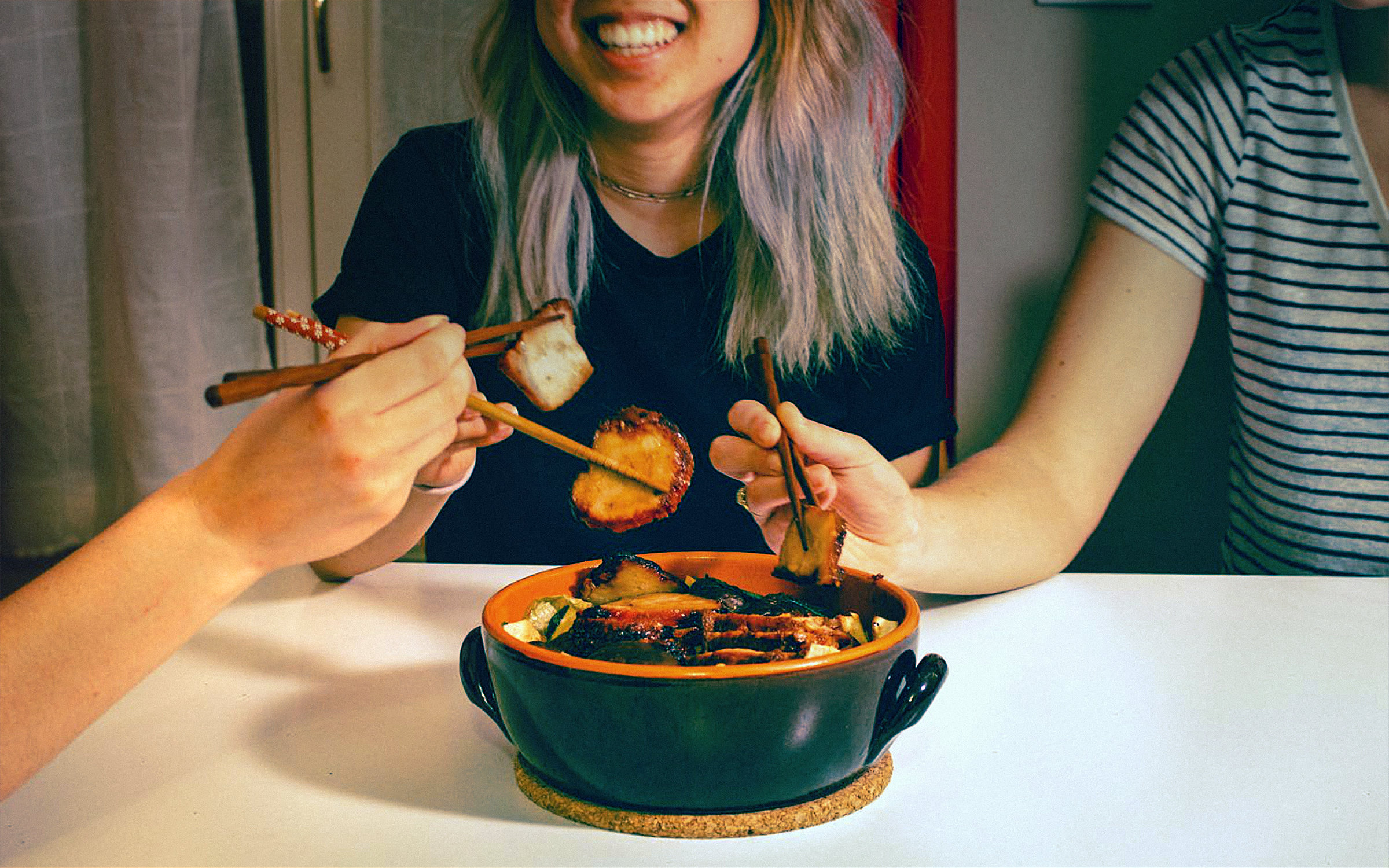 I was born and raised in Ontario, Canada, but my family roots lie in Hong Kong. As a second-generation immigrant, I’m faced with the question of how to maintain my cultural identity in a society that constantly challenges how one should be in order to fit in with the local norm.

Initially influenced by Western food bloggers, I decided to become a vegetarian for various personal reasons. Unfortunately, meat – especially pork – is omnipresent in the traditional Cantonese dishes I grew up eating, so much so, that the Chinese word for home (家), is literally an image of a pig underneath the roof of a house.

Whenever I visit my family in Hong Kong, a dreaded awkwardness surfaces when the rest of my family eats roasted pig while I sit and wait for my stir-fried vegetables. It’s obvious. I’m Canadian-ized. On the other hand, I think it’s natural to enjoy the cultural aspects of the place where you spent most of your life – such as the arts and food – even if it’s a different country than that of your family heritage. But, being entrenched in the culture of your host nation shouldn’t be mistaken for cultural rejection. It’s simply the desire to savor the local culture and life — and to feel a sense of belonging.

Therefore, as I grow older, I’ve become determined to prove that my plant-based diet and my heritage can co-exist. Char siu, Chinese barbeque pork, is a dish that I used to eat with my family during special festivals and occasions before I became vegetarian. To make char siu, pork is marinated in a sweet BBQ sauce made of honey, hoisin sauce, soy sauce, red fermented bean curd, Chinese five-spice and rice wine. Luckily, there’s also a vegetarian version of the classic dish, which is called soh char siu – ‘soh’, meaning vegetarian – and which is made using wheat gluten to create mock meat, also known as seitan. The marinade is generally the same, although the hoisin sauce has to be substituted with a vegetarian-friendly version.

During Lunar New Year, family and friends usually gather to share a poon choi: a Chinese casserole composed of many ingredients, strategically layered on top of each other. In my family, we like to add char siu to our poon choi. Since I’ve become vegetarian, we include both char siu and the vegetarian version in the casserole so the whole family is still able to partake in the celebrations collectively. As I believe that food is a form of cultural maintenance, I still occasionally cook meat dishes for my parents when I see them or during New Year preparations, to show filial piety.

As a Hong Kong-Canadian vegetarian, I find comfort and a form of connection when cooking and sharing traditional food from my heritage with my family, despite our unique and individual cultural experiences. 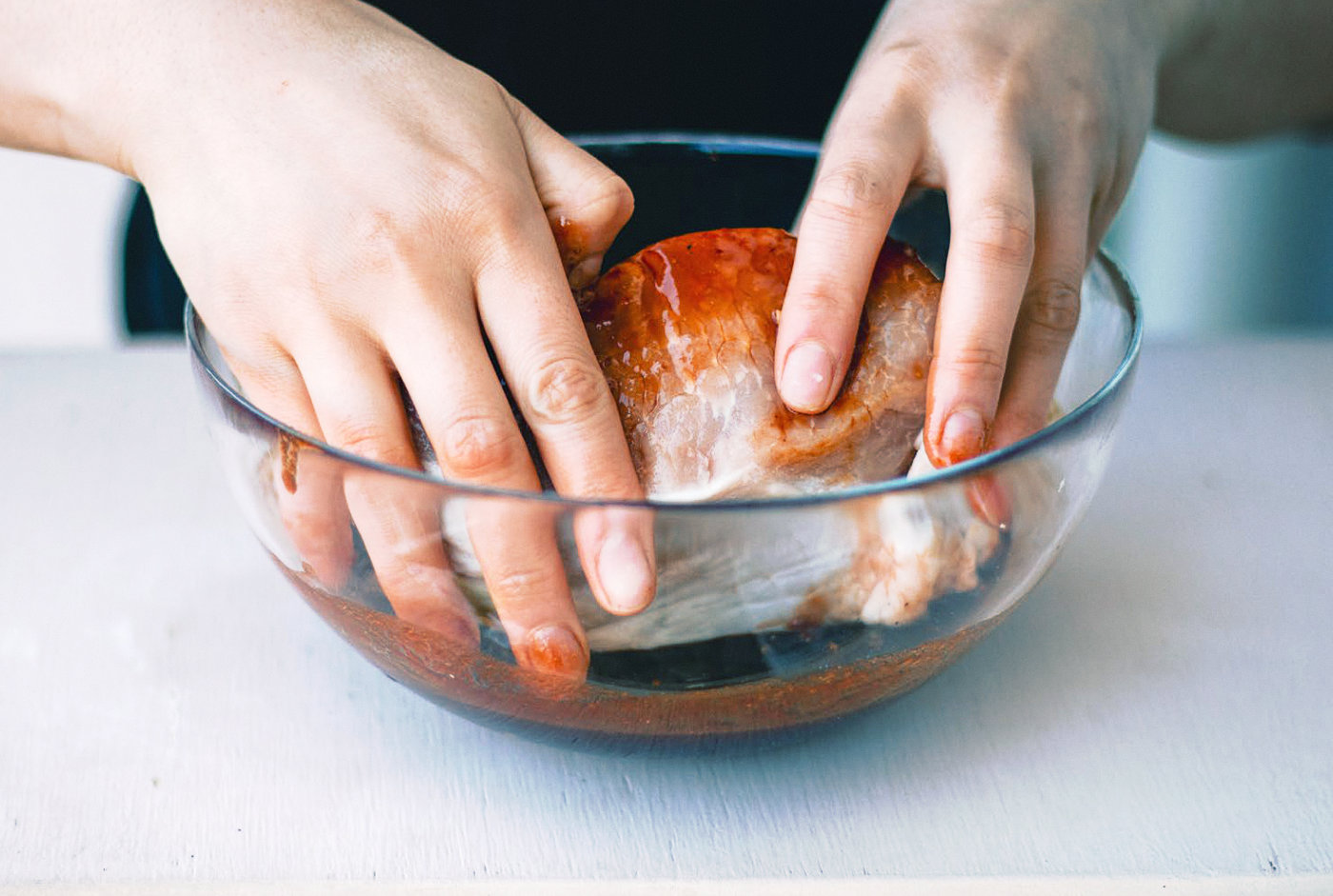 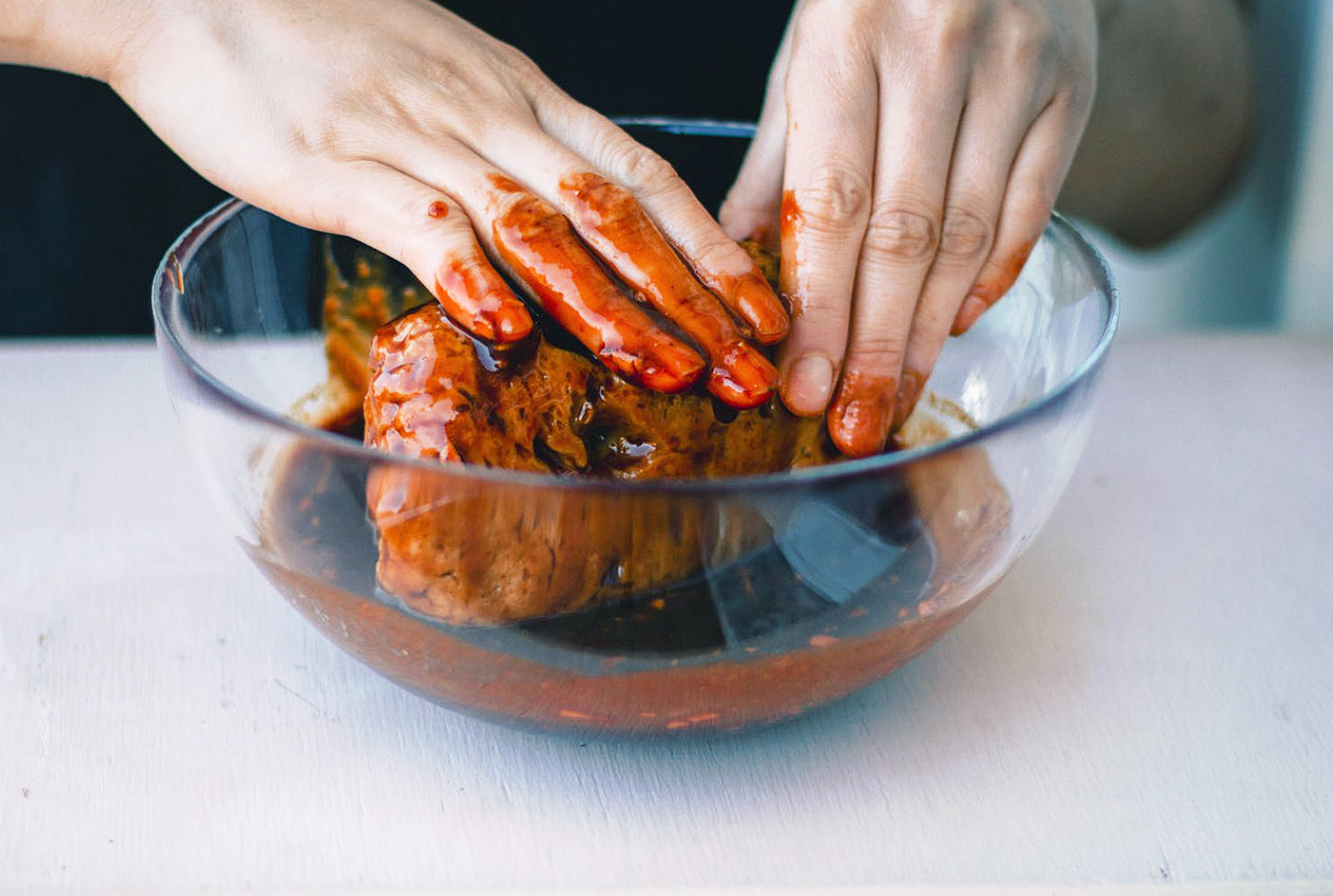 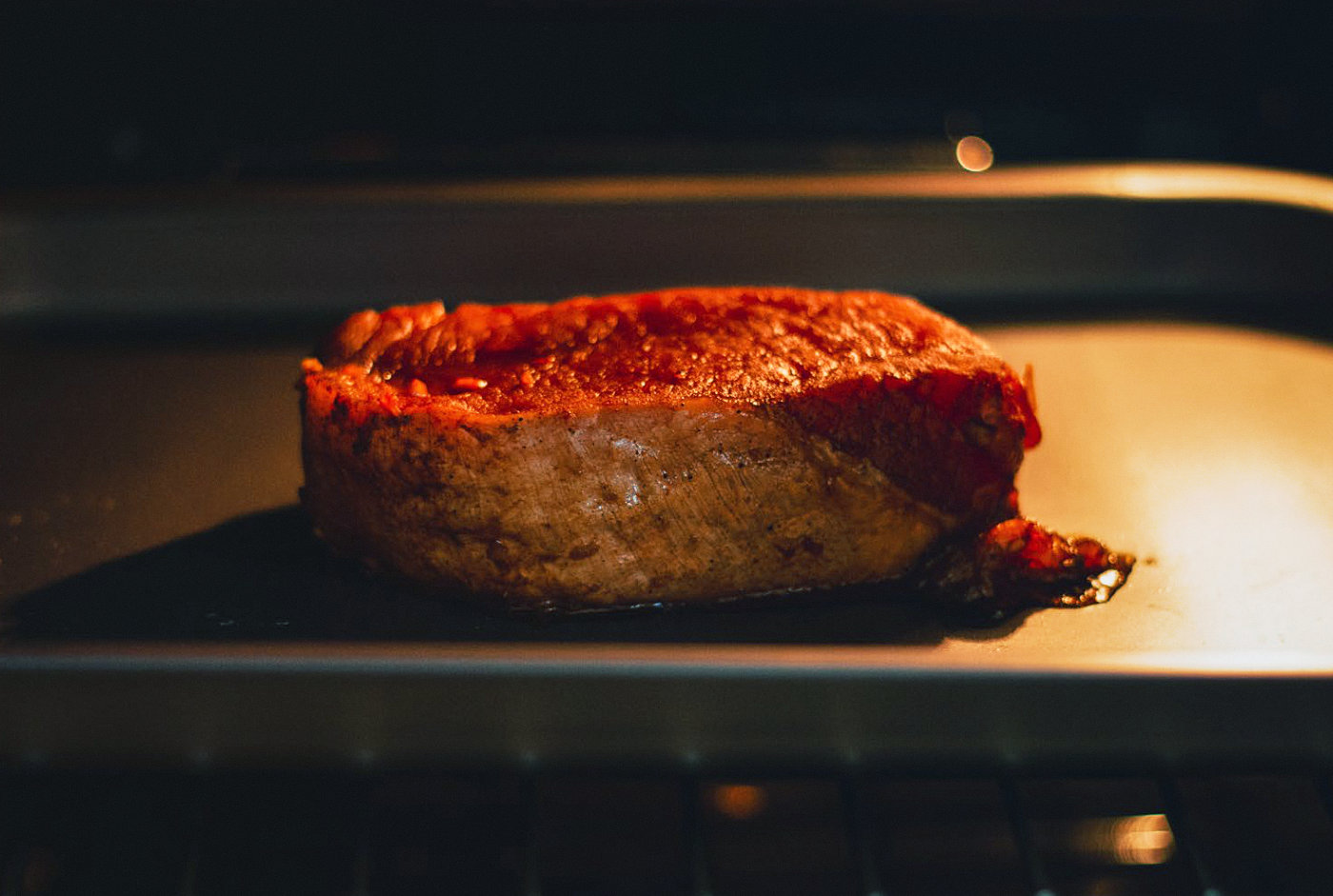 Cooking: roasting the pork in the oven. 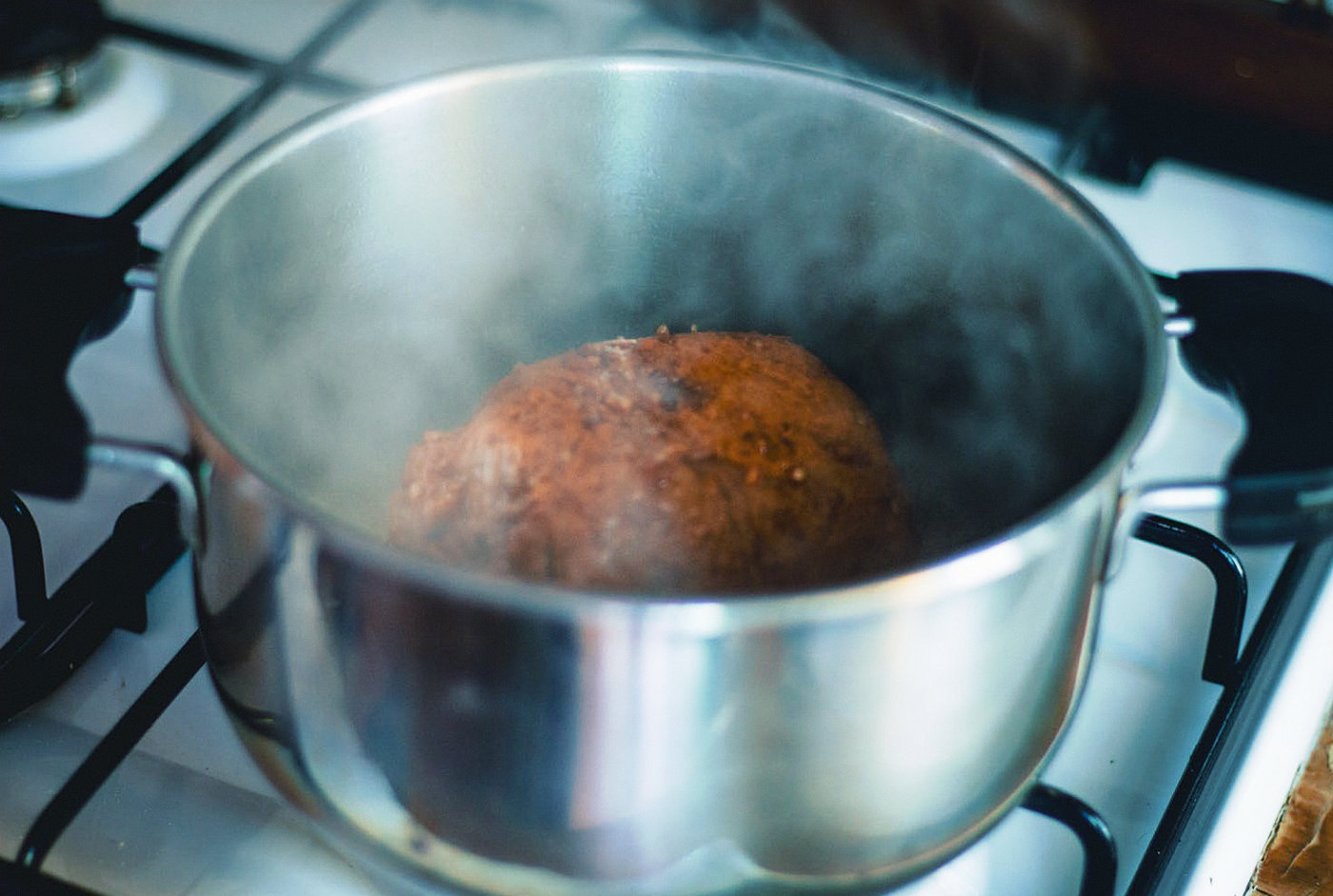 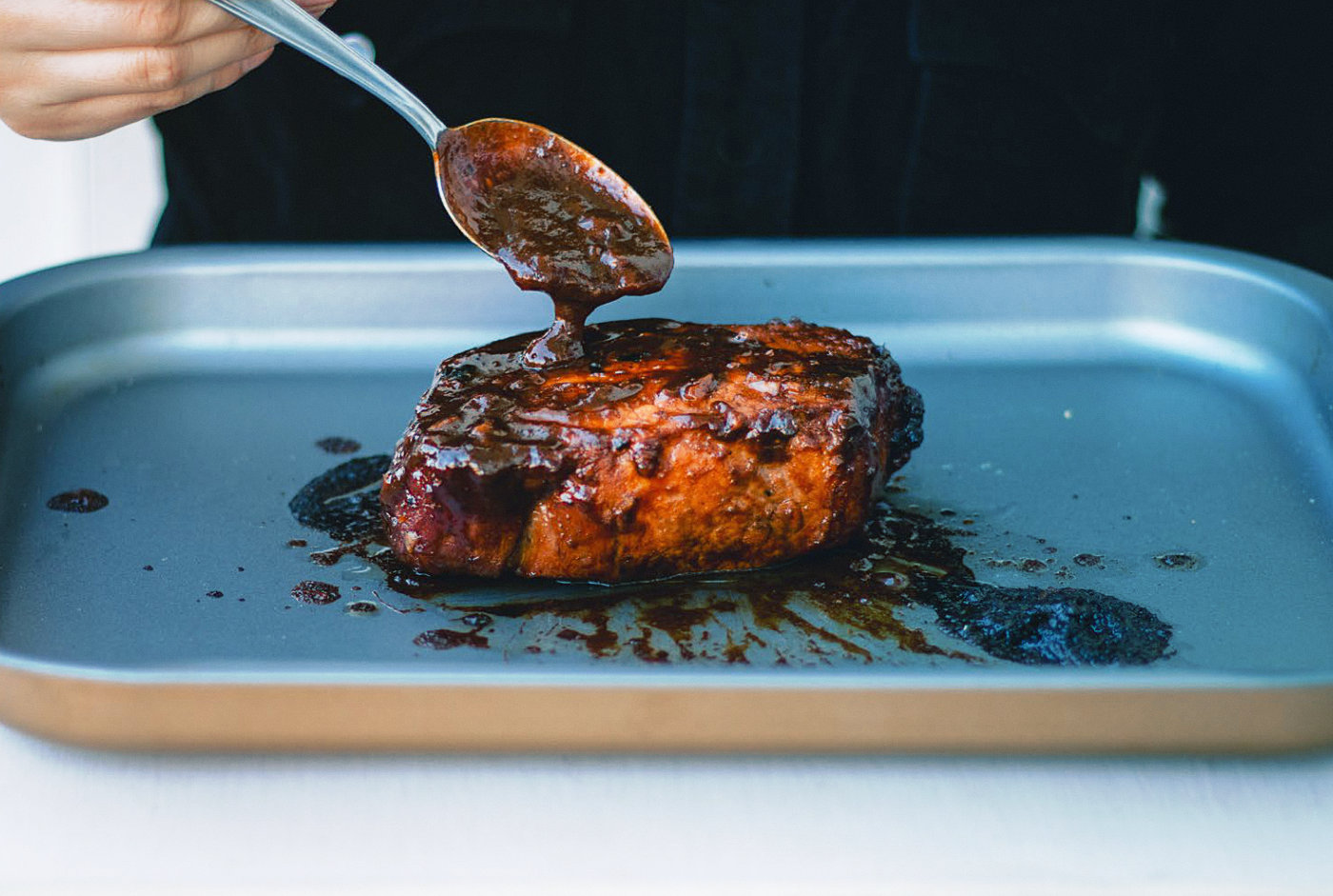 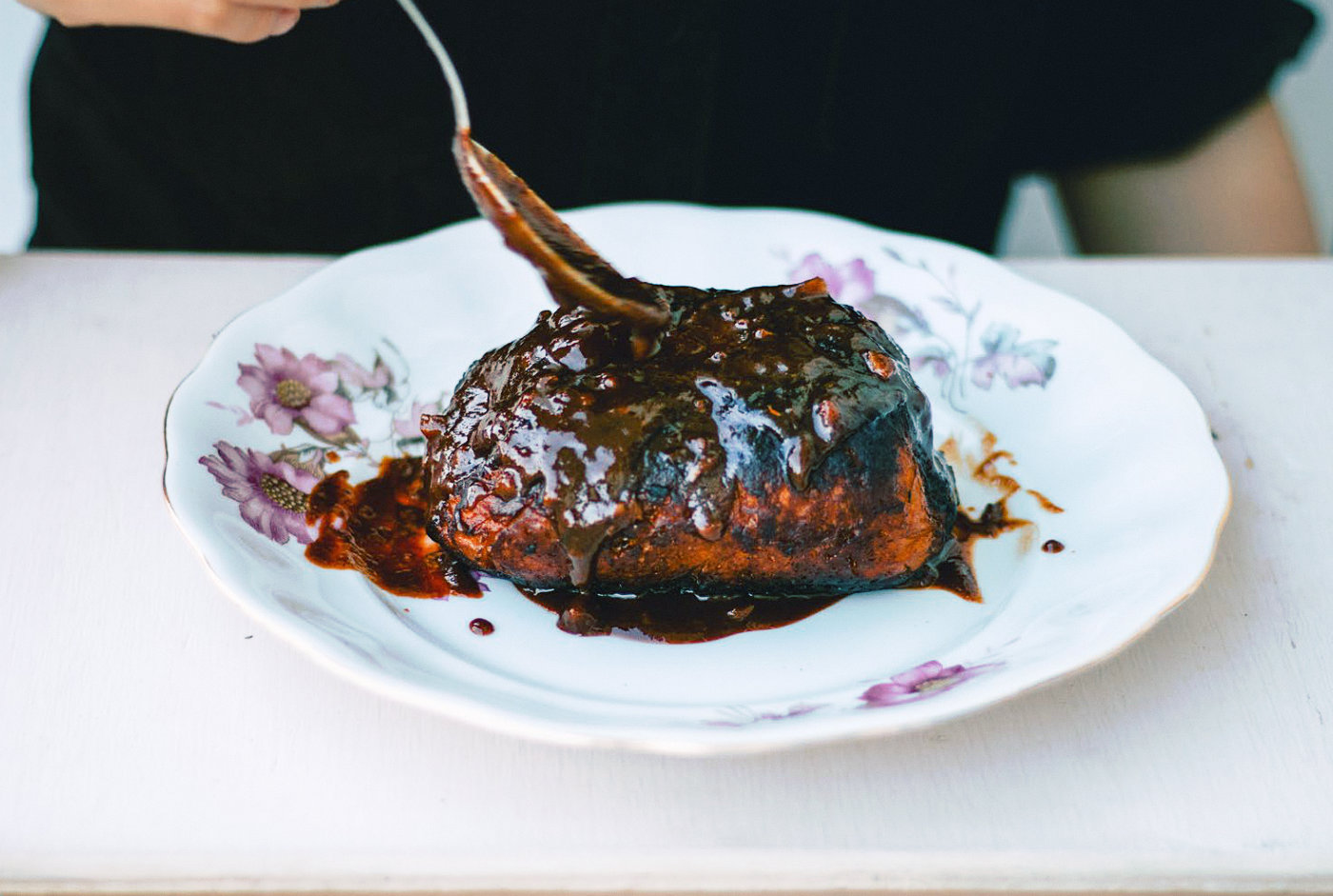 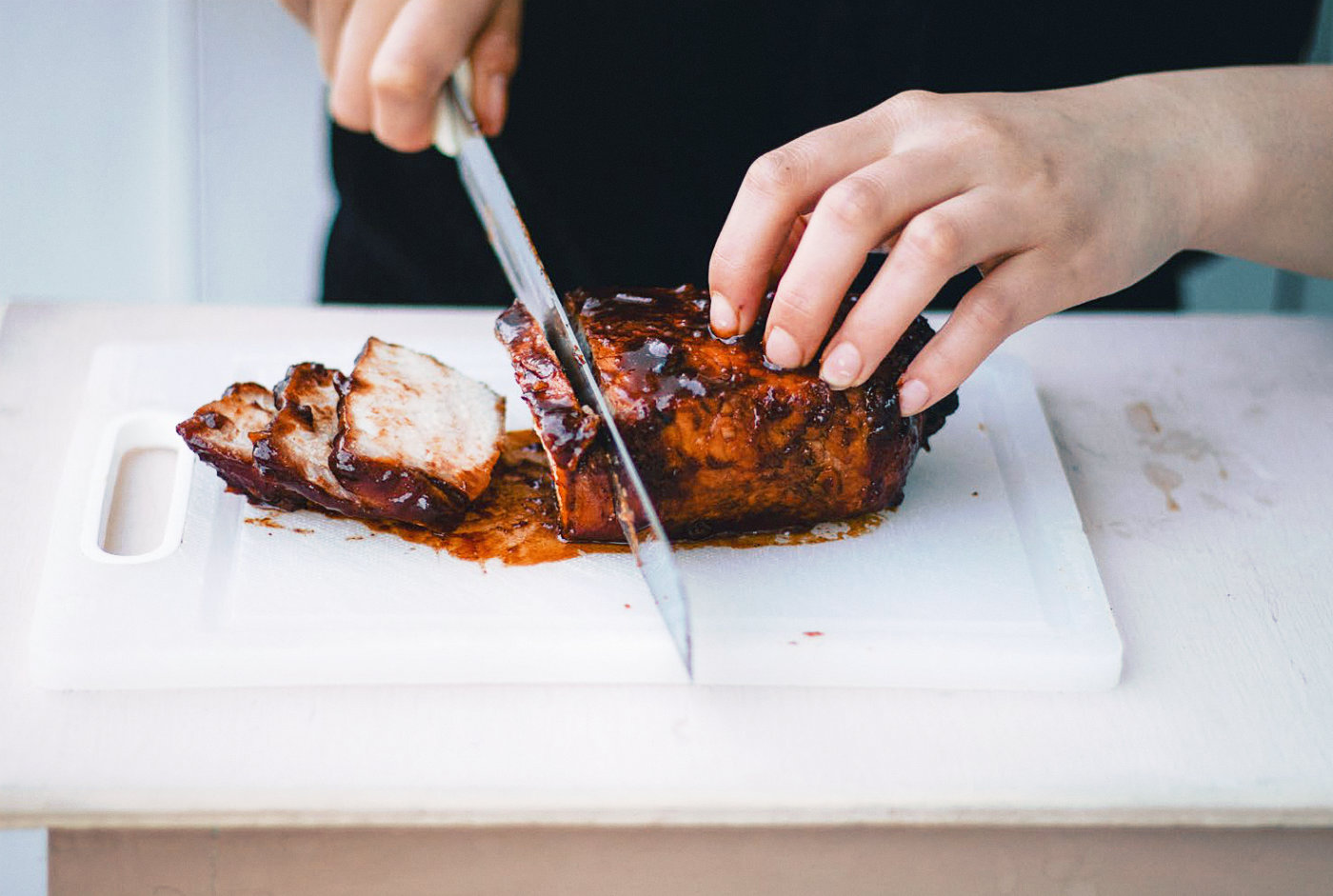 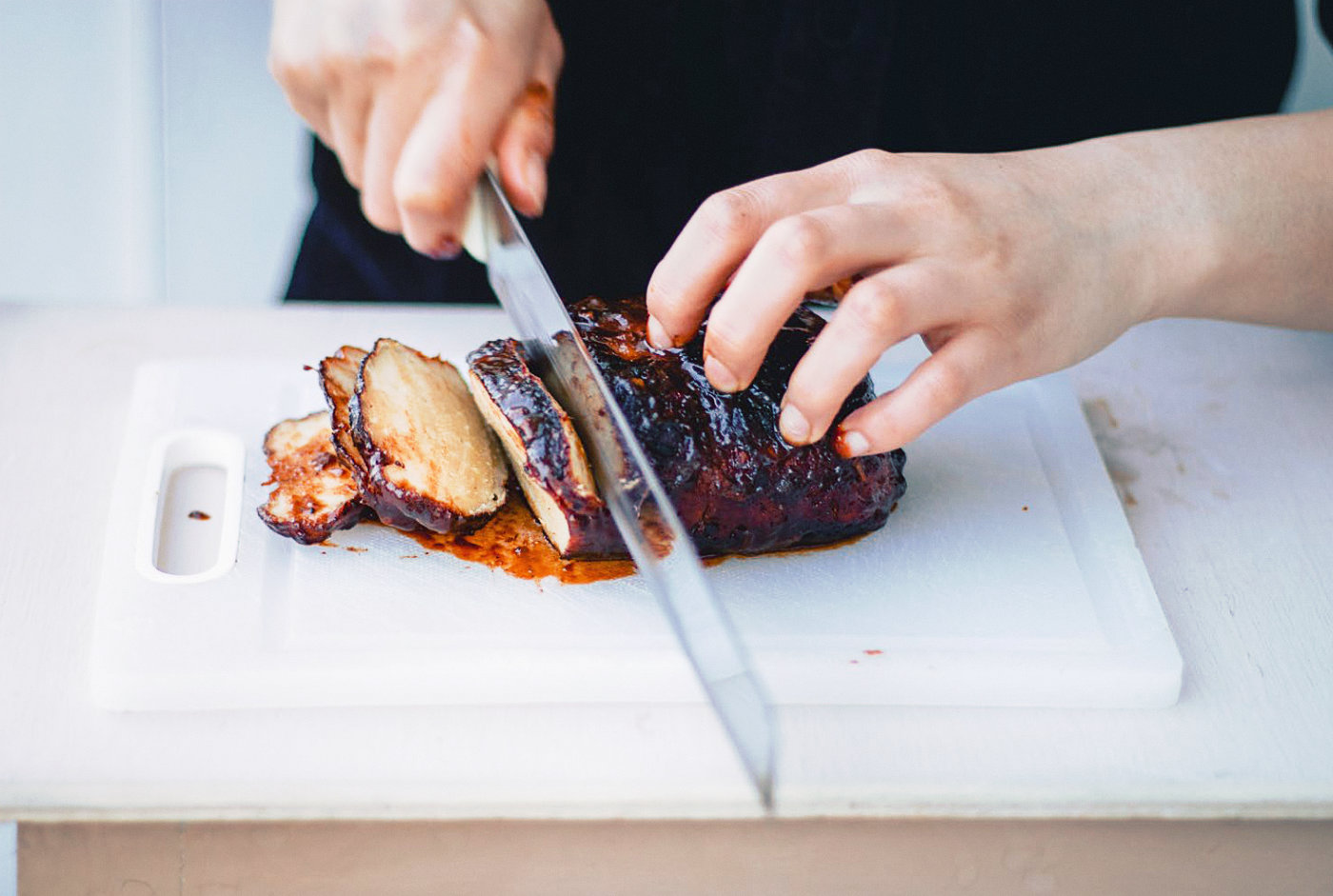 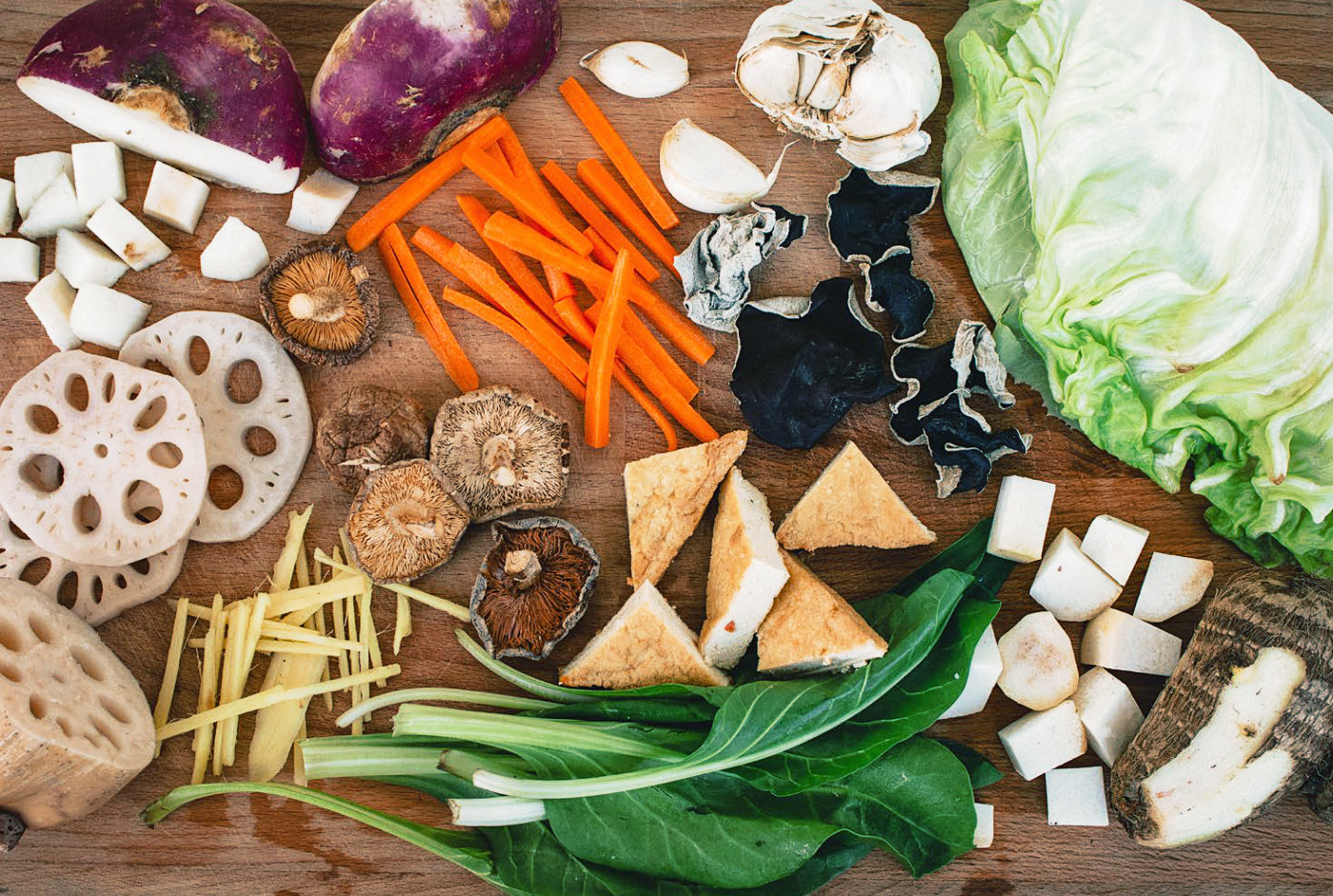 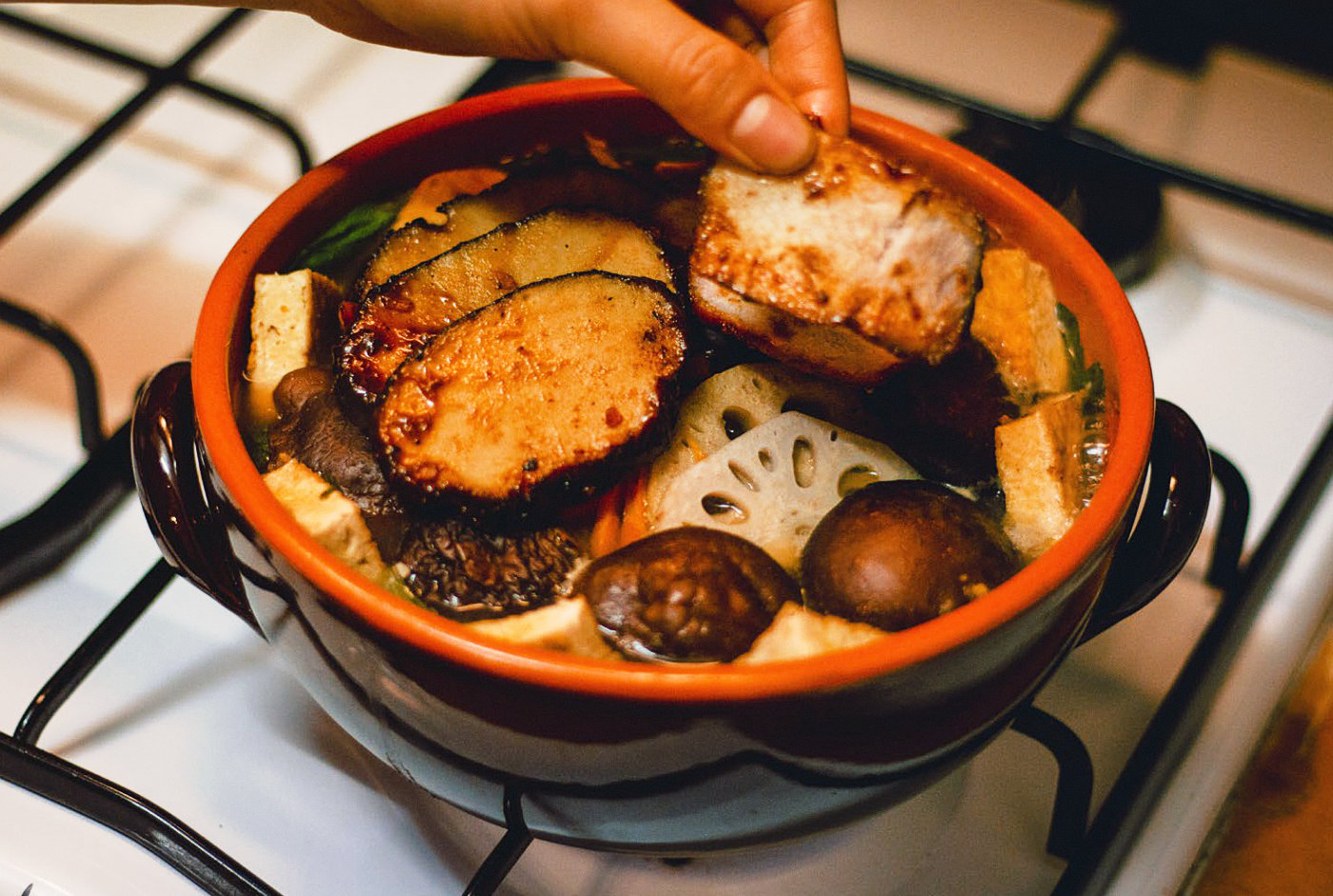 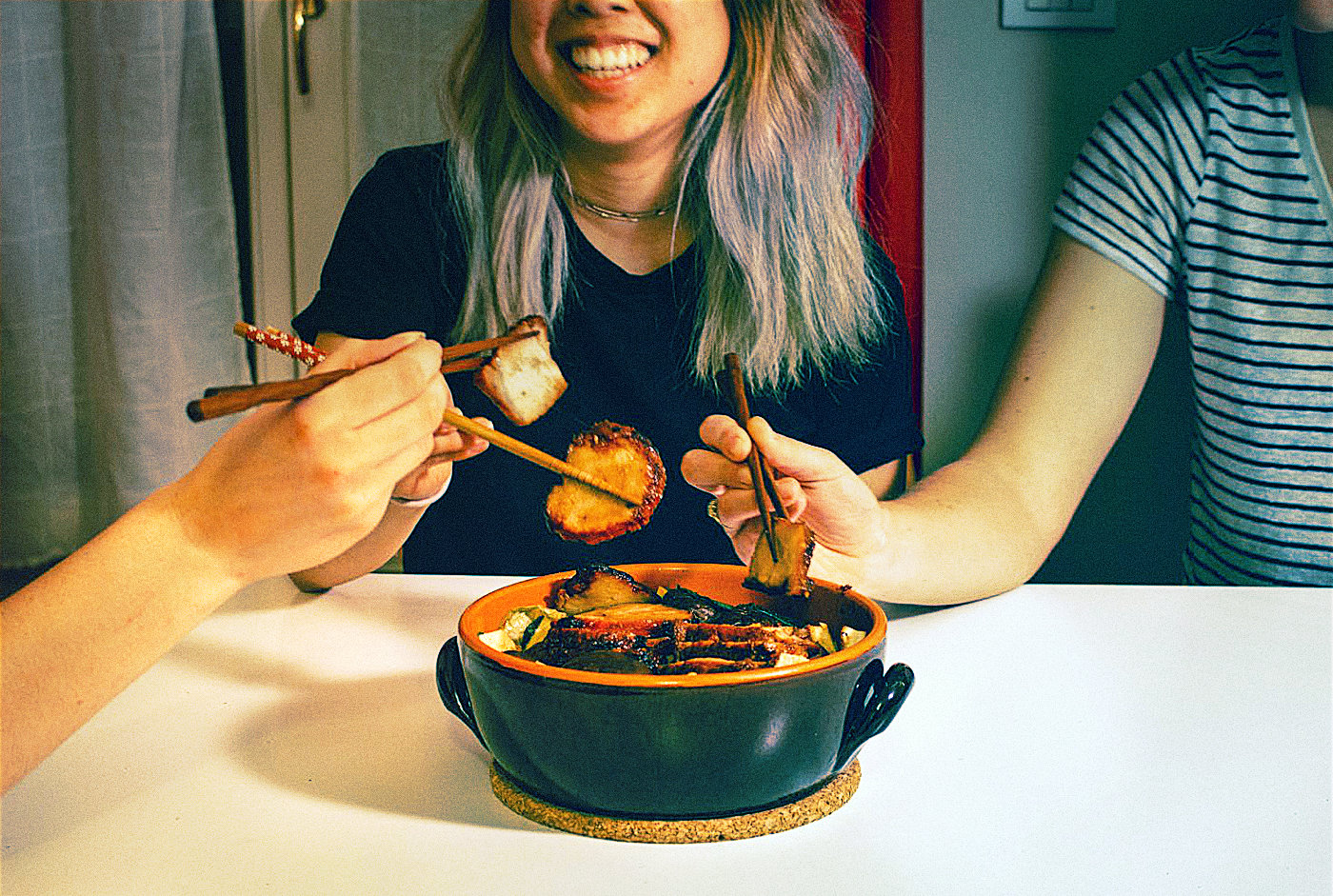 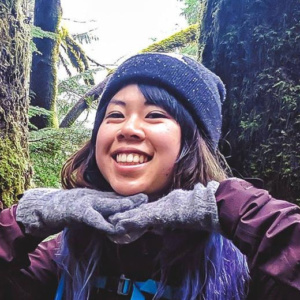 Christie is from Toronto, Canada, with family roots in Hong Kong. She did a master student at the University of Gastronomic Sciences. With her background in user experience and visual design, she is interested in applying her skills to design a sustainable food system that provides dignity to people and to ingredients. She is currently working on a documentary series that shares people’s connections with their food and identity.