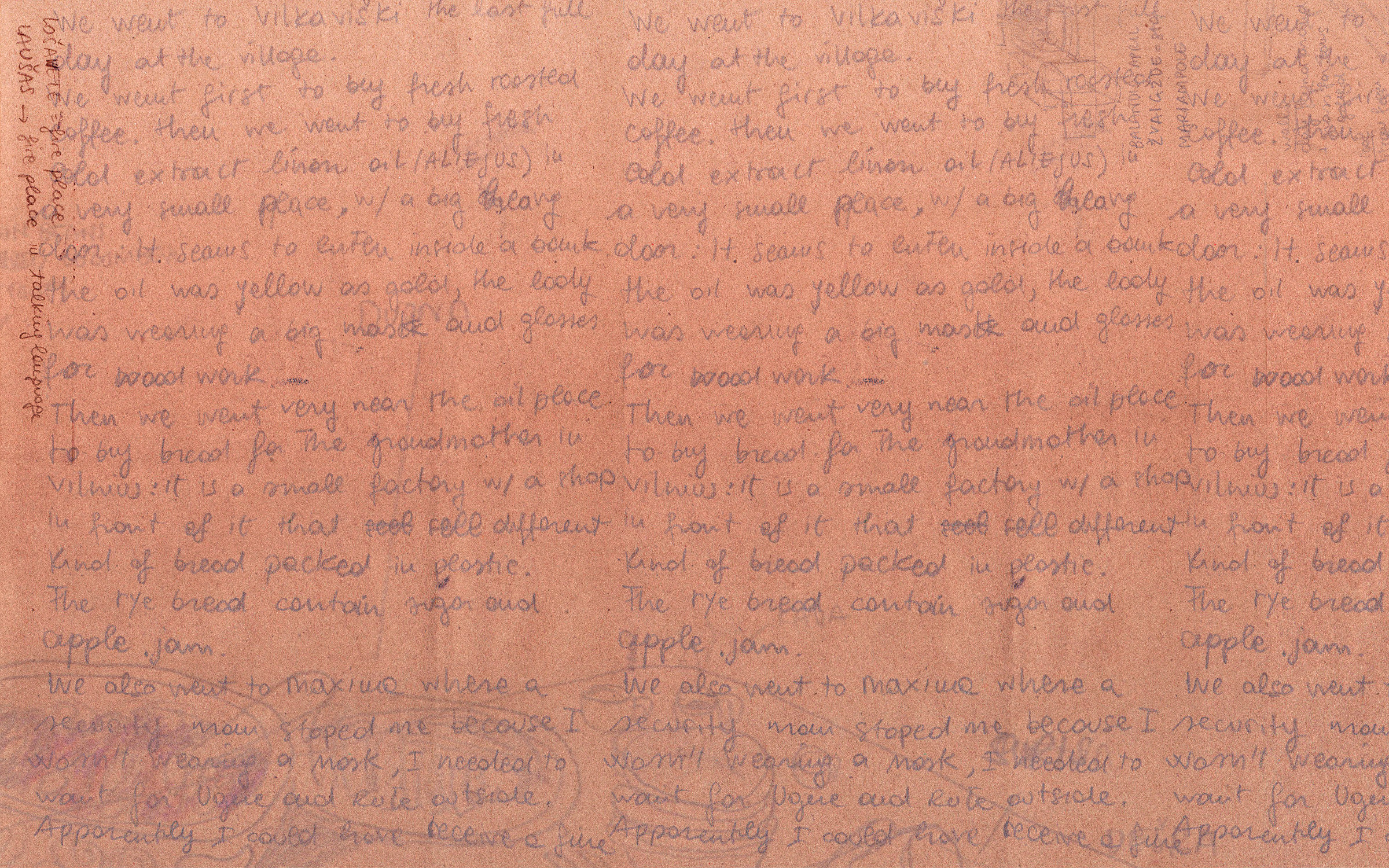 I spent the very first quarantine in Lithuania. For two months in the spring of 2020, I stayed with my friends Ugne and her husband Gediminas, as well as Gediminas’ sister Ėglė in their big house, situated a little outside Vilnius. Every day, my curiosity towards Lithuanian culture and food traditions grew as I started to forage and to observe the rituals of the people I was living with. I decided to register some of these experiences through drawings and writing instead of digital photography and to take my time to observe every little detail.

Together with Ugne and Gediminas, I went to visit Ugne’s parents, who live close to the Russian and Polish borders with Lithuania. When we arrived in the morning, we sat at the table outside and had breakfast together.

We set the table with all different kinds of goods. Rye bread (ruginė duona) with caraway and dill seeds that we made at home in Vilnius. A wood board for cheese (suris) and smoked sausage (dešra) from the neighbouring farmers and fresh butter (sviestas) from a local cheesemaker. Ruta, Ugne’s mother, prepared a salad with the most delicious products: boiled scarlet runner beans, diced homemade pickled cucumbers, grated lightly-cooked beets, salt and oil. Very fresh, tangy from the pickles, sweet from the beets and beans, and altogether comforting. There were also two cakes: a very traditional one, Šimtalapis, made by Ugne and me back in Vilnius and one made by Saulius, the father, with EU written on it – a kind of sarcastic joke. Šimtalapis means one hundred layers. It is similar to a strudel with a filling made with poppy seeds and raisins, but instead of one layer of dough, before filling it, we had to layer six very thin layers of dough, each one separated by a brush of butter. This process creates a laminated cake similar to puff pastry, with many flaky layers and a buttery caramel-y flavour. The cake made by Saulius also had an interesting story. All the villagers, the people living within a range of 5 km, are very poor and receive food staples from the government. But what they get is quite different from their traditional and common food. One of the items they had received were breakfast cereals, and because they did not really know what to do with them, they gave some boxes to Saulius, who decided to freestyle a cake – even the EU decoration was made with cereals. We ate everything with pleasure, accompanied by coffee (kava) and tea.

Ugne’s parents are a 56 years old couple that has lived in the forest since the summer of 2016. Today, we made Čeburėkai together, a fried medium-big turnover filled with ground meat, carrots and black pepper. They told me that it is common to find vendors on the shores of Lithuania that sell warm Čeburėkai and beer during summer. It was warming and comforting as fried food can be. A bit heavy, so it was nicely paired with a salad of wild edibles such as garšva (ground elder) sprouts and dandelion flowers.

Their living space lies between two small rivers, where they built a tall tent in which they sleep and a clay house where they keep warm during winter and where we were sleeping. Between the tent and the clay house, there is their vegetable garden, cultivated with a permaculture method, a hut for tools made of wood and straw, and the “kitchen”, a space for the fire, complete with a working table which they renewed during our stay.

8-minutes from their sleeping space is what they call a village (kaimas): five wooden houses that were already present before their arrival. This is also where the dirt road ends. Nearby they have a well for drinking water, but they often take water from a small pond and boil it before drinking.

Aš mokausi kalbeti lietuviškai = I am learning to speak Lithuanian.

Today is Ruta’s birthday. After having breakfast in front of the fire with coffee, tea and Tinginis, in the late morning, we heard the noise of a moped and dogs barking from a different direction than where the neighbours are located. After a while, a man arrived on a scooter and three others in a ramshackle wooden cart pulled by a cream, slightly spotted horse.

Tinginis means lazy cake. It is a chocolate salami commonly made with condensed milk, cacao, sometimes chocolate, and dried cookies, the Gaidelis, nuts and raisins.

The neighbours, the villagers as they call them, came to celebrate Ruta’s birthday. While they chatted, Ugne told me that before the arrival of her parents, no one celebrated their birthdays, but Ruta has started to remember everyone’s birthdays, and now they have become somewhat special days to celebrate together. They brought several gifts: boxes of cheap chocolates, sparkling white wine, a bouquet of wildflowers and some butter in a circular shape with 56 – Ruta’s age – engraved on it, made by the three brothers. They are very simple people, very poor but of great generosity. While we only stayed for a little more than a week, we received fresh eggs and freshly collected warm milk several times.

Isn’t it strange that in Lithuanian, one and two are very similar to milk and bread? Can it be that milk and bread were the two basic foods for the Lithuanian people back in the days when the language started to take shape?

Ruta and Saulius have established a relationship of trust and exchange with their neighbours. Birute is the only woman I met who lives nearby. She lives in a tiny wooden house with her partner, has a couple of cows, a dog that barks all day, chickens and roosters, and a young, never tamed horse running around the house. I have been to see Birute twice with Ruta, this short, stocky woman with a potato nose. The first time she offered us ten eggs and three litres of milk which she milked while we waited, looking at the beautiful swamp nearby. The second time she invited us to taste a plate of freshly made Balandėliai accompanied by boiled potatoes.

Balandėliai means pigeons, but I still do not know if the names come from the shape or from the meat that was used inside the cabbage rolls many years ago. Other than meat, they are filled with rice, seasoned with salt, black pepper and probably some local herbs like thyme. The filling is rolled in cabbage leaves and cooked in a meat broth with onions. It is served with boiled potatoes on the side. It tasted mainly of onion and meat in a warm and light way.

Together with Ruta and Ugne, I visited Vilkaviski, the nearest town, to buy some things to take to Vilnius. We went to get flaxseed oil in a small place where they extract it daily with a cold process. Flaxseed oil oxidizes very quickly, which is why it is sold in 750 ml plastic bottles and stored in the freezer or refrigerator at home. We bought about forty bottles as well as bags of whole and ground flax seeds for us, friends and relatives. The taste of it is quite strong, and due to the high presence of omega-3 fatty acids, it tastes almost fishy. It took me some time to get used to it, but since they were using it on everything, I soon ended up looking for it to finish my salads. We got back in the car and moved to a nearby company that produces bread products. There was a small shop in front of the factory where we bought rye bread for Ugne’s grandmother, who was born and lived in this area and loves the taste of this bread. Ugne told me that the comforting taste of this bread came from the apple jam that is commonly added, but the product itself is not of high quality.

We then visited some friends who offered us coffee, tea and freshly homemade spurga, spherical pancakes made with a very common fresh cheese, varske. They are slightly sweet and mild in flavour, while the consistency is soft and spongy. Ugne’s friend Milda showed me her mother’s equipment in the cellar to prepare a traditional cake cooked on the spit: Šakotis.

Šakotis is a cake made of butter, eggs, flour, sugar, and cream, cooked on a rotating spit in an electric spin or over an open fire. When it is done, it seems like a tree with many branches. Indeed, Šaka means branch. It is dry and crunchy and tastes mainly like sugar, eggs and vanilla. It is a celebration cake made for big feasts on rare occasions. In the last few years, you could also find it at markets and fairs as a demonstration.

The whole experience of living in Lithuania and, especially, with Ugne and Gediminas had such a great impact on my perception of nature, rhythms, food, sustainability and ethics. It was almost easy to be curious and learn from everything and everyone that was around me. Both their lifestyle and the Lithuanian flavours are still brightly present every day in my mind.

She is an enthusiastic student of the Magistrale Programme in Food Innovation and Management at the University of Gastronomic Sciences. As it is hard for her to stay still and she has a strong passion for learning new skills, she started diving deep into basket weaving, food history and culture, as well as foraging and fermentation.