American Pie and the Italian Diaspora 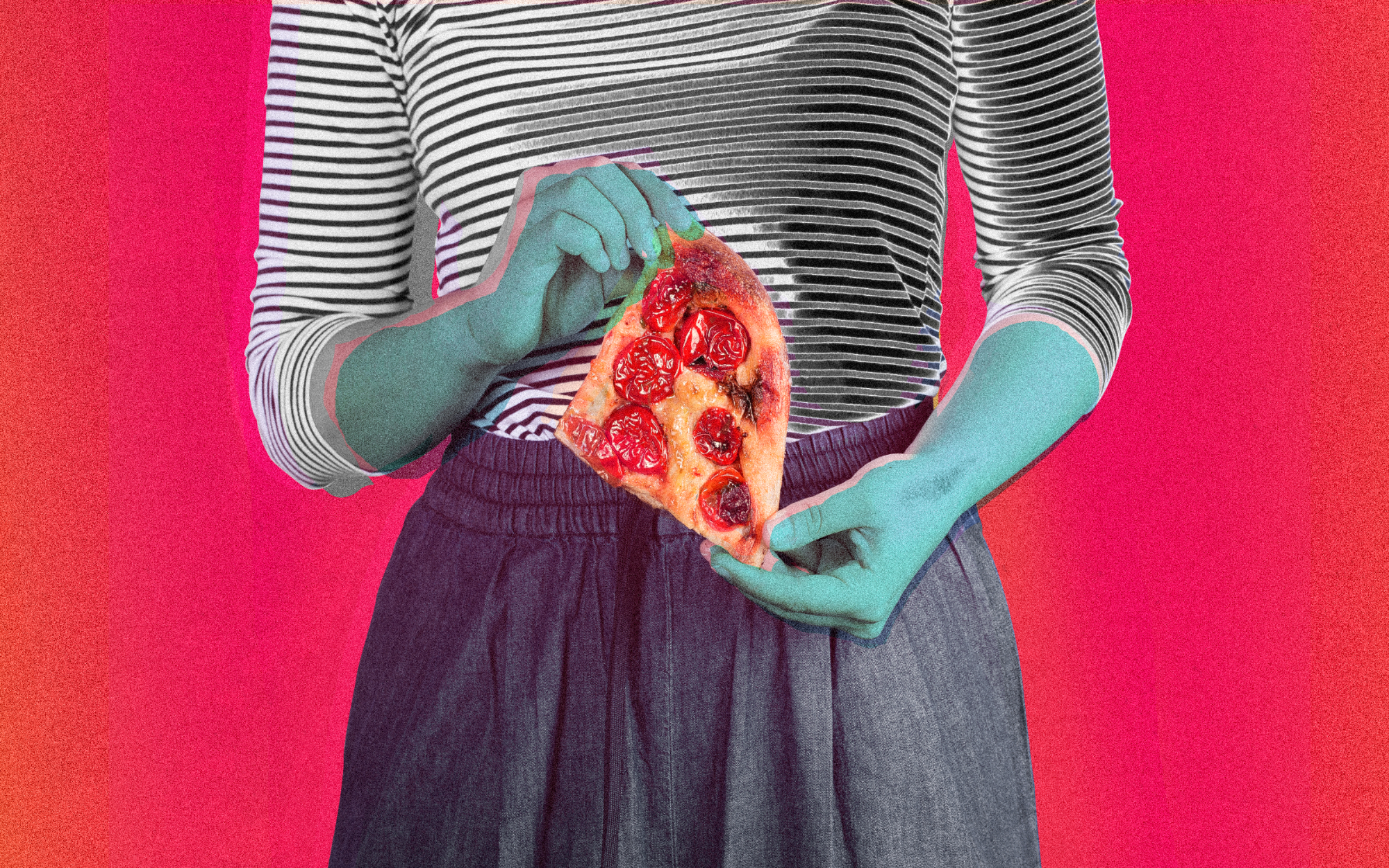 Every self-respecting New Yorker will cross paths with the dollar slice on one unrespectable night or another. The New York slice can be found on almost any block. It’s cheesy and gooey, with an uber-thin yet still crispy crust. And all that for $1?! It’s an absolute steal.

Depending on one’s level of inebriation, the slice may make more contact with the sidewalk than one’s mouth (much to the delight of my Springer Spaniel, whose breakfast often consists of street crusts from the night before). However, the whole dollar slice dance is distinctly different from how pizza exists and is eaten in its birthplace, Naples. In Naples, pizza is a slightly more polished affair – eaten while sitting at a table with a fork and knife. This is a big no-no in NYC unless you want to look like a pretentious prick. In my opinion, pizza should be eaten with your hands – it literally has a built-in handle. 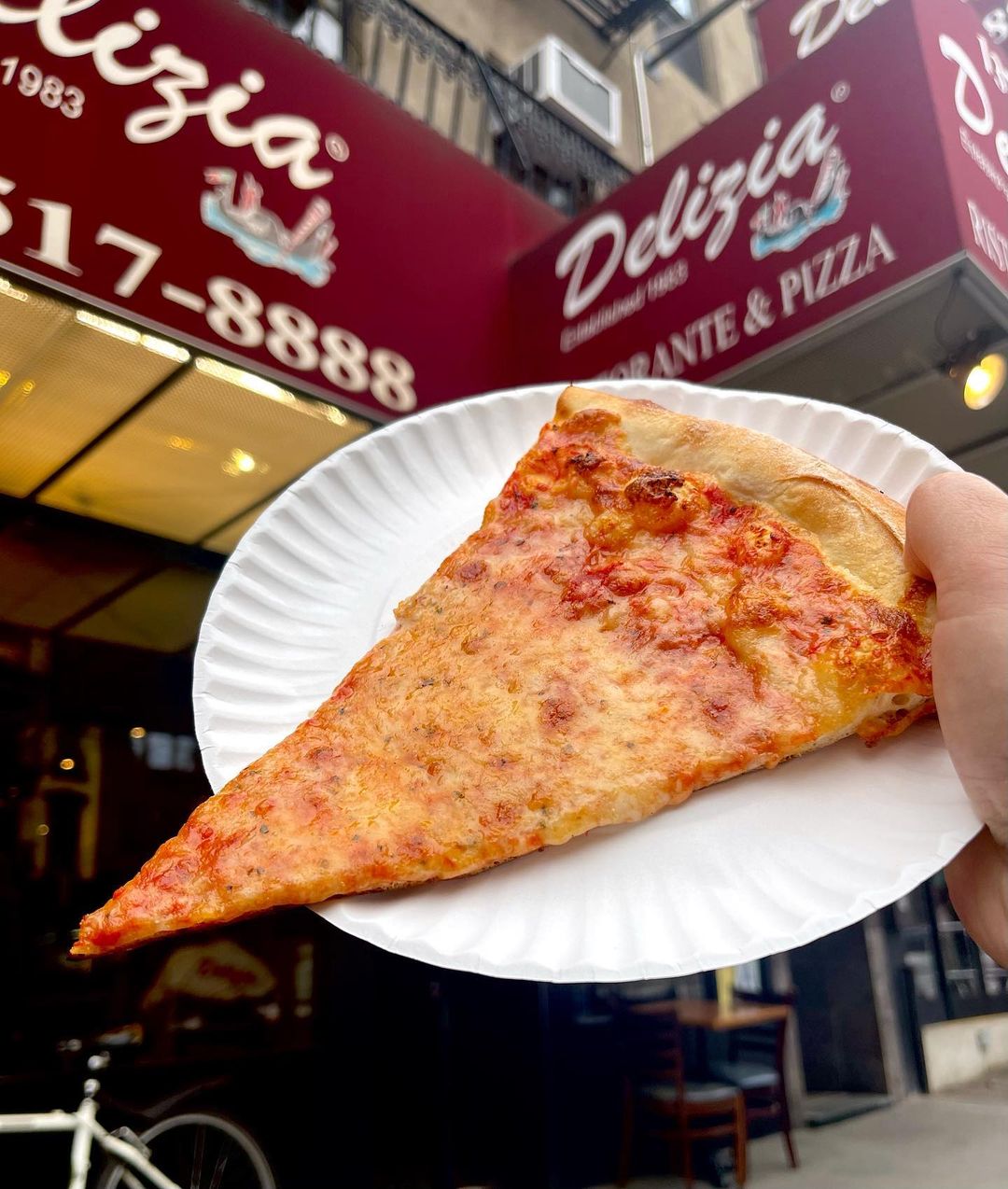 An average New York pie clocks in at a hefty 18-inches (about 46 cm) in diameter. The pie is then cut into exactly eight slices, each wide enough to be folded in half with one hand, the New York style of ingesting a slice. On the other hand, “true” Pizza Napoletana has legally been defined (no joke) in the E.U. since 2009 as “a round product baked in the oven with a variable diameter not exceeding 35 cm [13.78-inches] and a raised rim and the central part is garnished. The central part is 0.4 cm thick, with a tolerance of ± 10%, and the rim is 1-2 cm thick”. The organization behind the regulation, Associazione Verace Pizza Napoletana, claims that the law gives the pizza “maximum dignity…defending its uniqueness and peculiarity”. 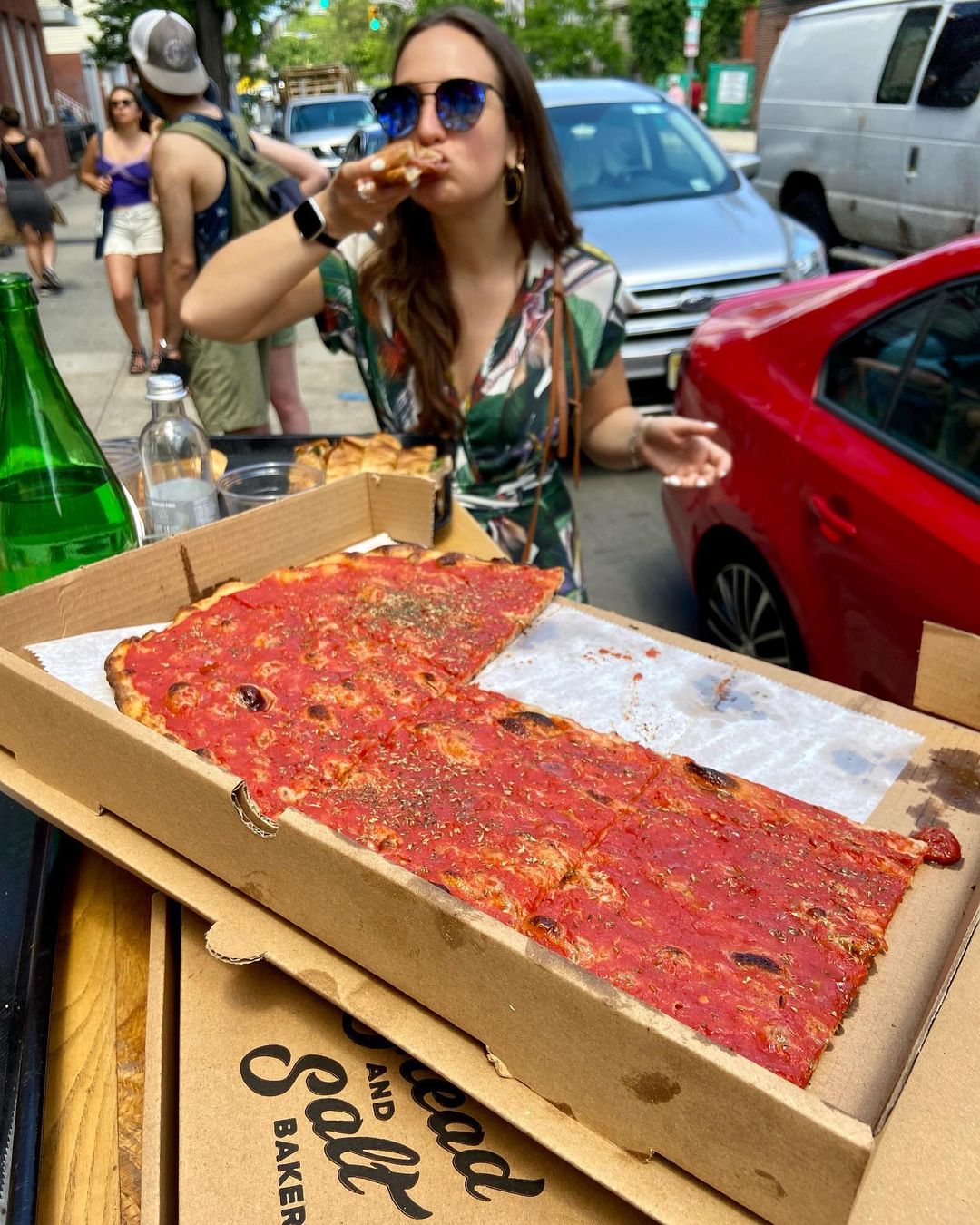 In addition to the mythical NYC tap water, the dough for NYC pizza, which is crisp along the edges, contains sugar and olive oil, unlike Neapolitan pies. The tomato sauce is heavily seasoned with garlic, oregano, basil, and red pepper. On a “regular cheese pizza,” the mozzarella is always grated, never sliced. However, the sauce on an authentic Neapolitan pie (again, it’s the law) must contain only tomatoes and salt and be topped with fresh mozzarella.

“Between 1880 and 1924, more than four million Italians – 10% of the country’s population at the time – fled from rural poverty and hunger to the promise of work in the United States. Today, more people of Italian heritage live outside of Italy than in the country.”

Of course, there are exceptions to all of these “rules,” both in Naples and New York. For example, new York has many joints that serve Neapolitan pies that adhere to the lawful size guidelines. Likewise, pizza portafoglio can be found along the streets of Naples: whole pies are folded up like a wallet (portafoglio), meant to be eaten with one’s hands while standing.

But why are Italian and New York pies so different? Anonymous Reddit users proffer a few answers: “The U.S. is the only country that has to keep making things bigger rather than a sensible size… more with no consideration for taste or even good sense” or, “The only way to make up for the garbage they call pizza is to dump a lot of stuff on it” or, “Italians are smug, snobby, and gatekeepy even when so much of their food culture is stolen.” You would never believe it, but these grand statements about the personalities of whole populations aren’t the answer. Like many other cultural foods and cuisines, pizza styles and practices evolved osmotically through immigration.

Between 1880 and 1924, more than four million Italians – 10% of the country’s population – fled from rural poverty and hunger to the promise of work in the United States. Today, more people of Italian heritage live outside of Italy than in the country. Unlike the 25,000 immigrants pre-1870, who had fled Italy’s political wars, the migrants of the 20th century primarily traveled to the U.S. to improve their economic statuses. In Italy, delayed industrial development and poor agricultural yields led to extreme hunger and poverty for peasants, primarily in southern Italy. As Anthony V. Margavio and Jerome J. Salomone write in Bread and Respect: The Italians of Louisiana, “The search for bread, the yearning for a chance to earn a decent livelihood, and the absence of hope that they [Italian peasants] would ever be able to do so at home was undoubtedly the single most important reason for their emigration to America.” For many, these dreams were realized. In the U.S., Italian immigrants found work in railroad construction and maintenance and the textile industry; later, they provided a workforce for the shipyards and subways. And Italian immigrants were amazed by the newfound purchasing power they were afforded. For example, meat, a once-a-year indulgence in Italy, became part of the everyday diet in the U.S. “In Italy, we were poor, always on the verge of starvation,” one Italian immigrant recounts, “Who could afford to eat spaghetti more than once a week? In America, no one starved”.

Many immigrants settled in ethnic, urban enclaves, providing a literal and figurative taste of how food and the places it was sold were geographically spread framed the boundaries of these Italian neighborhoods. Ethnic groceries and Italian immigrants formed a symbiotic relationship. Food shops provided the products of home and a place in which to assert Italianness. Immigrants, therefore, loyally supported them economically.

Food was a means for immigrants to express their identity; it soon became a way to remake their identity through the prism of America. Some Italian migrants’ foods adapted to the American environment are the most famous “American” delicacies today. Simone Cinotto notes in The Italian American Table, “It has become a truism that ‘Italian’ food habits persist long after language and other cultural features have vanished.” The Italian food habits of the early 20th century migrants have persisted so long that they have become emblems of America itself. The New York slice is one such Italian immigrant-made dish. 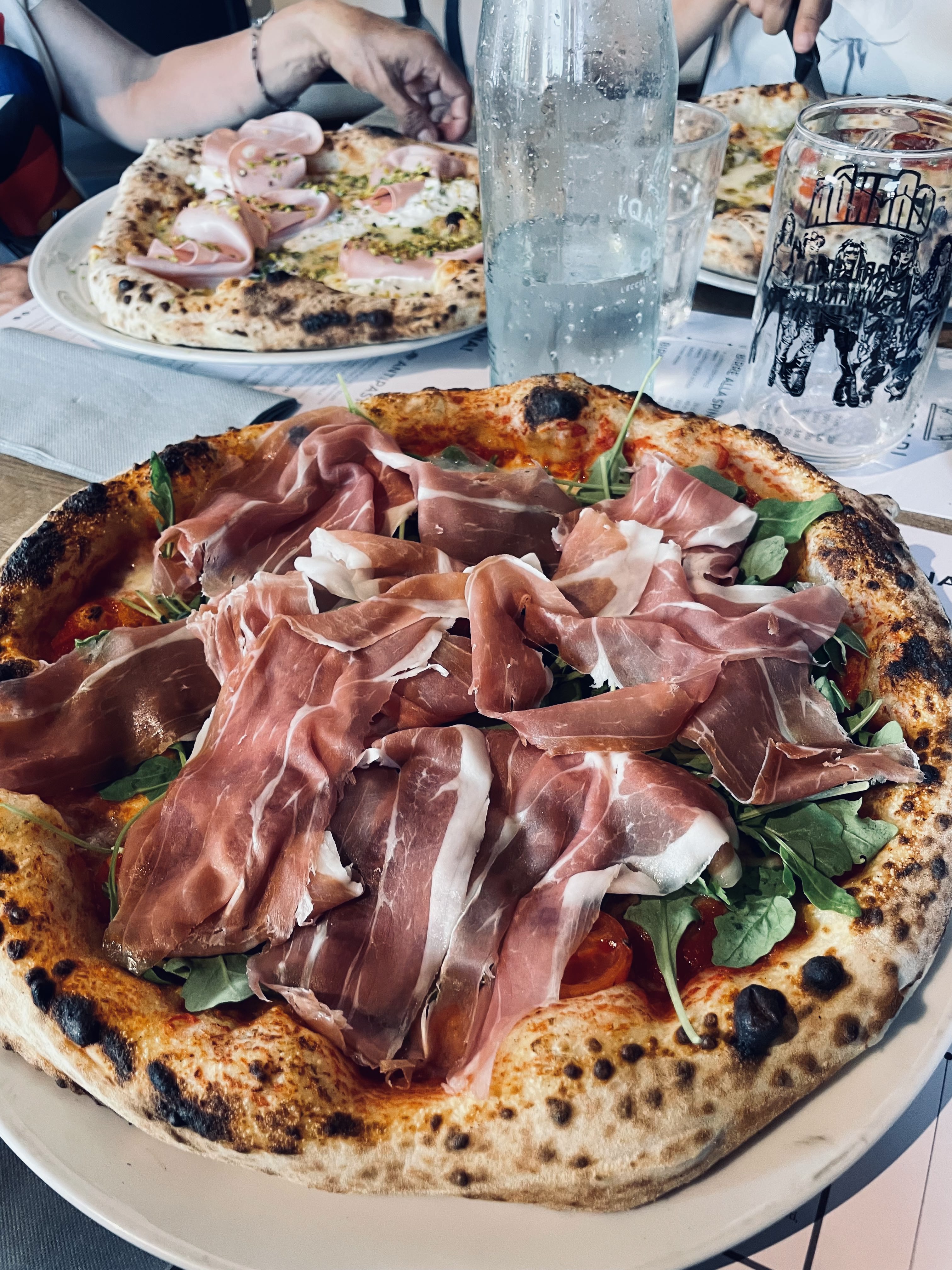 Although one might think the slice is as old as the city itself, the regional specialty is actually quite young, developing in the metropolis around the beginning of the 20th century, thanks to these same Neapolitan immigrants. Flatbreads had been a staple for centuries in Italy, though they were never topped with tomatoes, which made their way to Europe in the 16th century via explorers returning from the New World. This strange, red orb was considered unhealthy, even poisonous, and had to be prepared in very specific ways: cooked once to remove the skin and seeds and then cooked again into the dish or sauce. The Neapolitan poor were, nonetheless, eating a large number of tomatoes by 1863, when two doctors wrote a report on the city, claiming that the proletariat’s poor health stemmed from raw, unripe fruits and vegetables, including tomatoes. The physicians also noted that the poor were subsisting on something called pizza – italicized because the word was not yet known to those outside Naples.

“Flatbreads had been a staple for centuries in Italy, though they were never topped with tomatoes, which made their way to Europe in the 16th century via explorers returning from the New World.”

Around the turn of the 20th century, Italians brought pizza (and themselves) to America. Most immigrants from southern Italy, including Naples, settled in New York’s Lower East Side, where the ground floors of tenements became humble restaurants. In the basements below, Napolitan and Sicilian cook baked pizza and other cheap dishes for the immigrant workers of the neighborhood. However, it wasn’t until the postwar period in America that pizza reached the mass market. Dining in New York, a food guide published in 1930, described pizza as “an inch-thick, potato pancake, sprinkled with parmesan cheese and stewed tomatoes.” In 1947, the New York Times identified pizza as a favorite in Little Italy, supplied a recipe, and wrote, “[pizza] could be as popular a snack as the hamburger, if only the Americans knew more about it.”

Thanks to Italian American entrepreneurs who pinpointed the tastes and fantasies of American soldiers returning from war in Italy, the national pizza market had exploded. By the 1950s, assembly-line factories in New Jersey were churning out pizzas to be sent around the nation. These entrepreneurs brought to pizza the perfect combination of dough, tomato sauce, and cheese – a trifecta that had become popular through spaghetti-based dishes. As a result, pizza has gained its foothold with the help of contemporary modes of production and America’s increasing leisure time and consumption. 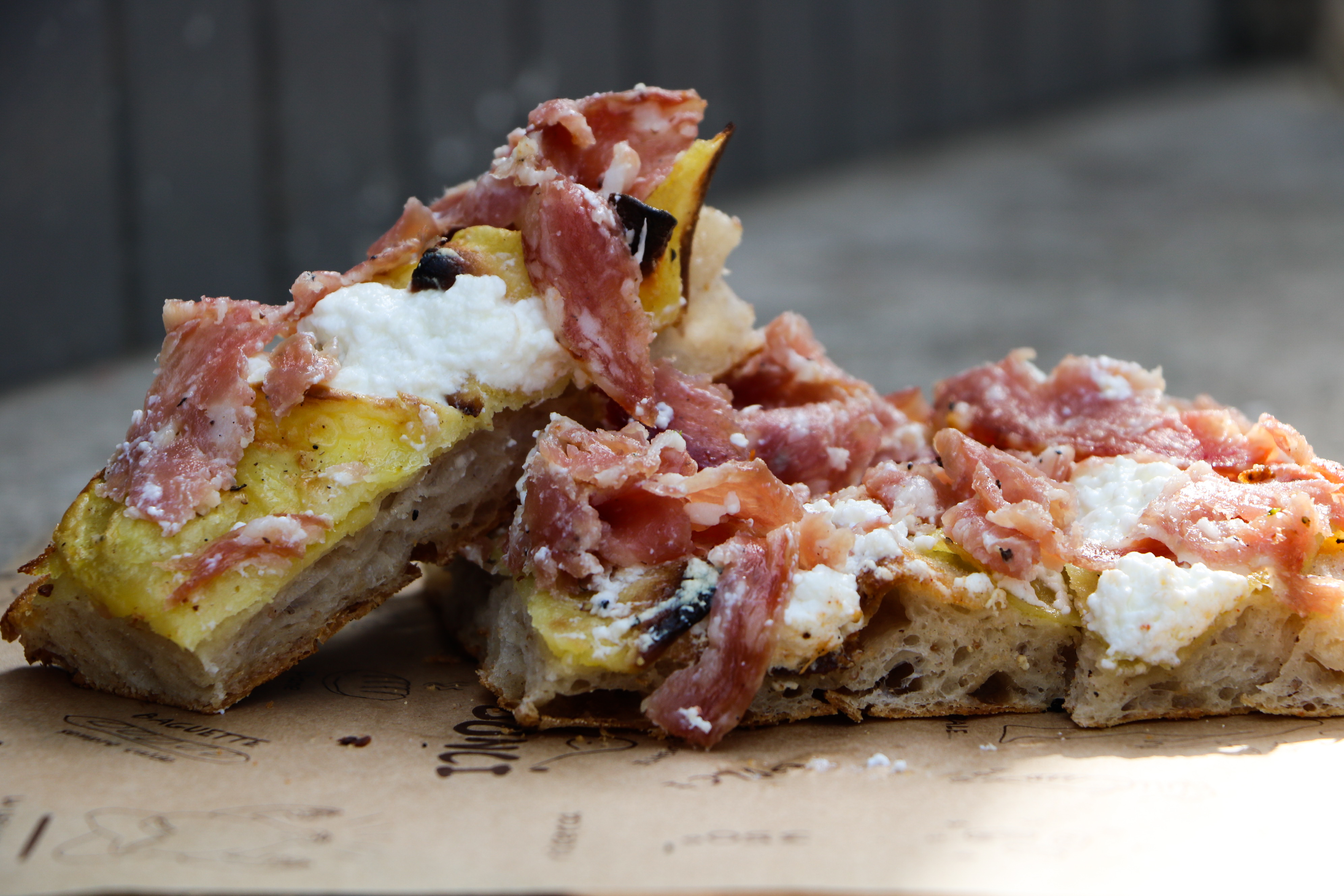 In just a few decades, pizza went from unexplored territory to a dish full of cultural capital, such that every New Yorker, including myself, has strong opinions on the best pie in town. But unlike most Reddit users, my love for New York pizza and Neapolitan pizza are not mutually exclusive. I think there are merits and faults to both styles. I don’t like the grated mozzarella on the New York slice and usually end up ordering the “fresh slice” – dotted with large, juicy rounds of mozzarella instead (which is more than $1). But I also refuse to eat pizza with a fork and knife, which has caused many a stare throughout my pizza tour of Italy. In the spirit of transatlantic comity, I will respectfully withhold my opinion on pizza with pineapple. 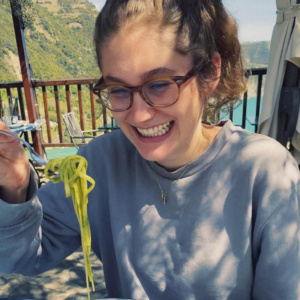 She is currently enrolled in the World Food Cultures & Mobility Master’s at the University of Gastronomic Sciences. To the dismay of her Italian classmates, peanut butter is her favourite food. A born-and-bred New Yorker, she has worked stateside at various small food businesses and magazines, including Saveur and New York Magazine.