A Journey to the Origins of Wine

The journey that brought me to Georgia began when I studied at university. During a Wine History course, I heard that this state had an enological production even older than ours. The fascinating lesson ended with a tasting of two wines from the OUR wine cellar, a 2013 Rkatsiteli and a Saperavi of the same vintage. These are just two of over 500 native varieties that have survived. At first glance, it was not easy to understand these wines: when I came across the Saperavi, I found a wine with a strong flavor and a really cumbersome and sharp tannin, an intense and fragrant smell. It is a wine that has remained in my memory.

My curiosity grew until I finally decided to start discovering this ancient culture. It was there that I really understood what wine was; for Georgia, it was savoring and living the local culture. Immersing myself in their customs and traditions, until I could really understand the deeper meaning that this place had preserved for millennia.

The history of Georgia is complex and crossed by several conquerors who have tried to take away the identity of this nation, failing at every attempt; wine in Georgia is not just a beverage produced for commercial purposes, but, it acquires an anthropological and social meaning that makes it a fundamental pillar of culture. It is exciting to reflect about Georgia as still being one of the countries most linked to the culture and tradition of wine.

Wine distinguishes the identity of Georgia; not surprisingly, in Tbilisi, stands the statue of Mother Georgia (statue built in the socialist period and praising the Mothers of socialism), an imposing monument that carries, in her hands, a sword and a cup of wine: the sword is a warning, but the real intention is to offer wine as a sign of welcome.

One of the darkest periods in Georgian winemaking history was during the Soviet dictatorship, when Georgia had been relegated to the “cellar” of the USSR, but, to keep up with the required quantities, it was not possible to maintain the traditional production techniques characterized mainly by the use of qvevri that were replaced by steel and fermentations in which sugar was added. The result was a sweet and dense wine far from traditional wine.

The memory of the ghvino, however, was not lost, which made it possible to produce traditional wine again, as it had been handed down by older generations. A group of winemakers, whose goal has always been to respect the traditions and their land, have given life to a network that has made space in the panorama of natural wines, with the resilience that distinguishes these people. They have paid attention to the Georgian wines and on their ancestral winemaking techniques. Gathered in the Qvevri wine association, in 2012, they established the first wine bar of natural wines in Tbilisi: it is a place that allows emerging producers to make their products known, sensitizing the palates of the citizens of the capital and of curious tourists, who want to try artisan wines.

“My curiosity grew until I finally decided to start discovering this ancient culture. It was there that I really understood what wine was; for Georgia, it was savoring and living the local culture. Immersing myself in their customs and traditions, until I could really understand the deeper meaning that this place had preserved for millennia.”

On a social level, the role of the winemaker has also changed, transforming away from being just a profession for men; in fact, re-writing some of the most common stereotypes of this sector. Among some of the fastest growing producers, there are, for example, Ketavan Berishvili, a very happy and very capable producer and co-founder of the company Artanuli Gvino / Gogo Wine, which she launched with her father. With the meaning of gogo being girl, Gogo Wine can be called the wine of the girl.

During my stay in Tbilisi, I had the pleasure of taking part at the first edition of the Zero Compromise festival, in which 60 producers, who had the same desire to make their products known, were brought together. It was on that occasion that Mads Kleppe, sommelier of Noma, spoke about how the wines find an expression that is completely new and different from the territory in which they are produced. The terroir is an element of characterization that, thanks to the action of soil, climate and human factors, makes it possible for each grape variety to have a unique expression.

The production of wine is still divided and it splits Georgia into two parts; in the eastern regions, like Kakheti, the whole quantity of marc is used during the maceration, called chacha; in the territories to the west, like the Imereti and Baghdadi – where the climate is more humid – the maceration in the wine production is shorter or absent. The maceration takes place in the traditional clay amphorae, the qvevri. Since 2013, UNESCO has recognized this traditional method of vinification, an intangible heritage of humanity. All over the state, there are only five artisans that are able to produce these monumental amphorae; it takes enormous craftsmanship and considerable physical endurance.

The fundamental element used to obtain a perfect qvevri is the clay, whose origin is crucial for the development of the wine’s aromas, gives it minerality and lowers the pH value. It must be cleaned of any impurities or pebbles to avoid future cracks. The precision and the patience with which the artisan glues the clay sheets, which can take a few weeks, is a very delicate step. Finally, the last secret is the time. The drying process must be slow, to avoid microfractures, and the temperature in the ovens must be constantly between 800°- 950° for four to five days to allow a uniform result. Once the cooking is finished, it is covered by a layer of beeswax so that excessive liquid leakage is avoided, but which still allows micro-oxygenation.

The qvevri are filled up to three quarters to avoid the must coming out during the spontaneous fermentation (thanks to the action of the indigenous yeasts present on the grapes and in the cellar); it lasts from 10 to 25 days, sometimes even up to 40.

“One of the most significant experiences for me was the visit of a monastery that was followed by the visit to the winery. After a few words of explanation, they gave each of us a glass, all different from each other, filled with wine directly taken from the amphorae – thanks for the honor.“

During fermentation, the ovoid shape of the amphorae favors a slow and natural circulation of the must, so that the grape seeds accumulate slowly on the pointed bottom, while the materials circulate. . In this way, the contact surface decreases, and consequently, their influence on the taste of the wine, so as to avoid the extraction of bitter tannins. At the end of fermentation, the chacha hat sinks, settling on the seeds.

Behind the use of qvevri, there is a very interesting philosophical concept for winemakers. It is the beginning of the wine’s life because, exactly as the mother’s womb, the qvevri allows the wine to grow and mature – the maceration with the marc and the micro-oxygenation causes the mother earth to continue to pass on the necessary nutrients. By the arrival of spring, about nine months since the wine was placed in the amphorae, it is considered ready and mature. Wine is the symbol of Georgian strength.

I spent part of my Georgian period in Sighnaghi, in the Kakheti region, to work in the Pheasant’s Tears winery, born from the project of winemaker Gela Patalishvili and painter John Wurdeman. The view from the cellar is wonderful: the Greater Caucasus mountains tower over the expansive vineyards.

Here, I was able to witness the central role of hospitality in Georgia; often, the wine was taken directly from the qvevri and tasted as a sign of welcome. The one who is hosted immediately feels welcome and included in this atmosphere of conviviality. One of the most significant experiences for me was the visit of a monastery that was followed by the visit to the winery. After a few words of explanation, they gave each of us a glass, all different from each other, filled with wine directly taken from the amphorae – thanks for the honor. Although I was with a group of experts of the field, wine never became an element to be evaluated – we were simply captured by the moment and we got carried away by the more intrinsic meaning that wine takes on in Georgia. The tastings of the wines were punctuated by some toasts for nature, life and beauty; you never drink in Georgia if you do not raise the glass first to toast and it is normally the task of the Tamada or the oldest and wisest person present. The first time you participate in this ritual, you’re completely taken in and it is no coincidence that one of the first words you learn, once you arrive in Georgia, is Gaumarjos, an expression that accompanies the toast every time.

It was indescribably nice to be able to experience this trip that I had wanted to go on so much and for which I had waited so long. From the first moment I set foot in Georgia, I was seduced by the culture. There’s so much tied to a drink and it’s so common for it to be present on everyone’s table. But, it also becomes a means of connection between cultures, love, traditions, and society. The Georgians are proof, that wine can be drunk differently, they perceive it inside the body and enter in complete harmony with this liquid, letting themselves be carried away by the inebriating effect. 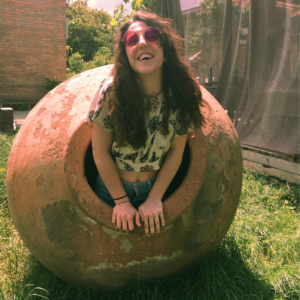 She graduated from the University of Gastronomic Sciences in March of last year and loves to travel so that she can learn about the world through different food cultures. She has started a MSC in Sustainable Food and Beverage Entrepreneurship, in order to be able to bring the value of Italian enogastronomy to a global market in the future.