From the Frontlines of Fermentation

Working with Microbes in a Natural Saké Brewery 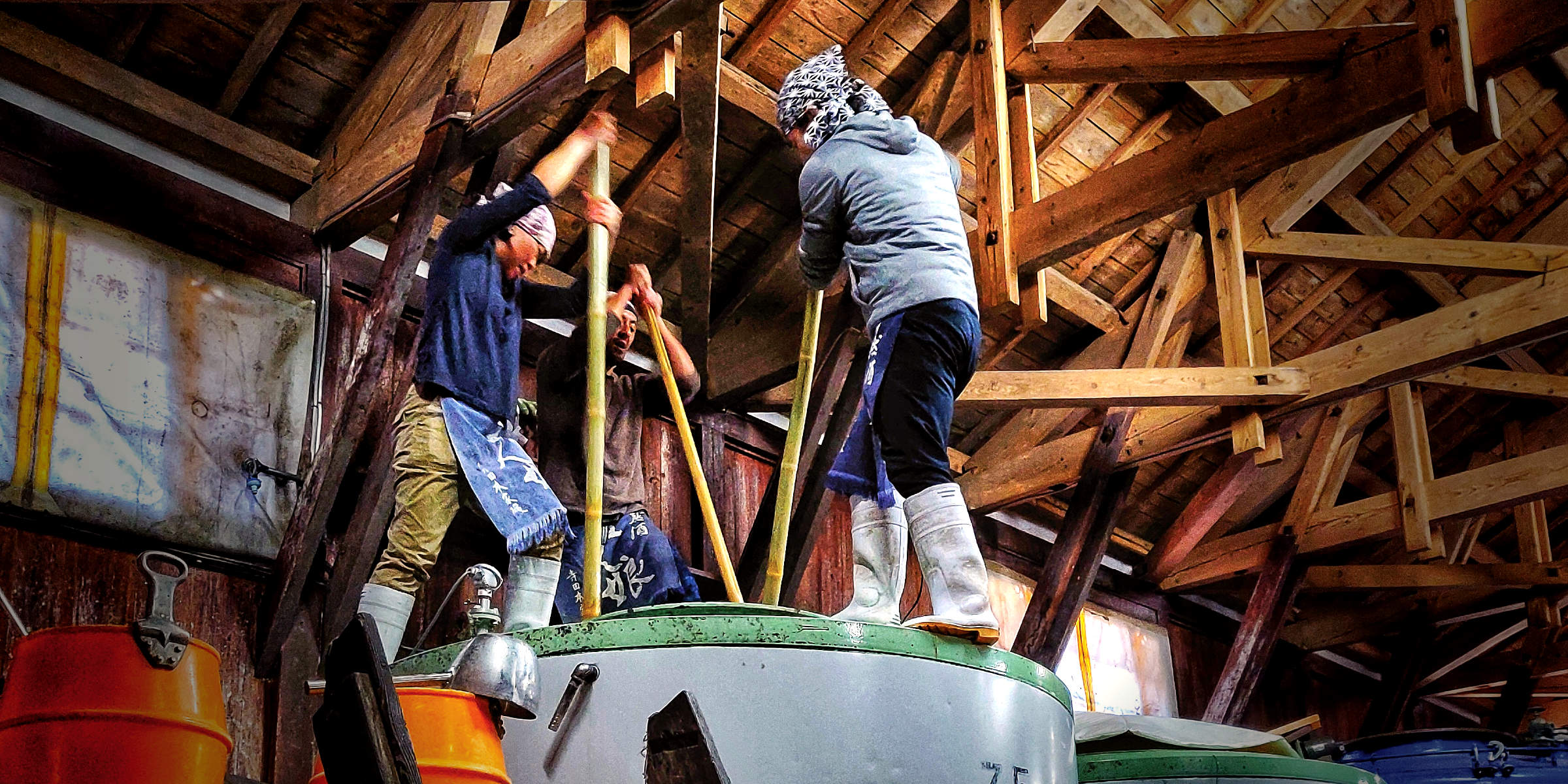 I am in a small, rural town called Kōzaki (population 6,000) off the Chiba peninsula just east of Tokyo. Kōzaki prides itself as the Town of Fermentation, with annual festivals to celebrate all things fermented and the invisible labor that goes into transforming such foods. Here, I work in one of the natural saké breweries called Terada Honké (est. 1673) as part of my dissertation fieldwork. Terada Honké sits in the shadow of a small mountain where there is a Shinto shrine that honors its 400-year history of brewing and fermenting.

If you ascend the Toné [River] to the West,

With thanks to the Kōzaki Shrine,

The water wells up and becomes saké.

Saké is made entirely from rice. Although saké is often called rice ‘wine’ in English, its preparation is similar to that of beer, even when the mashing technique results in a higher alcohol percentage—up to 20% ABV. Its preparation deliberately takes place during the winter because the colder climates ward off opportunistic fungi that thrive in summer’s sweltering heat. At Terada Honké, we take advantage of the outdoor temperatures ranging from 2 to 8 degrees Celsius as the open-air brewhouse functions like a giant refrigerator. The brewhouse itself is made of impressive wooden beams and faded brick, with doorways and vents designed to let breezes in and cool off steamed rice. Generations of wear are etched into the walls with generations of microbes quietly active in its crevices. Each section of the brewhouse is bustling in a splendid cacophony of sounds: steamers roaring, water splashing, brewers singing, forklifts whirring. 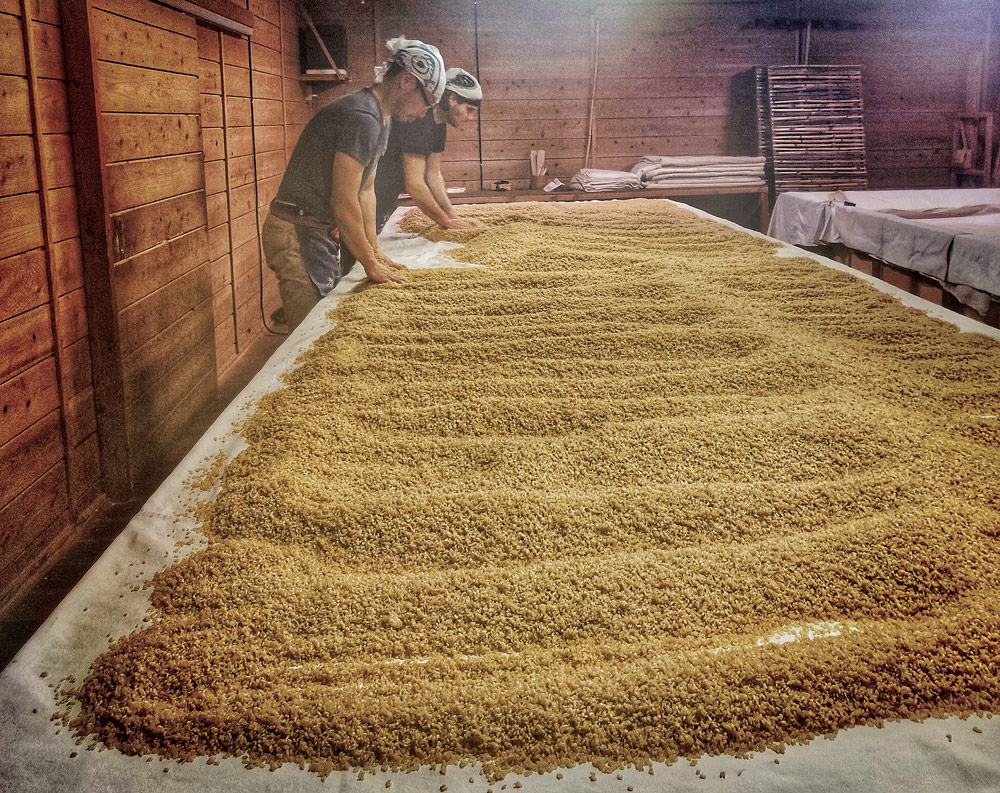 Heat, sweat, and humidity inside the koji-muro for inoculating brown rice koji.   Since koji is a mold, it thrives best in warm, humid, and dark environments.

We cherish this once-in-a-lifetime brewing of natural saké,

At this time, in this place, as was done by the way of the gods.

This morning’s cold does not concern us at all,

It is 6:50 AM and the roosters are getting restless. The workday begins as the sun rises. One by one, the brewers start to enter the brewery grounds with hands in their pockets and their shoulders hunched over. Our uniforms still allow for personality to shine through, mostly in our choice of tenugui head coverings: we all wear rubber boots, we all don aprons with the brewery’s logo, and our color palette stays in the indigo hue. When we walk into the brewery, our breath is white, which later becomes indistinguishable from the steam used to sterilize the tools of the trade. After a quick morning briefing, we scatter amidst the brewhouse like asteroids in orbit: some go to aerate the yeast starters, some load the steaming basket, and some start to wash rice for the next day’s steaming. (Yesterday, we steamed a metric ton of rice.)

“Saké is made entirely from rice. Although saké is often called rice ‘wine’ in English, its preparation is similar to that of beer, even when the mashing technique results in a higher alcohol percentage—up to 20% ABV. Its preparation deliberately takes place during the winter because the colder climates ward off opportunistic fungi that thrive in summer’s sweltering heat.“

We reconvene when the steaming is complete. The cover to the steaming basket is yanked to the side, and bellows of steam waft up into the rafters, out the brewhouse vents. Now, our collective task is to divide the piping-hot rice for one of three trajectories: some rice is set aside to propagate wild yeast starters, some rice is added to the mash, and some rice is destined for koji.

Many Japanese ferments begin with koji, including miso, soy sauce, and saké. Koji (Aspergillus oryzae) is a fungal starter loaded with enzymes (called amylases) that break down the starches in rice. One of the tasks we undertake on a semi-weekly basis is preparing brown rice koji which becomes the starting ingredient for brown rice saké, one of Terada Honké’s speciality.

The koji room (called the koji-muro) is the only space inside the brewery that is both temperature and humidity controlled. It is kept at a balmy 38.5℃, which, in human terms, would be like a mild fever. The room is lined with wood (which doesn’t absorb the heat at all) and there are six windows on the ceiling, each the size of a CD case, that remain closed for the duration of our work. Even before my hands dive into the brown rice in front of me, I can feel droplets of sweat run down my back.

On top of a long wooden table lie 180kg of steamed brown rice, sitting at 41℃, like a hot bath. The initial steps to koji-making are threefold and they seem deceivingly simple: cool the rice, add the koji spores, then mix to cool again. But here is the catch: we must cool the rice down to 35℃ in a room that is set to a higher temperature (38.5℃) than our target. And, the room has no airflow. How do we do it then? The rice is mixed by hand so that it cools uniformly. (Many breweries use fans, but fans also mix dust into the rice which compromises the final flavor.) By interacting with the air, the rice cools down in an environment that is significantly warmer than itself, creating ideal conditions for the koji-spores to develop their enzymes and multiply.

“The initial steps to koji-making are threefold and they seem deceivingly simple: cool the rice, add the koji spores, then mix to cool again. But here is the catch: we must cool the rice down to 35℃ in a room that is set to a higher temperature (38.5℃) than our target. And, the room has no airflow.“

We rake the brown rice by hand, back and forth as if rowing an invisible oar. Heads down, we rake and rake until two temperature probes read 35℃. Then the rice is inoculated, and we continue mixing until the temperature reaches 32℃. We work 90 minutes straight because we don’t want to risk the rice temperature heating back up.

When we finish, exiting the koji-room places me back into the frigid brewhouse open to the outdoor elements. Steam rises from our skin. But our reprieve is short-lived once our sweat cools to the ambient temperature of winter. One of the brewers comments that my cheekbones look like two little apples. My teeth start to chatter as I fumble for my jacket.

“We are just the helpers.”

Terada Honké follows a unique fermentation logic of “seeing from the perspective of microbes” instead of doing what is convenient for the (human) brewers. Rather than adding commercially available or lab-optimized microbes, the brewers rely on the ambient environment for the temperature, humidity, and the wild yeasts and bacteria that make saké.

Part of this mentality views the brewers as being a supportive role to the microbes that do the actual work of transforming rice into saké.

“We are just the helpers,” said one brewer. “Our job is to help the microbes do their work.”

This logic seeped into my pores when making the brown rice koji, because the conditions in the balmy koji room were not meant for my body to work; instead, the room was set at a feverish temperature so that the microbes could thrive best. Opening the small ceiling windows or using fans to cool down the brown rice may be efficient to the human brewers, but doing so would lower the temperatures too drastically and prevent the microbes from penetrating the rice kernel and making optimal koji. No koji, no enzymes. And, without any enzymes, rice will not ferment into saké.

“Terada Honké follows a unique fermentation logic of “seeing from the perspective of microbes” instead of doing what is convenient for the (human) brewers. Rather than adding commercially available or lab-optimized microbes, the brewers rely on the ambient environment for the temperature, humidity, and the wild yeasts and bacteria that make saké.“

As a natural saké brewery, Terada Honké follows a hands-off approach to let fermentation happen, as opposed to manipulating and forcing each of its steps. It is precisely because of this “letting” that most tasks are completed by hand. Whereas automation carries out a known protocol to completion, a manual approach to fermentation allows the brewers to adjust to the unpredictable microbes, the variable weather, and the inevitable touch of human fallibility. As a result, the final saké product varies in its organoleptic quirks. Within the same recipes, some batches have more pronounced notes of acidity and brightness while others have more umami flavors and deep, pervasive finishes. Even the ABV fluctuates from batch to batch.

Natural brewing celebrates this uniqueness instead of seeing it as a discrepancy. Rather than pursuing a predetermined ‘bullseye’ flavor, the approach to natural saké understands that taste is not fixed. Saké is dynamic, very much alive, and subject to change. This approach to natural brewing focuses less on what saké is (or is not) and instead tries to seek out the deepest flavor potential out of each brew. (It is worth mentioning that many conventional breweries add distilled alcohol, artificial flavorings, or other stabilizers to steer their saké towards a targeted flavor profile.)

In turn, this mentality—of letting fermentation happen—messes with the assumption that consistency equals superiority. Often, this consistency is forced, relying on additives to course-correct if a batch turns during the brewing process. So, making consistency the baseline for ‘good’ or reliable flavor means that a brewing philosophy inadvertently prioritizes the human brewer as well as their control over microbes. In comparison, adapting to the microbes’ perspectives means practicing a kind of deference to forces outside of oneself, forces that are both invisible and immense.

Fermentation is the very stuff of working with — not on — microbial life and the logic of Terada Honké is to create the best environment for human, microbe, and rice to support each other. In my first weeks working at the brewery, I found it slightly shocking that most of the brewers did not (or could not) drink alcohol. I had assumed that the brewers were there, in part, to enjoy the taste of natural saké. In conversations with several brewers, I found that a stronger reason for why many have stayed with Terada Honké was precisely this fermentation philosophy of being in service of others, including other species and other humans. When asked about why he continues working with Terada Honké, one brewer explained that the saké-making process was proxy for practicing how to be a more mindful, selfless human. He calls it “polishing the heart.” Another brewer emphasized that the purpose of Terada Honké was to help people grow. To have fun with one another, to give thanks to the water, to promote local farmers producing organic rice, to practice these forms of support on a daily basis.

“It’s a kind of training, you know? It’s here that I refine who I am.”

We give thanks to the prosperity of this saké brewery.

With happiness, with enjoyment, we prepare this mash. 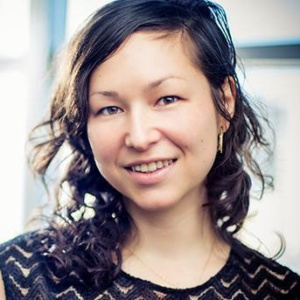 She is an alumni of the University of Gastronomic Sciences and works across disciplines as a researcher, food maker, and educator with backgrounds in the culinary arts, food science, and community building. At the moment Maya is pursuing her doctorate in Communication Studies at Concordia. She studies fermentation and uses feminist theories to better understand discriminating tastes and practices.