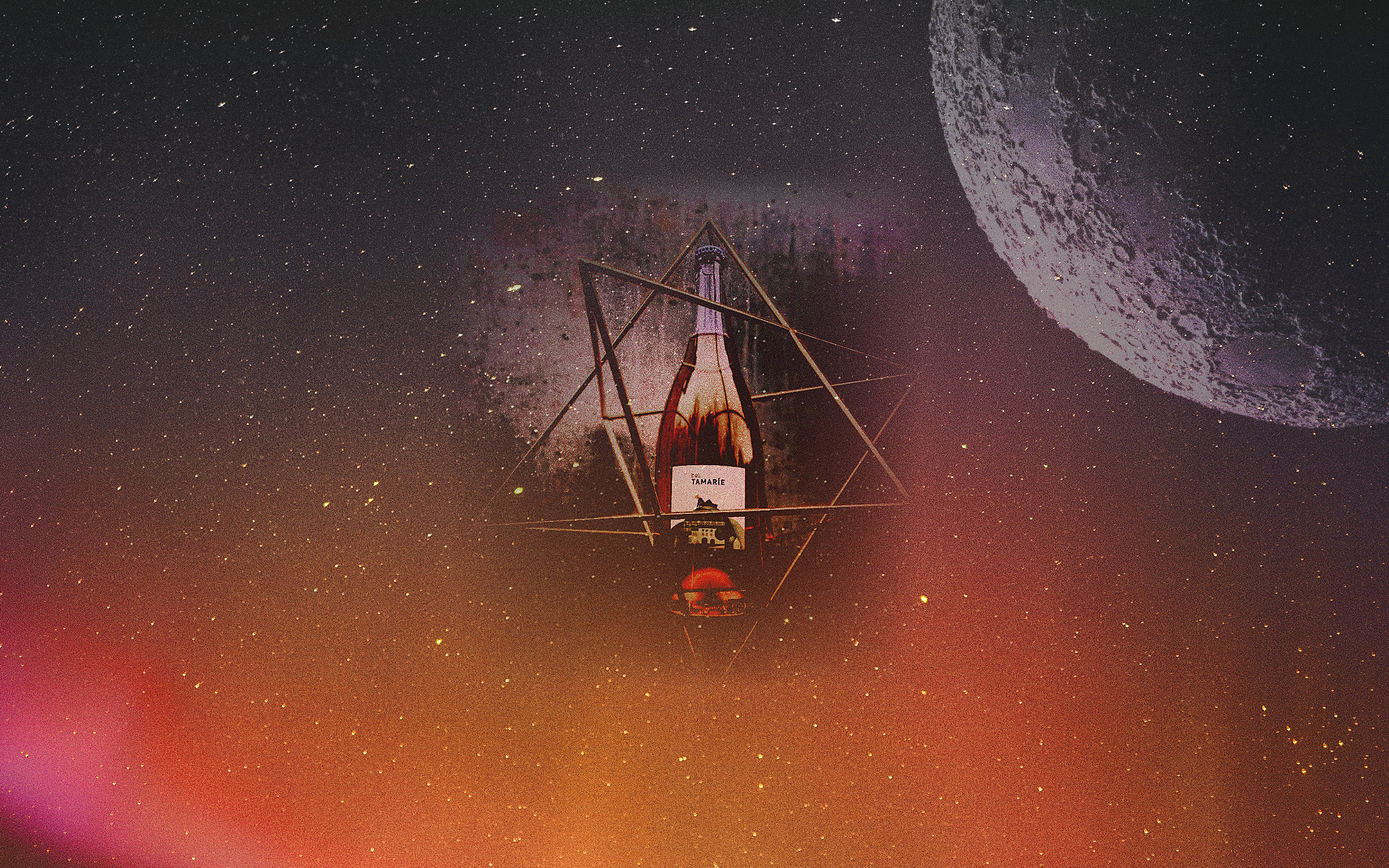 «Natural wine, for me, is wine that doesn’t alter you – instead, it makes you vibrate at your frequency, bringing you closer to yourself». In conversation with winemakers Alberto and Marta of Col Tamarie.

Perched on Tamarie Hill, four hundred and fifty meters above sea level, against the backdrop of San Lorenzo, in the Veneto region of northeast Italy, a vineyard is vibrating at a slightly higher frequency than others. It is doing so, through the amalgamation of cosmic energy and agroecology by replacing pesticides with homoeopathic treatments and fertilizers with life-energy instruments.

Characterized by morainic soil and southeast sun exposure, Alberto and Marta’s vineyard, spread across four hectares, depicts an act of resistance against the prosecco-infested panorama. Vigna San Lorenzo, encased by woods, is brimming with an assortment of native grape varieties punctuated with flowers and companion plants. As I set out to interview the duo, I am accompanied by natural wine enthusiasts and makers, Filippo De Martin and Massimiliano De Bon, on this didactic expedition. Owing to the unexpected downpour, we skip the vineyard tour and make our way to the cantina, manoeuvred by the therapeutic tunes playing in the background. The vibrating sound of mantras and high-frequency music trickles out of the cellar to greet us along with our host. «Our wines are pampered with healing music, even when we are not here, as a way of sound therapy», Alberto establishes from the outset. 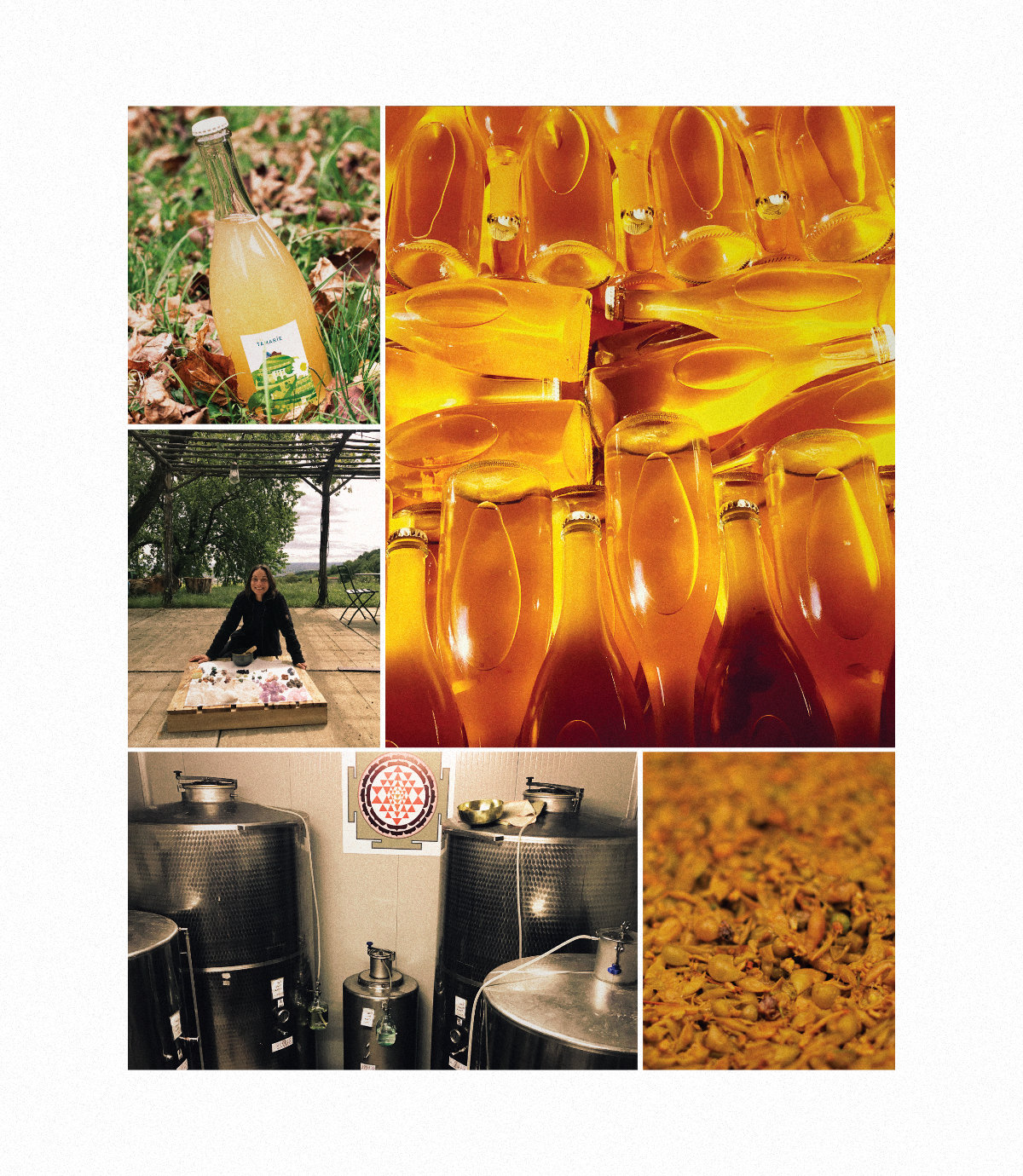 As we begin to make ourselves comfortable in the cellar, Alberto pulls out a chilled bottle from his refrigerator. «A conversation about winemaking cannot happen without drinking the wine», says Marta as she enters the room with her signature scintillating aura and ‘force of
nature’ energy.

Facilitating regeneration of historical varieties, Col Tamarie is a sparkling white wine made strictly using local grape varieties and indigenous yeast strains. It showcases an assortment of grapes: Glera, Boschera, Bianchetta, Grapariol, Verdiso and Marzemina Bianca. «We also add a little bit of Istrian Malvasia and Riesling in the blend as these varieties have been present in this region for generations». A culture of growing diverse grape varieties in the same vineyard to make wine blends prevails in the region, and through his wine, Alberto attempts to bring back the archaic practice. Additionally, honoring the ‘old school prosecco’ method, Col Tamarie is made using the antiquated Col Fondo or surlie method: a refermentation in the bottle.

Col Tamarie takes its name from the hill on which the vineyard breathes. The first seeds were sowed by Alberto Dalle Crode in 2003. The vineyard was initially planted to cultivate hyperlocal grape varieties to sell them as raw material. After years of pruning, weeding, and harvesting grapes organically for other winemakers, Alberto produced his first batch of wine in 2013. «I used to sell my grapes to Costadilà for many years. In 2013, my friend rented my equipment and space for making wine. I made wine there for two years until I met Marta in 2015».

“How did you meet?” I ask while sipping on my second glass of wine, now emitting sour apple and pear notes. The logo interprets Alberto as the ‘Little Prince’ observing the Universe. «Through that same friend. She told him that she didn’t like my wine». Alberto recites the story of their union as he and Marta share a smile across the table. «I tried his wine before I met him and thought it had scope for improvement», confessed Marta.

Viticulture 5.0: Homoeopathy and Geomancy
They met at a moment when Alberto had just started making wine, and Marta was working as a homoeopathic practitioner. Alberto’s vines were suffering from the flavascene dorée, a phytoplasma disease of the vine that can possibly destroy vineyards. He needed a force of nature that could cure and heal his vine. «Do you think homoeopathic medicine can work on vine plants as well»? He ambushed Marta with the question on their second encounter. «But at that time, I only knew how to heal humans».

During that time, there was no literature available on healing plants with homoeopathy. However, Marta’s manifestations came true one day – the universe brought before her an agro-homoeopathist. «She is one of the very few present in the world». Maria Francisca Dindler from Merano in Bolzano, South Tyrol, taught Marta the tricks of the trade. «That is when we started using homoeopathic medicines for the vines. It didn’t solve the problem of flavascence completely, but it allowed us to save the majority of the plants from dying». The couple continues to use homoeopathic remedies for the cure of all plant ailments at Col Tamarie. 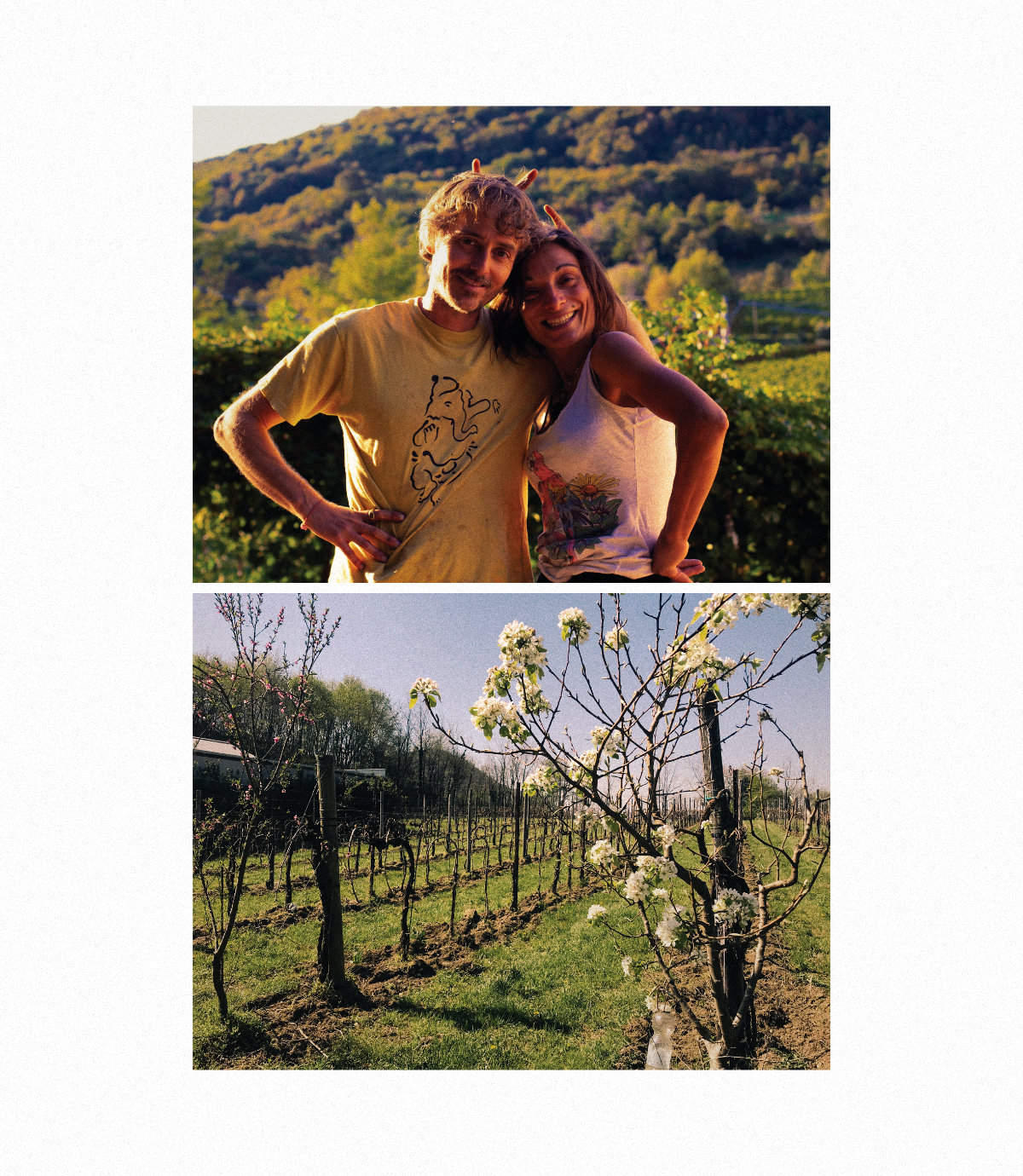 The next step was to fix the malignant vibrations present at the vineyard. Marta invited a ‘dowsing’ professional to determine the medians and other energy points present in the ground. Dowsing is a type of divination employed to locate groundwater, buried metals or ores, gemstones, oil, gravesites, and malign ‘earth vibrations’. «We found spots with low vibrational energy in the vineyard with sick plants. Through lithopuncture, we dug them up and reinstated stones inside. As the energy began to change, the crops went on to grow well again», explains Marta, the homoeopathic doctor-turned-winemaker.

Combining an esoteric approach and sustainable land planning, Geomantic Agriculture incorporates the subtle underlying energies of a place to boost production, enhance the land’s fertility, and maintain environmental harmony. Ancient agriculturists created megalithic monuments with specially positioned stones that focus energies from the earth and celestial bodies, together with those from people’s seasonal rituals. «Considering the century-old land abuse and disease stress in this area, we had to go through this procedure to start afresh». Further, ‘Orgone Canons’, also known as life-energy meters, first created by Wilhelm Reich in the 1950s, are deployed at strategic points across the vineyard and the cellar to cleanse the energy.

Alberto and Marta are partners in winemaking, as well as in life. They live in their home in San Lorenzo along with Marta’s thirteen-year-old son, Enea. Their distinctive set of experiences adds up to something special in terms of quality and also gives their work overtones of spiritualism. They work together in the vines, in the cellar, organizing their harvest, and, last but not least, in raising their three dogs.

“People who drink our wine tell us that they don’t feel inebriated. Our wine instead ushers conviviality but also an introspective journey. It gives lucidity and helps eliminate the mental blocks. It is a wine, always for people, who are on a spiritual journey.”

The winemaker duo does not follow a singular style of agriculture but applies whatever fits the bill. «We tried biodynamic treatments but then moved to homoeopathy as it worked better for us. Biodynamic is for revitalizing the soil and plants, but it is not therapeutic, while homoeopathy is for curing people and plants». Essential oils, algae, and microorganisms are used as fertilizers. «We’d like to use cow manure, but it is hard to find a legit one without antibiotics, and other adulterations», she further adds.

As the conversation goes on, Alberto opens the second bottle while Marta rips open a giant wheel of fresh pecorino, made from the milk of free-grazing sheep in Sardinia, that pairs perfectly well with the wine.

La Vendemmia
The harvest at Col Tamarie begins in the last week of September. Harvested grapes are transported in small boxes directly to the cellar. The bulk of the grapes is destemmed and pressed with at least seven days of skin maceration, while others are fully pressed and fermented. The grapes are spread across different containers, depending on their treatment and variety. «We use an ancient soft press for the non-macerated batch. This press helps to extract the most delicate and elegant flavor notes. While the ones that are pressed after maceration emit more masculine, wild, and intense flavors».

The wines are then fermented for five months in their respective containers. «We mix everything in February. We don’t filter or clarify; we only do the racking». The bottle refermentation is achieved through the use of their frozen grape must. «The bottles remain in the cellar from April to September. During this time, they go through sound treatment and chakra healing, using seven specific gemstones. We bottle on specific days according to astrological charts», Marta says.

Making of an Esoteric Wine
The heady scent of incense permeates the air at the entrance of the cellar. The walls are adorned with sacred geometry images – a tradition common in Buddhist and Hindu belief systems – to channelize energies. Sound therapy is used here as a means to create vibrational energy. «Perché la vibrazione trapassa». The vibrations perforate and connect with the molecules of the wine. «Sound is a vehicle that transports the particular information we want to bring out through the wine. Studies have confirmed that water has memory and retains information. And wine is made of water». From the moment the wine arrives in the cellar until it is labelled, it undergoes sound treatments with specific vibrations – mantras, chants, psalms – whichever is befitting for the moment. «Everything we do in terms of sound is to bring the wine as close as possible to the vibrational energy of Truth. Consciousness is the ultimate Truth. We should all aspire to arrive there. Albert Einstein concluded that everything is energy, and now also quantum physicians are constantly talking about consciousness».

They follow the ‘nothing added, nothing removed’ rule. “So why does the bottle say ‘contains sulfites’ and ‘no added sulfites’”, I inquire, bewildered about the notorious keyword. «Sulfites are naturally occurring substances produced by the yeasts as a way to protect the wine. They are not harmful in small quantities. Our bottles only contain sulfites that are naturally present in the wine as a product of fermentation. They act as an antiseptic for the wine. In Italy, it is mandatory to write ‘contains sulfites’ if the wine exceeds 10g per liter. Different families of yeasts produce different quantities of sulfites, but we don’t add external sulfites», explains Alberto.

So how is Col Tamarie different from other natural wines? «People who drink our wine tell us that they don’t feel inebriated. Our wine instead ushers conviviality but also an introspective journey. It gives lucidity and helps eliminate the mental blocks. It is a wine, always for people, who are on a spiritual journey», says Marta.

Col Tamarie is loved and distributed across the globe. «In 2015, we started participating in wine fairs and festivals in Italy and abroad. This truly helped push our wines. We now present in countries such as Japan, Taiwan, Korea, the USA, and all-around Europe. Even though we didn’t enjoy doing festivals, it was a crucial step in terms of visibility for our wines».

As we conclude our conversation, savoring the last sip in my glass, I feel light and dreamy. The art of thoughtful wine drinking has dawned upon me. I am tipsy, but I am lucid. My head is in the clouds, but my feet are well-grounded on the earth. 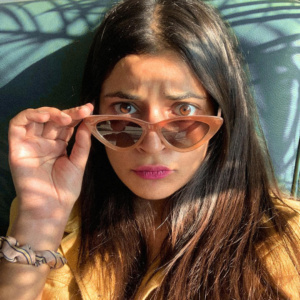 She is a graduate of the Master in Gastronomy from the University of Gastronomic Sciences, currently based out of the Dolomites, where she lives a farm life and writes on deep ecology and slow travel for lifestyle magazines.