India, a vast land of untapped potential, innumerable treasures and historically rich culinary traditions – has truly emerged as a food paradise over the decades. The country’s great expanse & diverse landscape is home to people of various ethnicities, who all speak, think and most importantly – eat differently.

India’s food culture has developed over centuries based on climate and seasonality, but also on, historical traditions, religious beliefs and a socio-political history of invasions and conquests. Owing to these factors, each of India’s 29 states and seven union territories have a distinct culture & food identity, which adds to the country’s larger and rather unique food culture.

One can only imagine the variety of cuisines that emerge from the country. While regions clubbed together (e.g. North East, West, South, etc.) may have similar historical influences, weather patterns and socio-political contexts and hence, similar food habits – each state still has different dishes, flavours, aromas & spices that only belong to and originated in that particular state.

Rajasthan, is one such state in India that’s revered for its diverse food culture. While Rajasthan has not been gifted with fertile lands or much rain, unlike other parts of India, it has still fought and managed to make its barren lands work to create a phenomenal cuisine known world over.

Rajasthan is a land where they say that Marwari, Rajput, Mughlai and even British cuisine is served on the same platter. It is interesting to understand how this barren land gave birth to one of the most colourful cuisines in the world. Rajasthan is divided into nine different regions, namely Marwar, Mewar, Ajmer, Hadoti, Dhundhar, Gorwar, Vagad and Mewat – each of which boasts a unique culture. 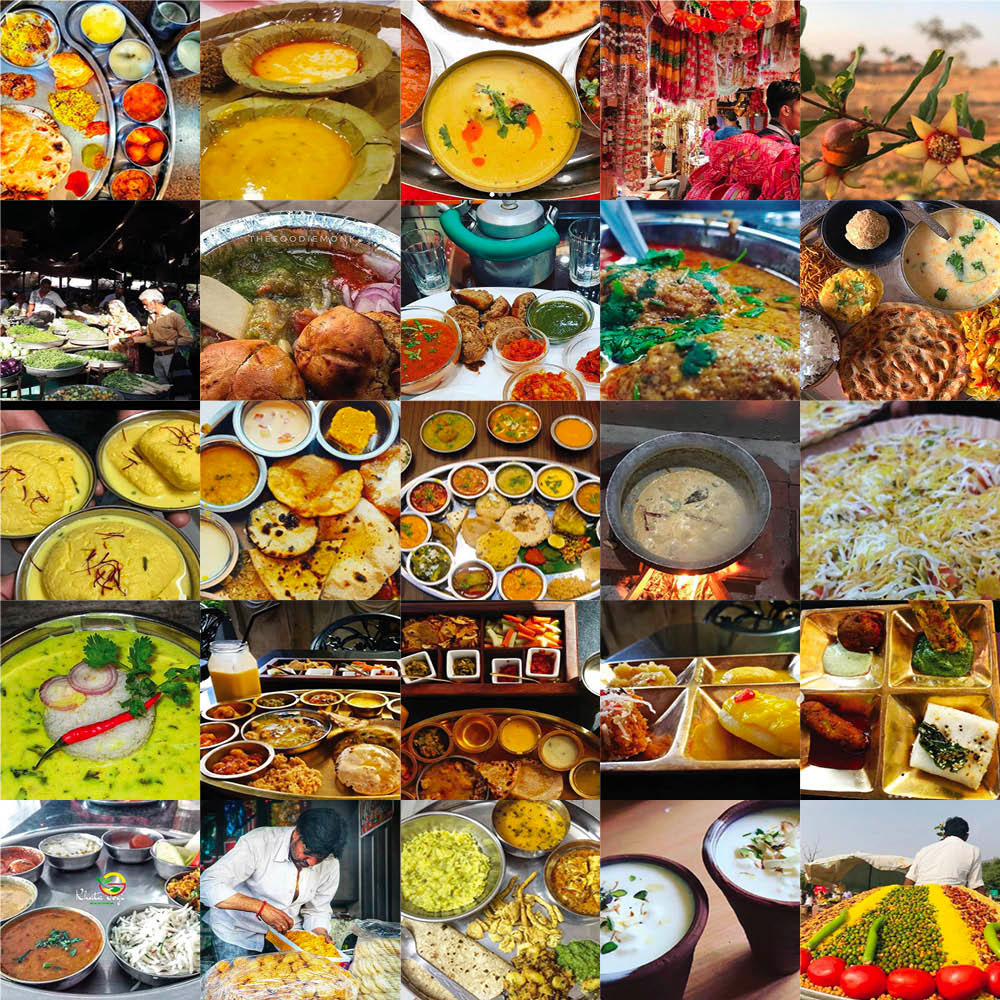 Zooming in on a few of these regions, it’s fascinating to learn how various food traditions came into being. Marwar, also known as the ‘Land of Death’, due to excessive heat and very little rainfall, is home to the Blue city of Jodhpur. The lack of water makes it hard for any crops to grow and thrive in this area. The weather conditions and scorching sun have made life in Rajasthan very tough.

“Rajasthan’s food culture is deep rooted in history, with many more interesting stories to tell.”

Interestingly, the people living in the villages of Marwar survive on a tree known as the ‘Khejri’ tree. This tree is enough to feed one family throughout the drought season in Rajasthan. The leaves of the trees are fed to goats and then the goats are used for milk, cheese and other by-products. This keeps the families going and the tree has slowly come to be known as the ‘King of the Desert’, since it also keeps the soil fertile and intact.

The people of Marwar have learned to adapt and utilize whatever is available to them. For example, branches and twigs that are considered useless to others have become a part of their food. Since green vegetables are now a rarity in the deserts of Rajasthan, they started cooking wild berries that were available around the region to prepare interesting dishes. The berries – Ker, Kumad, Sangli were brought home and cooked along with Khejri and mixed with Mathania Mirch (Chillies that Marwar is known for). This dish came to be known as ‘Panchkuta’ and is one of Marwar’s signature dishes.

Rajasthan inspires in a way that no other state does. The zest for life, food and culture amidst the adversities faced, due to the weather, is heartwarming. Rajasthan’s food culture is deep rooted in history, with many more interesting stories to tell. If one is familiar with Rajasthani food or has travelled far across the world to India to tingle their taste buds with world renowned Indian spices – they have got to be familiar with Rajasthan’s famous “Mathania chillies”. The story of this particular spice is interesting as its origin lies outside the country. 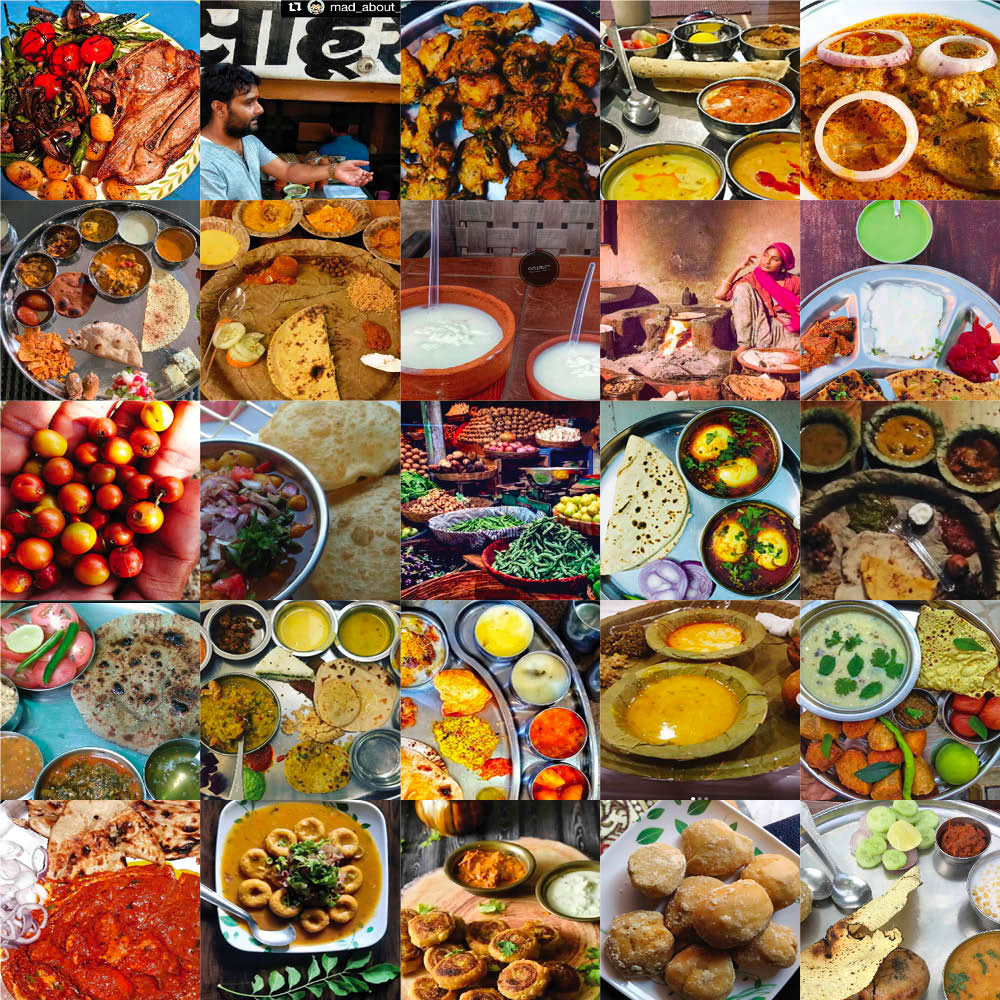 There is a village in Marwar known by the name of ‘Mathania’, where the king of a royal family obtained the seeds of this Mathania chilli from a historical conquest (mirch) and distributed the seeds amongst the farmers who started to grow these chillies in the Marwar region. However, chillies are not indigenous to Rajasthan. Mexico is known to have the earliest record of chillies, which was discovered almost as long as 5,000 years ago. Chillies arrived in India along with the Portuguese in the 16th century.

It is truly fascinating to see how the food culture of the country has evolved with time, picking up various influences along the way!

“One of the influences these dynasties left behind was their food legacies which have carried forward and integrated themselves into India’s food culture today.”

Another specialty of Rajasthan is their Wheat Barley and Pearl Millet (Bajra), which requires a lot of heat and very little water to grow, making Rajasthan the ideal place to house these grains. Pearl Millet too, is not indigenous to Rajasthan. It was discovered in Africa in 2,000 B.C. and took almost 400 years after that to reach India, but once it arrived, it took over every home in Rajasthan. It is said that many kings relied on Bajra for themselves and their army’s energy during battle.

Jodhpur considers Bajra to be rightfully theirs, and it is found everywhere, especially in the form of the famous delicacy – Daal, Baati & Choorma. Baati is a doughball made with wheat flour, ghee and milk, and baked over firewood (coal). It served with dal made of five lentils, known as the Panchmel dal – Thoor, Chana, Moong, Masoor and Urad (these are all different kinds of yellow dal).

Churma, on the other hand, is believed to have been invented when a cook of Mewar’s Guhilot clan accidentally poured sugarcane juice into some baatis. Realising that it had made the baati softer, the women of the clan started dunking the battis in sweet water (made from sugarcane or jaggery) in an attempt to keep the baatis soft and fresh for their husbands. This eventually evolved into churma, a sweetened and cardamom-flavoured mix of crushed baati. 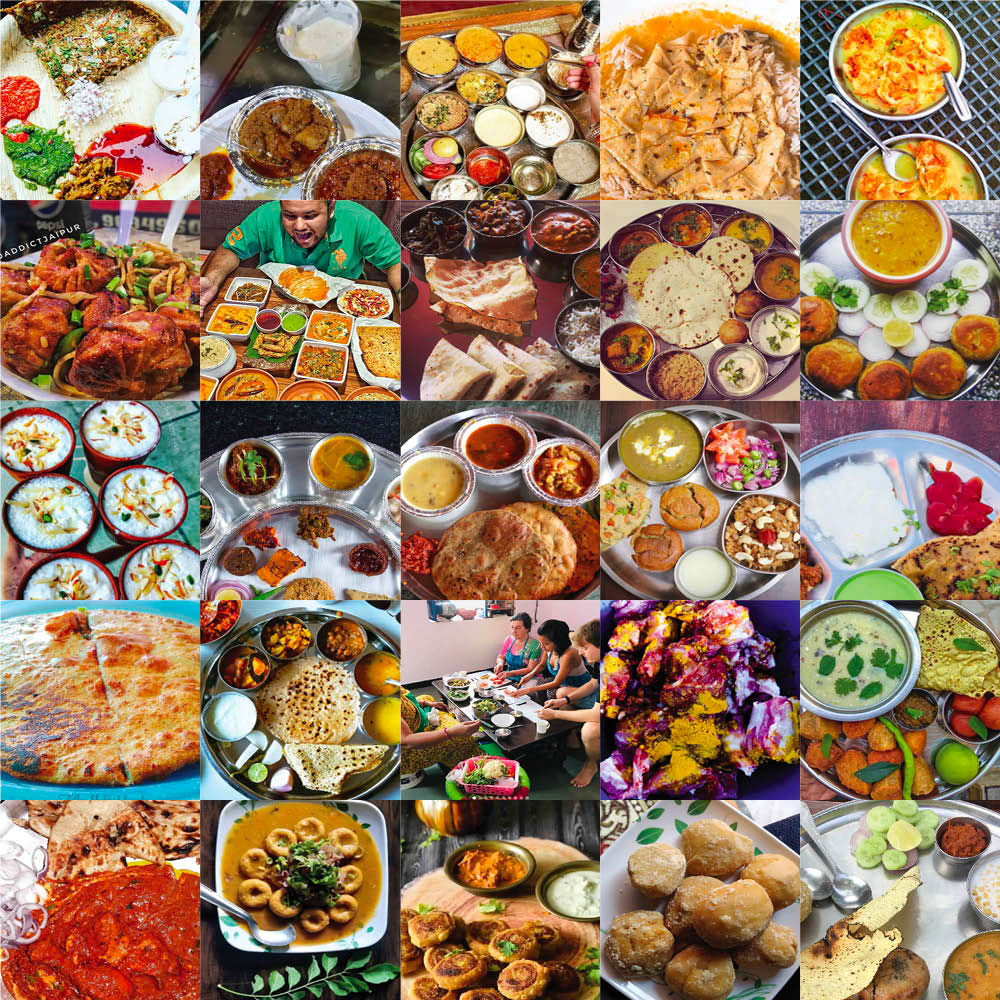 India was reigned over by many dynasties over centuries, many of which had a lasting impact. One of the influences these dynasties left behind was their food legacies which have carried forward and integrated themselves into India’s food culture today. The Mughal Empire was one such powerful dynasty.

When king Akbar of the Mughal Empire married Princess Jodha of Amer, Mughal and Rajput culture were also brought together. This confluence of cultures too led to an impact on the food, architecture and culture of Rajasthan, specifically the area around Jaipur.

Mughlai cuisine was introduced to Jaipur in the form of Biryanis, Chicken Tikka Kebabs and Seekh Kebabs. However, Rajputs still reigned over Rajasthan. While they didn’t consume as much meat as the Mughals, they were still known for their Lal Maas (Spicy Mutton Curry), which they claim as rightfully theirs till today.

“India’s food culture is an amalgamation of various influences that came to India – which were willingly adopted  by the country and also given an identity of its own.”

Rajasthan is not the only such state in India that derives its cultural and food identity with aid from foreign influences, weather patterns & historical traditions. Delhi was the capital and home to various invasions that span over lifetimes and generations. Ranging from Muslim sultans to Farsi traders, Mughals, Turks, Afghans and Englishmen – all have influenced Delhi and left an indelible mark on its culture.

Goa too, was under the Portuguese rule, and in fact most of Goanese food has been derived from that influence. It has of course, now been modified to suit Indian taste buds and to include indigenous produce, which is much the case with all other dishes adapted from foreign influences. One such example that comes to mind is of the dish name Vindaloo – derived from a Portuguese dish named ‘Carne de Vinha d’Alhos’ which literally translates to meat of wine and garlic. The dish was modified using vinegar instead of red wine and the addition of Kashmiri red chillies with spices to evolve to Vindaloo. 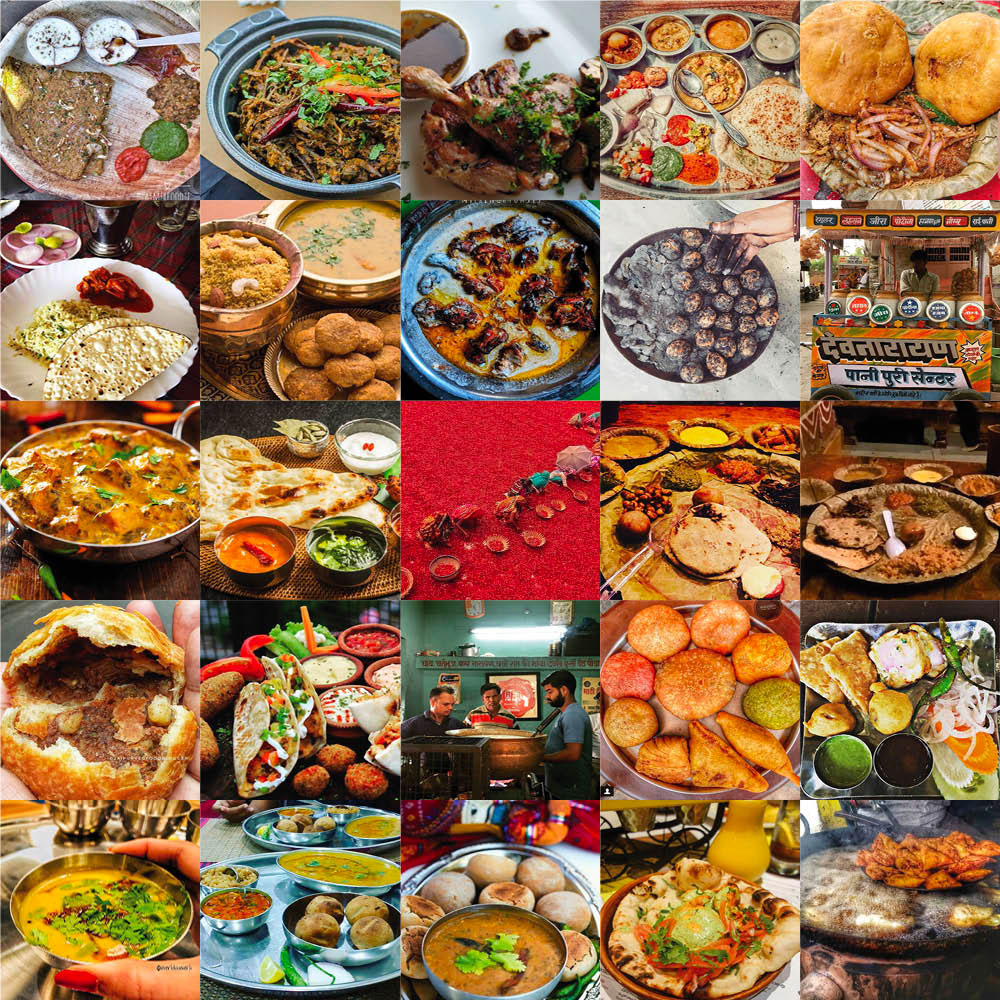 Coming back to Rajasthani cuisine, it is encouraging to see how the state and its people have built utmost resistance to the external environment that could have easily dampened their spirits. For a state that suffers from serious drought and famine, it boasts of a vibrant and colourful food culture that they are extremely passionate and proud of. Their culture reflects a refreshing “never say die spirit”. Gaj Singh, former king of Jodhpur said, “I want to keep culture alive. There is history, language, music. Food can’t be left behind.”

The same, if not more, can be said about India’s food identity and culture as a whole. India’s food culture is an amalgamation of various influences that came to India – which were willingly adopted  by the country and also given an identity of its own. Recipes and dishes that were introduced to Indians were later modified to use Indian spices and techniques, based on the traditional knowledge and wisdom of generations, to give it an Indian touch, a nutritious spin, and a dynamic identity – which is what Indian food stands for.

Open the image sources of this article here! 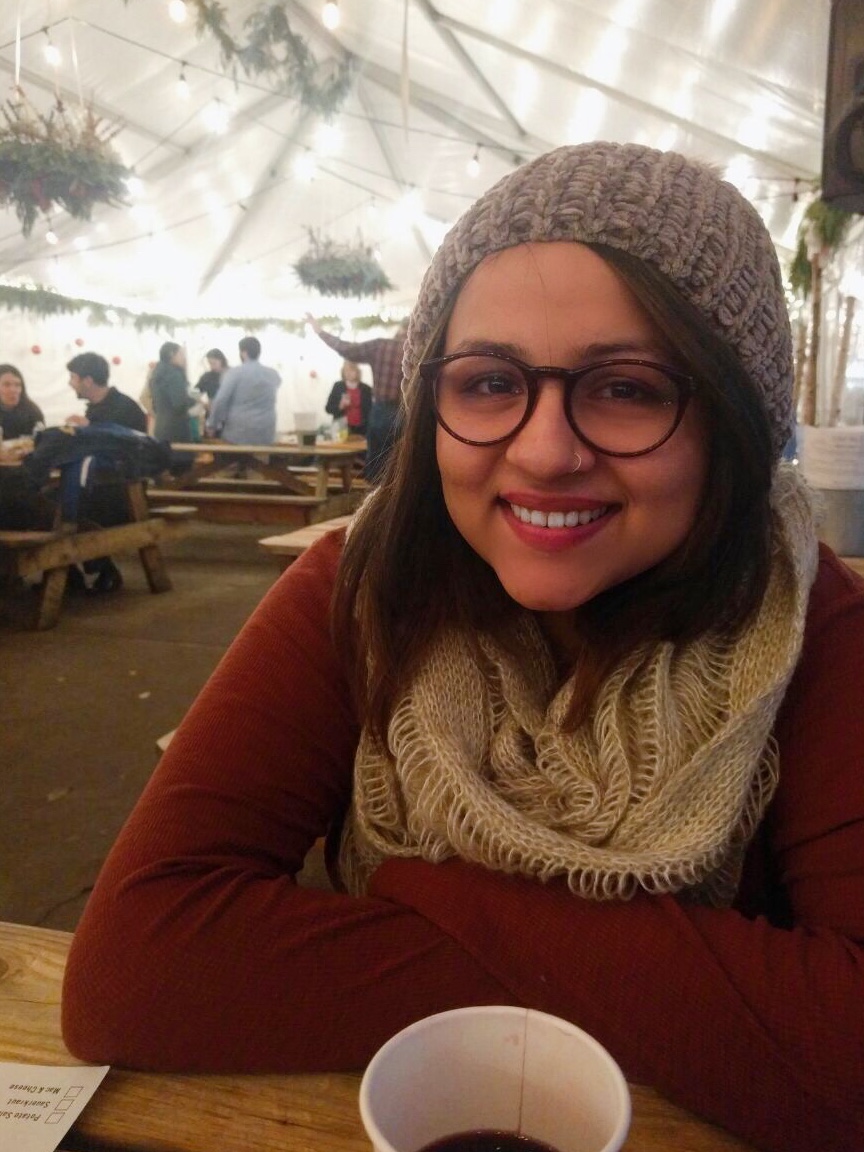 She's a recent graduate of the University of Gastronomic Sciences and a true gastronome at heart. With a passion for understanding the world’s different food cultures, she believes herself to be somewhat of a food & ingredient nerd-with a thirst to learn more about food around the world. Rifka is a lover of wine, Gin, and thinking of innovative ways to bring good, sustainable food to people. 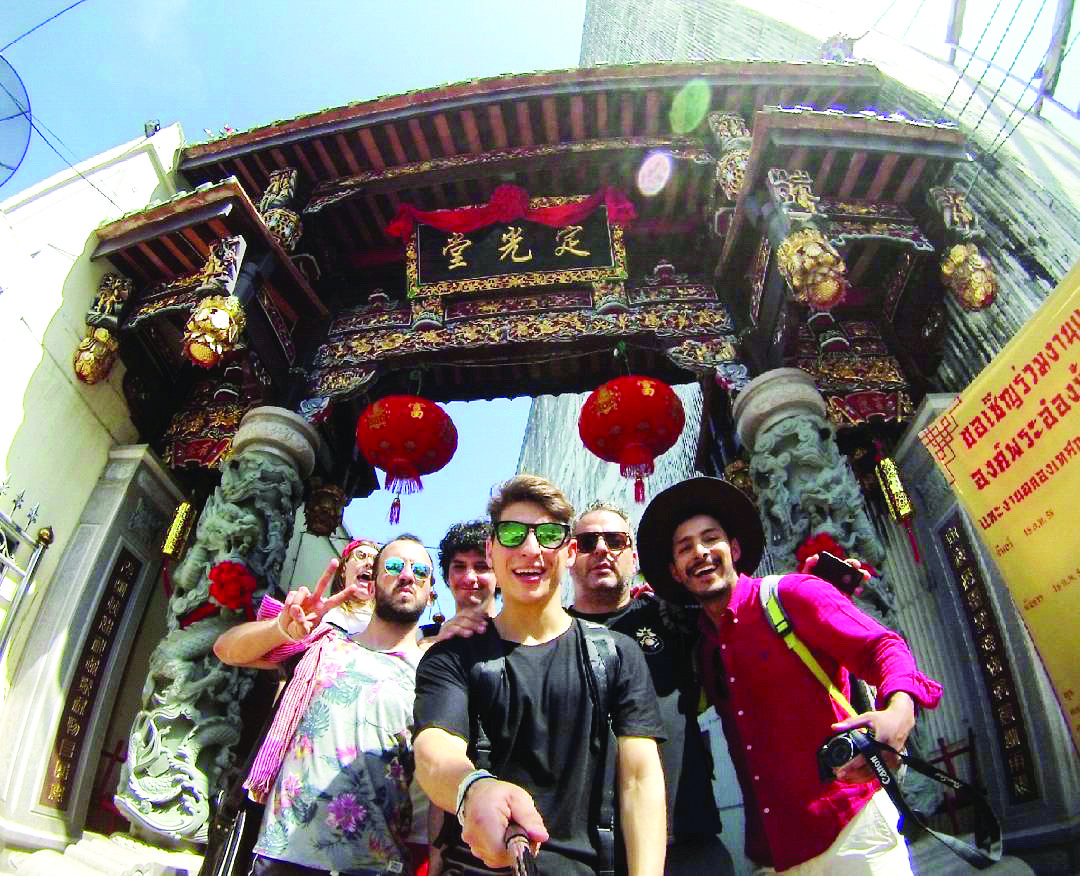 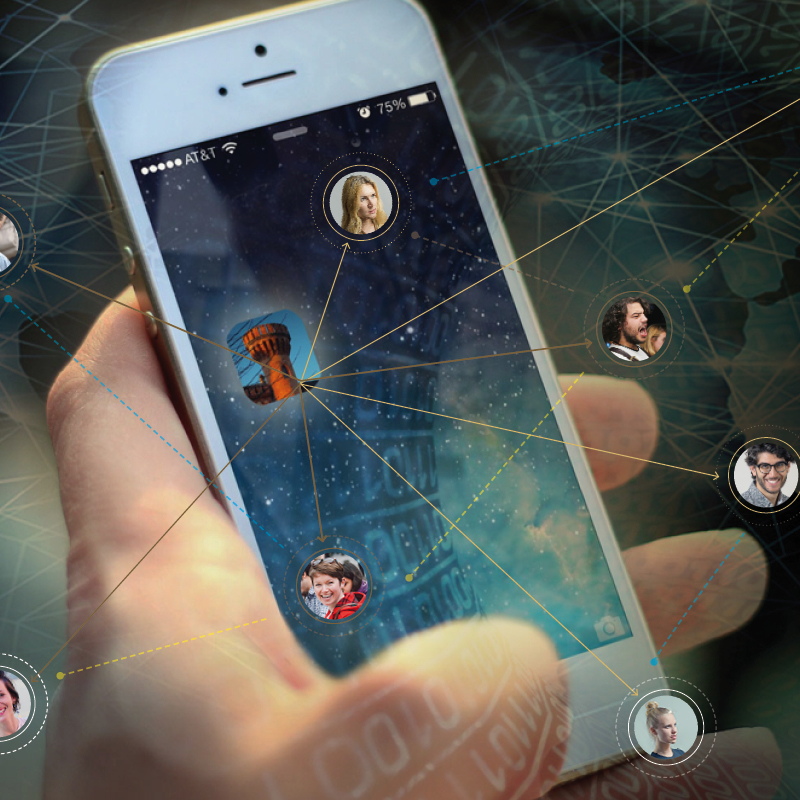