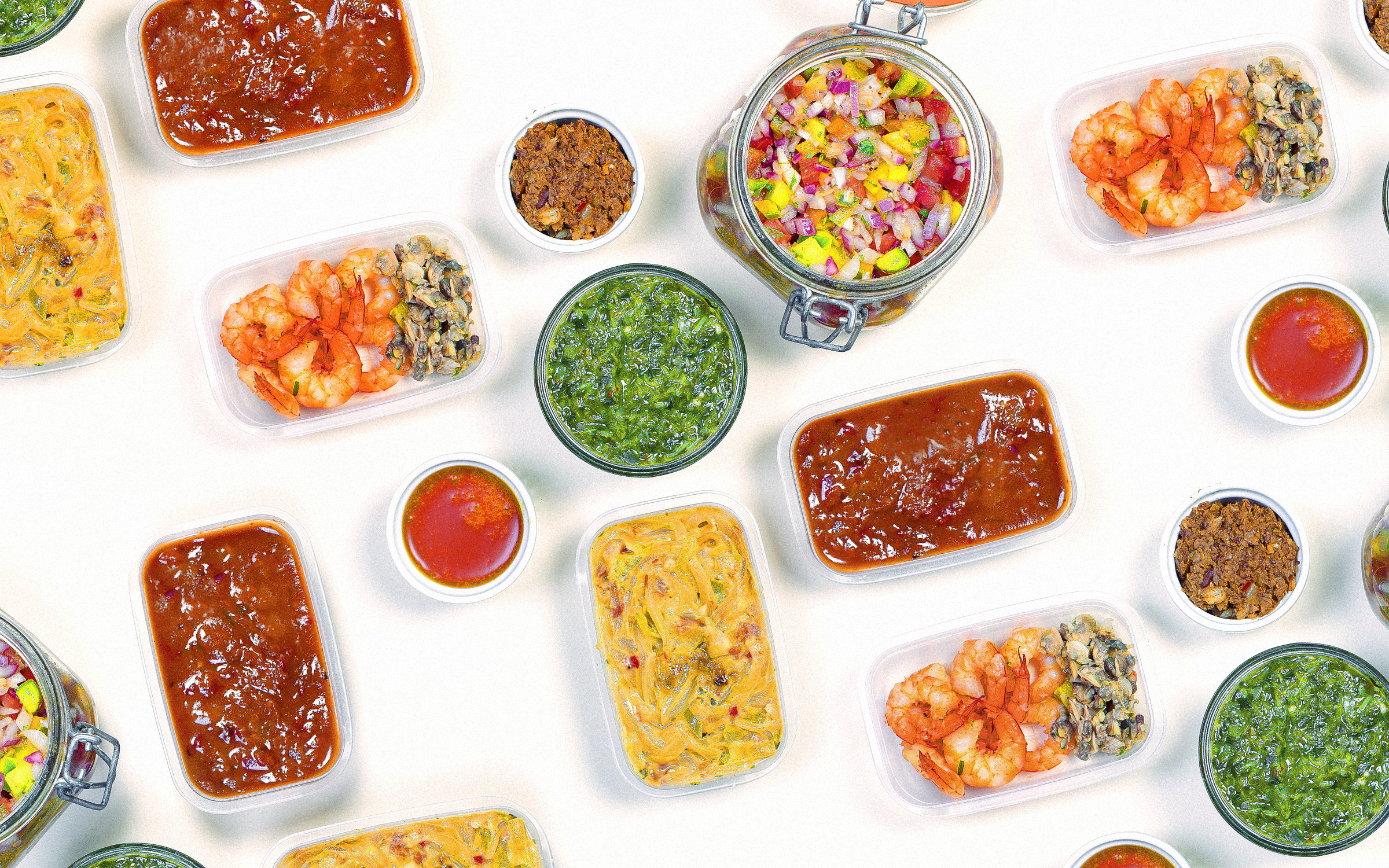 It’s summer in Dakar. The beaches are crowded with people from all walks of life and from all over the world! Dakar is the capital of Senegal, the western-most country of Africa, a place you probably know because of the famous rally Paris-Dakar or because of its well-known and distinctive hip hop and urban culture. Senegal is deemed one of the most peaceful, safe and democratic countries in Africa.

The recipe was originally inspired by a South Senegalese dish, “thièbu joola”, from the Casamance region, where the natives still prepare it with the Oryza glaberrima rice variety and seafood (mostly dried oyster, sea snail and mullet, traditionally fished out of the Casamance river). But the most characteristic aspects of the dish are the okra and roselle (Hibiscus sabdariffa L.) leaves, the tangy and mucilaginous sauce that helps with digestion, as well as the dawadawa paste, made of fermented néré (Parkia biglobosa) seeds, a fermented condiment that smells like gorgonzola!

The “thièbu joola” (Joolas are the main ethnic group of the Casamance) was then adapted in Dakar, twisting the original recipe with elements of the former colonial french cuisine and the availability of white grouper (Epinephelus aeneus) and round sardinella (Sardinella aurita), due to the deep sea fishing tradition. The result is “C’est bon!”, which I sincerely love, as I grew up with “sorties” (picnics at the beach) where we would prepare the dish for lunch after swimming in the Atlantic ocean, surfing on special DIY surfboards or simply at home with family and/or friends! Traditionally, the round sardinella is always grilled and eaten as a snack with a side of lemon/mustard/chilli-marinated raw yellow and green onions. It is sincerely a hit! I am already missing Dakar from writing about it!

One thing I know for sure is that people like to sweat while eating “thièbu joola”. Why? Well, you’ve guessed it! The chilli! Funnily enough, Joolas don’t like chilli that much, in fact, I have never eaten this dish with chilli in the Casamance, except in Ziguinchor, which is the urban centre of the region. Nevertheless, we love it hot and spicy in Dakar – but there is more to the dish: the yassa sauce, for example, with its tangy flavour, its dijon mustard and lemon juice, marinated onions and their wide flavour bouquet due to the caramelization, or the raw onion sauce that balances everything with its fresh tomatoes and bell peppers. Because the white rice is a bit dry, the okra and roselle leave sauce help by giving a hint of sliminess and a good hit of sourness or, as we say in Dakar: “It protects the greedy from embarrassment!”

A good mix of smoky grilled fish and seafood, with a hot and spicy sauce, tangy mustard, sour and sweet flavours, and loads of umami is every gourmet’s dream! Well, at least those with a palate educated in Dakar. 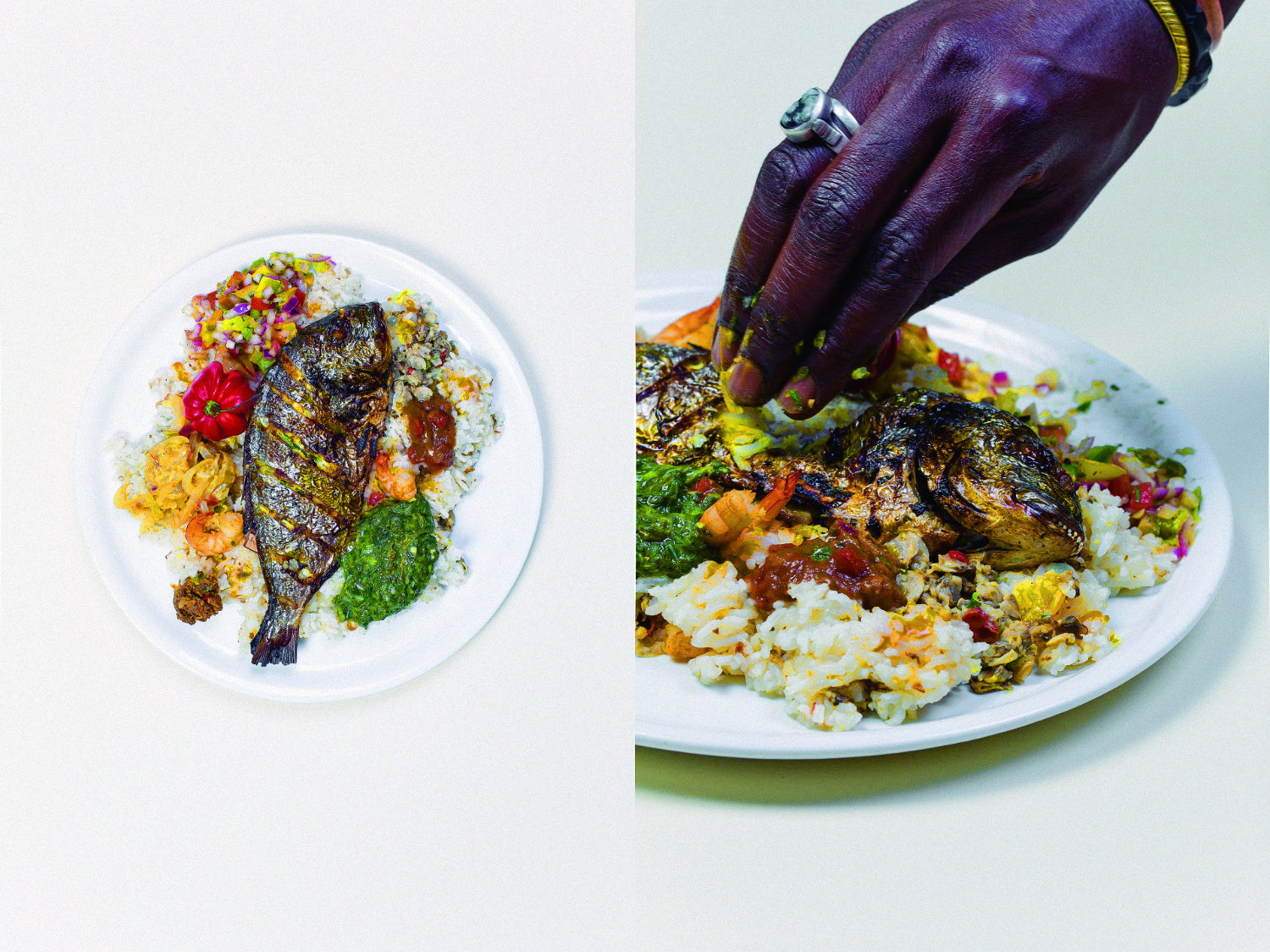 Start off with two Seabreams! The white grouper is now on the IUCN red list, so we will choose Seabreams instead. If you decide to choose a different fish, make sure it comes from the ocean and NOT from aquaculture or muddy river banks (it will ruin the dish!).

For the fish marinade:

¼ scotch bonnet pepper (deseed them if you don’t want it too spicy!)

Mix all with a blender or mortar, add lemon juice and marinate the scored fish overnight or for a minimum of 4 hours.

Mix everything well with a spatula, cover and set aside.

Add salt and vinegar to the sliced onions and mix well. In a mortar crush the bell pepper, garlic, black pepper and the scotch bonnet until everything forms a smooth paste. Add the mixture to the onions, add lemon juice and dijon mustard, mix everything well with a spatula. Cover and set aside alongside the fish for at least 2 hours.

4 okras (you can find them in the ethnic shops)

200g of roselle leaves (you can use turnip tops if you can’t find them, then add lemon juice in the end)

Put everything in boiling water until soft, then, transfer in a mixing bowl, add a dash of the water used to boil, crush and mix well until smooth and foamy but still thick. In case you are using the turnip tops, add the juice of half a lemon in the end and mix well until it foams.

dried oyster (you can use vongole (Venus gallina) sgusciate instead)

In a pot, heat up peanut oil, add shrimp until cooked, then add the dried oyster and stir for 2 minutes; take away the shrimp and dried oyster and add the rice; mix for 1 minute and add water until it covers the rice over 2cm;  cover and put heat to low. Once the rice is cooked, add the crayfish powder, the shrimp and the oyster. Mix well and cover two more minutes.

For the last steps, grill the fish on both sides over firewood or charcoal or, otherwise, put it in the oven. In a pan, heat up peanut oil and add the yassa onion mixture and cook until caramelised. You can add a bit of sugar if you don’t have much time. Assemble and serve with parts of all different sauces, the rice and the fish! Serve with a side of Hibiscus flower and peppermint juice (we call it Bissap). Finally, enjoy! 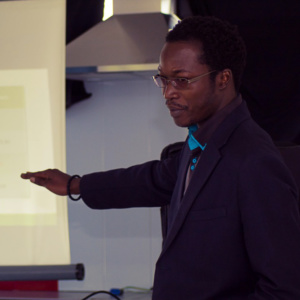 He is the co-founder of Jokko, a Senegalese grassroots organization that promotes permaculture principles and its application through the creation of ecovillages and social businesses since 2011. Currently studying at the University of Gastronomic Sciences, he is passionate about systemic design, natural building and sustainable food systems. He wants to promote the operation of healthy dynamics between urban and rural areas through functional systems, design thinking and regenerative economy.