The Kingdom of Fungi

Or How to Find Comfort in Precarity 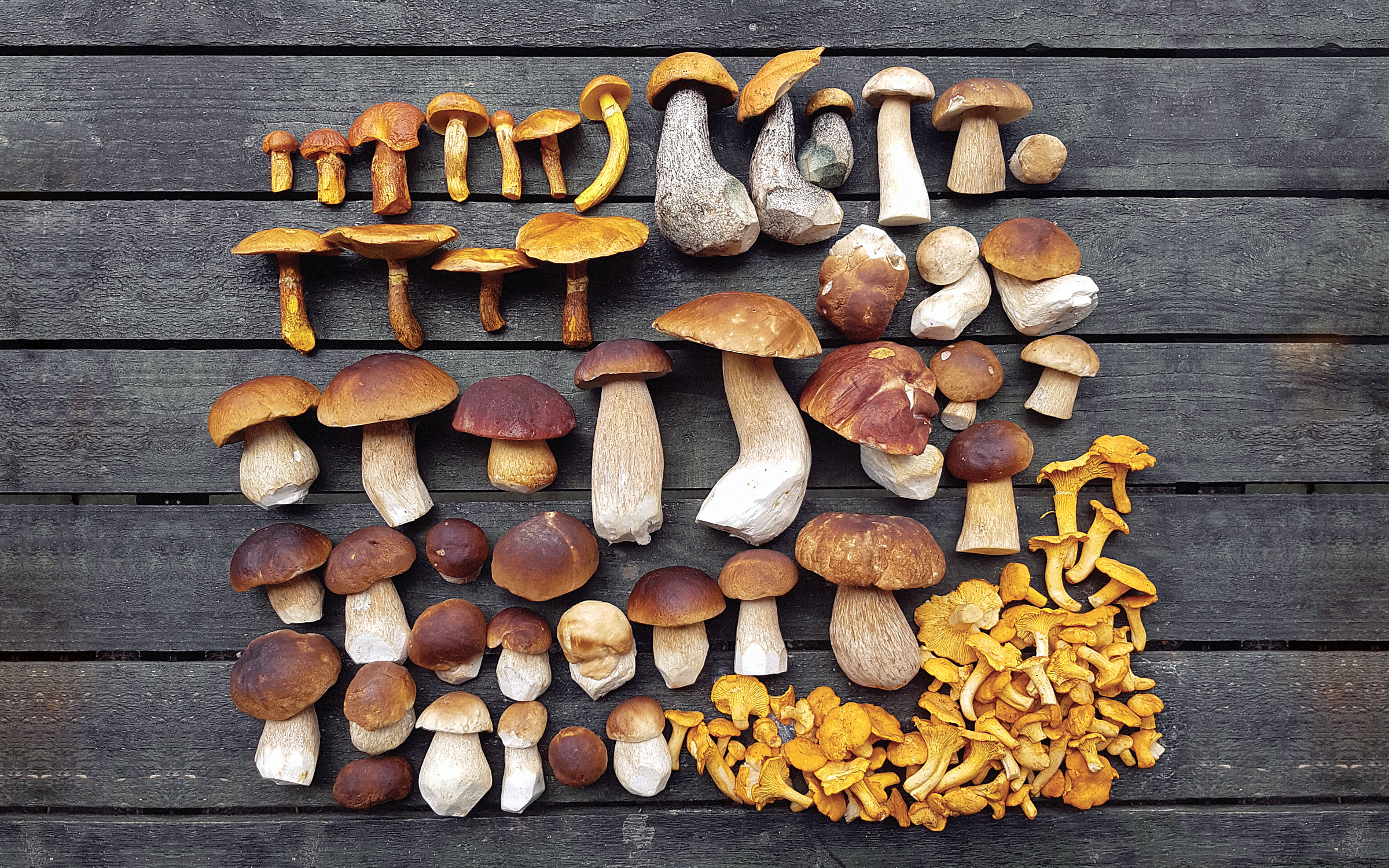 I was walking on clouds. The soft moss beneath my feet sank deeper into the wetlands while I took firm steps toward a bright orange hue. The forest floor was a dark green carpet of gentle haircap moss, dense patches of bilberry shrubs reaching almost knee-high in the sunniest spots, nestled together with feathery reindeer lichen, covering the rocks on the dark, rich soil. A dried-up piece of pine branch cracked under my feet, sharp and loud, and the sound echoed in the silence of the boreal conifer forest. I was vigorously trying to swat off buzzing mosquitoes with my right hand, the left one holding tightly to the empty woven basket while trying not to lose my sense of orientation in the dense forest.

I could already imagine myself getting back to the kitchen, pouring the chanterelles from today’s hunt into the steaming hot frying pan, adding a generous slab of butter and a good pinch of salt, tossing them a few times, while the air would grow thicker with their nutty and spicy aroma. I would eat the surprisingly fleshy yet subtle mushrooms straight from the pan, licking my fingers. 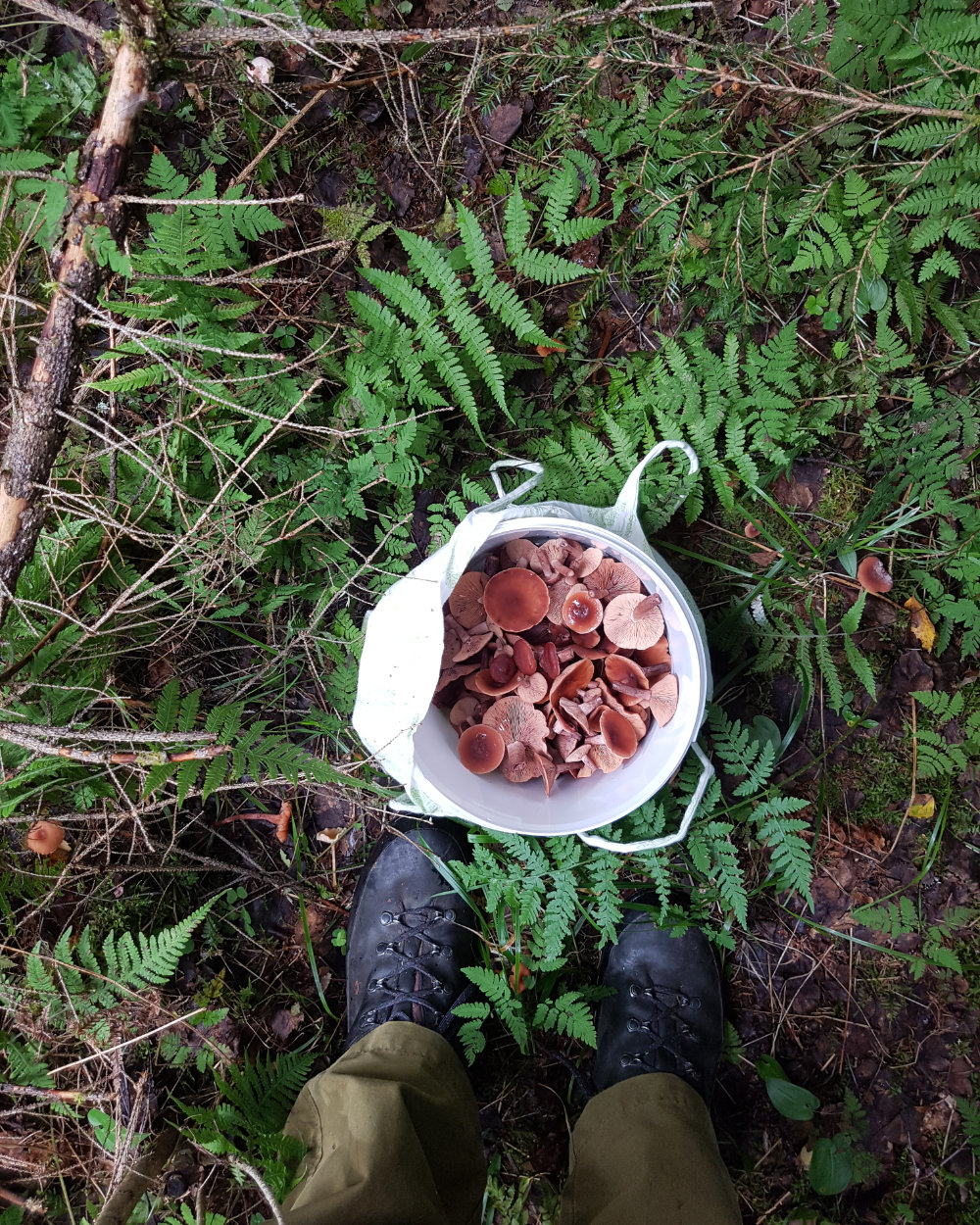 Adrenaline pumping inside me, I bent down to my knees behind the fallen spruce trunk, brushing away the spindly brown needles in hopes of finally seeing the “gold of the forest” I was looking for. My excitement slowly faded as I kept brushing away the needles, just to find more needles and dark soil covered in a layer of yellow, half-rotten leaves. I had mistaken them for golden chanterelles. Scanning the ground around me one more time, I stood up and kept looking.

What do you do when your whole world starts to fall apart?

During the pandemic, the world came to a halt. Taking in a deep breath and holding it for a long time, scared to breath out. I returned to Finland in spring, hoping to be able to go out for walks without explaining myself to police officers or paying a hefty fine. I longed to at least have a connection to nature when physical connection to humans was limited. 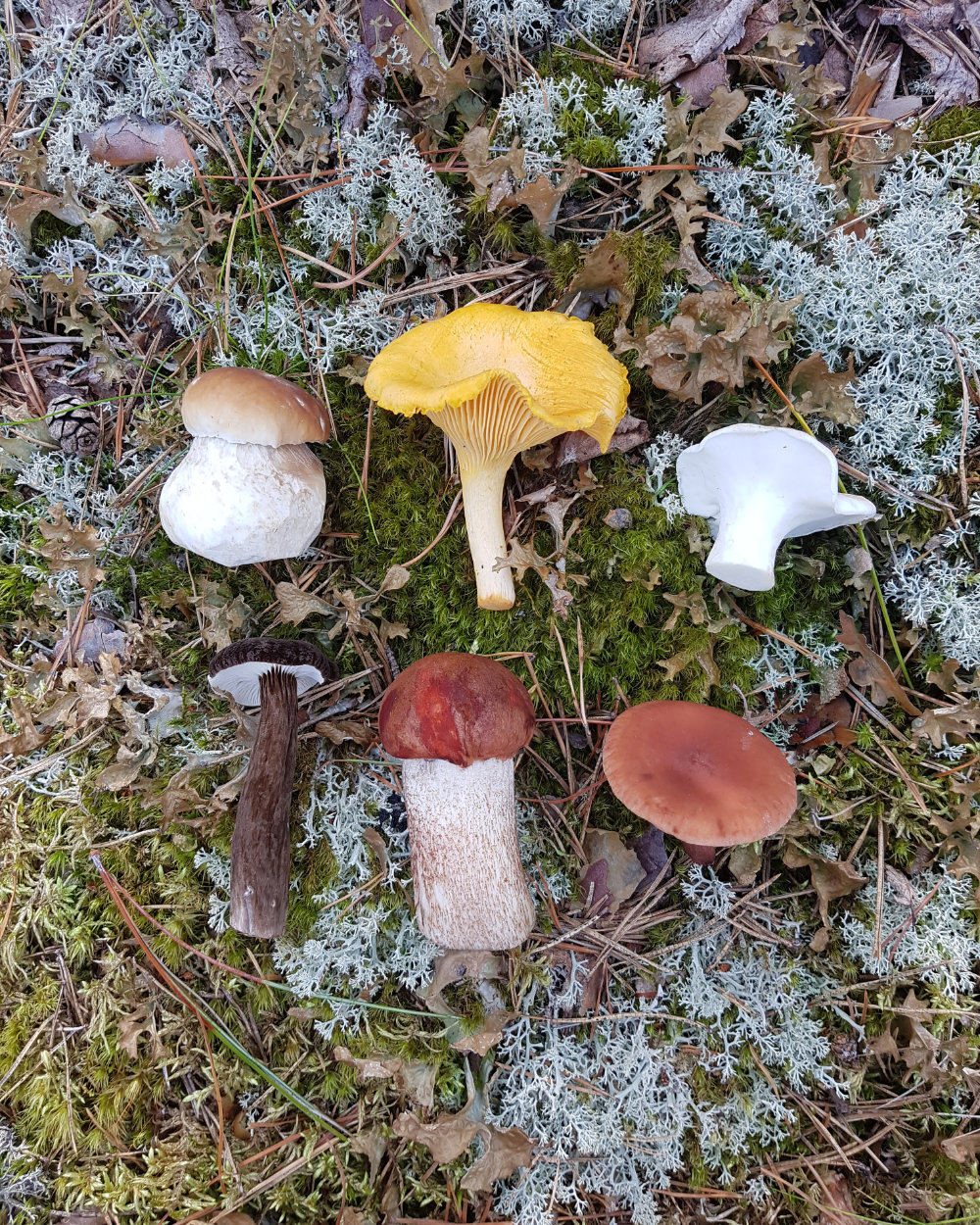 While rediscovering the Finnish nature, I realized the abundance of mushrooms in the forest ecosystems. Around me, I saw mushrooms from the tiniest of fairy rings to the biggest puffballs. I followed them to their kingdom: the kingdom of Fungi, which is also home to the yeasts that leaven our bread or brew our beer and the moulds that give character to Gorgonzola. The origin of the name “mushroom” got lost somewhere in the long history between human and fungi, but the English word likely took shape from the Latin muscus or mossy place. Since then, the story of mushrooms has followed a path from superstitions to science, from folklore to medicine and from food to fight off starvation to haute cuisine. The mushroom world has always carried a long shadow of fear and loathing, greatly due to the poisonous mushrooms and the difficulty to separate them from the edible ones.

“Around me, I saw mushrooms from the tiniest of fairy rings to the biggest puffballs. I followed them to their kingdom: the kingdom of Fungi, which is also home to the yeasts that leaven our bread or brew our beer and the moulds that give character to Gorgonzola.”

From mycophilia to mycophobia, the attitudes towards mushrooms have changed during history and societies. The Roman emperor Nero described mushrooms as “food of the Gods”, and the affluent Romans relished on truffles, porcini, and Caesar’s mushroom; known to be the favourite of the rulers. On the other hand, the rural population in the Nordic countries had deep-rooted distrust towards mushrooms as nutrients. The peasantry rejected the mushroom as food, even in times of food shortages up until the 19th century, when fashionable French haute cuisine influenced academics who started to spread knowledge about edible mushrooms. Today’s urbanized majority in Nordic countries have learned to appreciate these forest delicacies in cooking and there is a wide interest in mushroom foraging as a pastime. 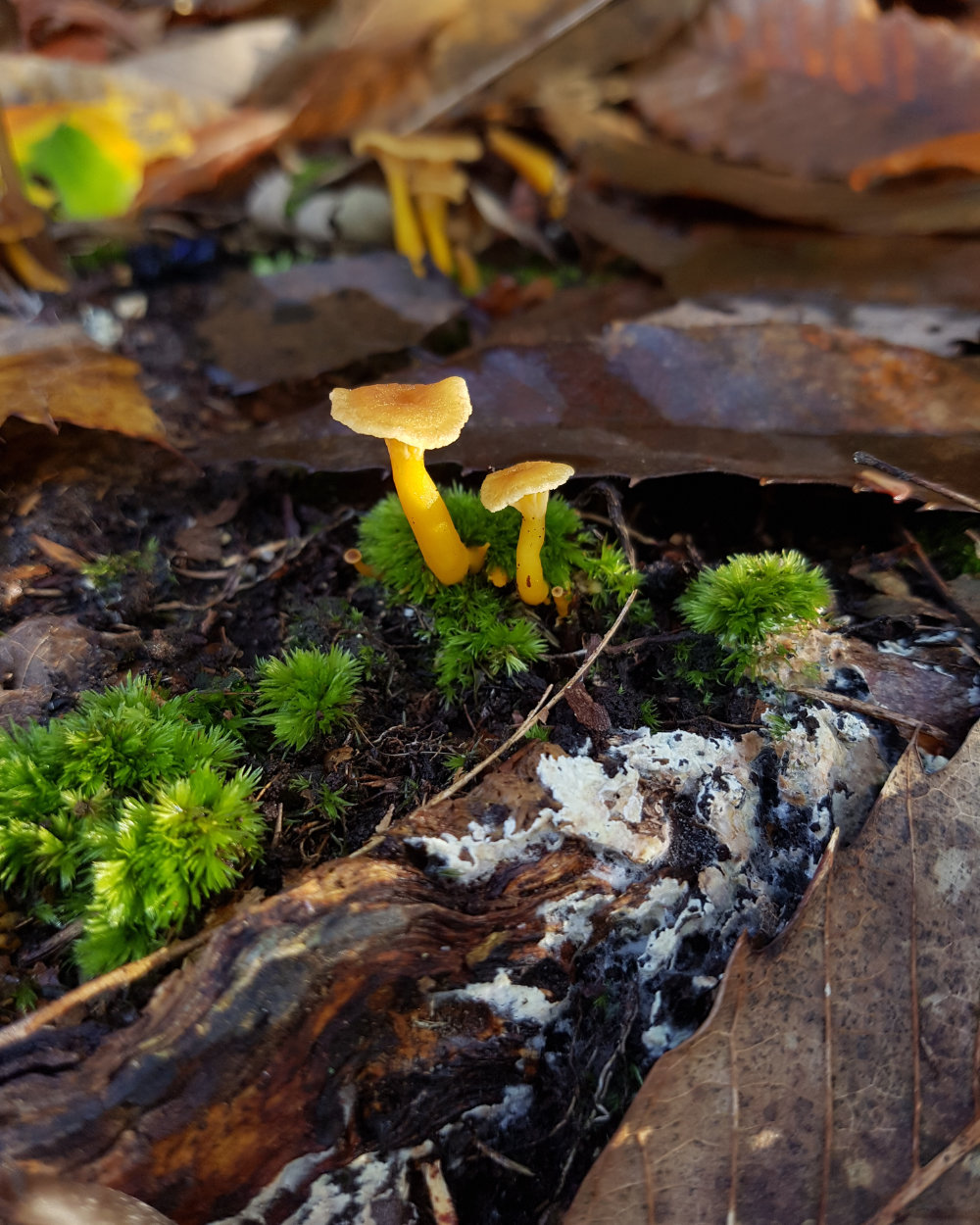 Mushrooms, the wild ones in the forest or the ones cultivated, are spore-forming fruiting bodies of fungus. They sprout from mycelium, a cluster of tube-like structures of hyphae that form underground networks. Mushrooms are the principal decomposers in ecosystems and their essential role in nature’s cycle of death and rebirth is due to their reverse eating patterns to animals: they produce exoenzymes or extracellular enzymes, which allow them to first digest nutrients and then ingest them. It also explains their role as symbionts. The symbiotic relationships with plant roots, mycorrhizas, and the role as decomposers are extremely important to healthy forest ecosystems. So, could mushrooms also provide importance to human well-being? Could we understand our world better through them? 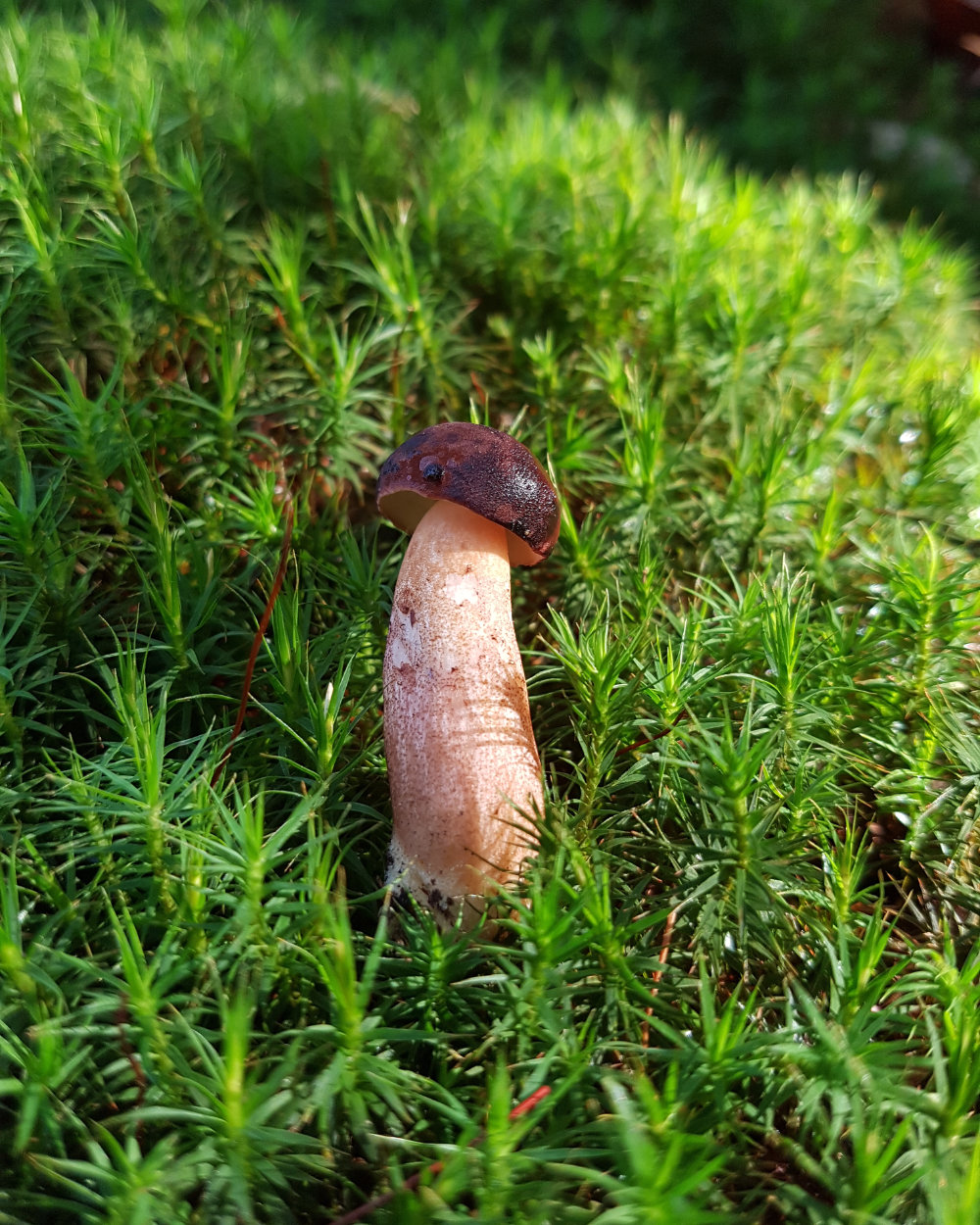 “I wanted someone to tell me things were going to be fine, but no one did” – Mai Neng Moua, “Along the Way to the Mekong”

While I was walking through the forests in Finland, the idea of incompleteness didn’t leave me alone. I had just started my time at the university in Pollenzo, met all these interesting people and suddenly I got thrown back to the start, back into my home country. I couldn’t help but think that this was not how it was supposed to be. I was supposed to be studying on the beautiful campus surrounded by inspiring people. Instead, I was alone in the forest, distant from everything. I walked the same rocky and twisted forest paths over and over again and the more I walked, the more I observed the lives of the mushrooms. 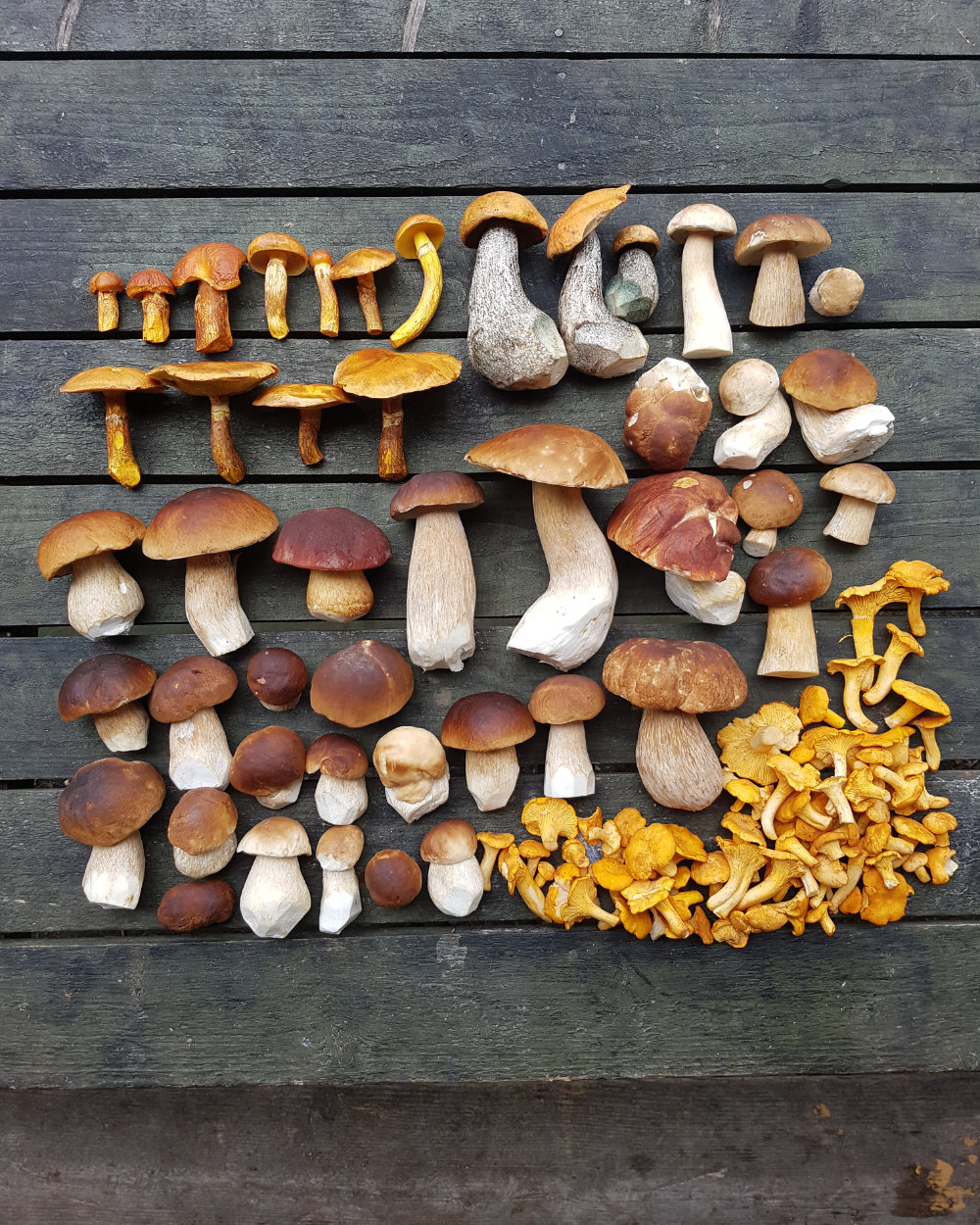 The most exciting thing about fungi, according to the mycologist Alan Rayner, is the indeterminacy of their growth. Shaped through encounter, the indeterminate life form that keeps growing and changing all their lives, it feels like mushrooms are free and independent from rules. The father of modern taxonomy, Carl Linnaeus, could not quite make up his mind about mushrooms. First, he classified mushrooms as animals in the subcategory of “chaos”, before giving them an own kingdom. Even though mushrooms are in their own kingdom, genetically they are closer to animals, including us Homo sapiens, than to plants.

“He doesn’t love wild foods just for their beautiful shapes and funky tastes, but Tallberg believes in the tranquillity and balance nature – his favourite supermarket and art gallery – can offer through wild food.”

The head chef Sami Tallberg, a Finnish wild food enthusiast, with almost a dozen cookbooks written and years of experience in restaurants, who I was lucky to meet and work with this summer, introduced me to the curious, healing and important world of wild mushrooms. He doesn’t love wild foods just for their beautiful shapes and funky tastes, but Tallberg believes in the tranquillity and balance nature – his favourite supermarket and art gallery – can offer through wild food. “It’s very easy”, he says, “to strengthen your connection to nature through wild food like mushrooms. You go out. You recognize the species by yourself. Then you pick them by yourself. And then you come home and cook them. Finally, you eat. Your connection to nature strengthens with every bite.” To be able to build a connection, to let nature restore, you need to face the wilderness.

According to studies by psychologist Koole, the wilderness is intrinsically associated with death. Nature can remind us of mortality, of its superiority. But the feelings of fear are linked with positive experiences in most cases: after the fear comes sharpened sensory experiences and more focused perception. Foraging for an unpredictable wild product like mushroom asks for concentration, mental stillness, and humbleness. When the world around you shakes, you can find comfort in the way unpredictability and disappointments of mushroom foraging reflect that precarity. As principal decomposers in ecosystems, mushrooms bring decay. We leave no room for hope if the story ends with decay – or it turns our attention to another side of the life cycle, of promise from ruin. When the controlled world we thought we had failed, the uncontrolled lives of mushrooms are a guide of resilience and adaptableness. What if at the centre of the systematicity we seek there is indeterminacy? What if our world is ready for sensing precarity? It is still holding its breath, but it is time to breathe out. The autumn aroma is here, an element of an ideal seasonality. I put golden chanterelles in my woven basket.

Long, Litt Woon. The Way Through the Woods: On Mushrooms and Mourning. Scribe Publications, 2019

Lowenhaupt Tsing, Anna. The Mushroom at the End of the World: On the Possibility of Life in Capitalist Ruins. Princeton University Press, 2015

Svanberg, I. & Lindh, H. 2019. Mushroom hunting and consumption in twenty-first century post-industrial Sweden. In Journal of Ethnobiology and Ethnomedicine 15, pp. 42

Kotowski, M.A. 2019. History of mushroom consumption and its impact on traditional view on mycobiota – an example from Poland. In Microbial Biosystems 4(3), pp. 1–13 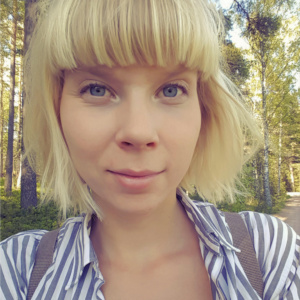 A fungaiola at heart and a cook by profession, she is a student of the Undergraduate Program in Gastronomic Sciences and Cultures. Her passion to discover and understand the route of food from field to fork has led her to work from star kitchens to Alp dairies and now she is immersing herself in the interdisciplinary food studies and the chestnut forests of Langhe and Roero.