Shedding a Natural Light on Terroir

When you stand in front of a hefty loaded wine shelf, maybe slightly lost, maybe knowledgeable there are several ways to choose a wine. Some do so by region. Piedmont, Languedoc or Rioja are commonplace wordings that could help describe your preference. Or, more commonly, people will affiliate a wine by the grape that its made of.

“I’m more of a pinot kind of gal”, would be an easy way for someone to ask for guidance in their search of a new a favorite. In theory, you could also ask for “a dry soil, salty sea fronts kind of wine”. The three, together – grape, region and geographical conditions – play a part in the concept of terroir. Gifted to us by our French founding father of the modern wine industry, terroir is an idea of place: it is a mix of climate, variety, traditional methods and soil – the sum of a specific time and a specific place. It can be broader, like Burgundy, or more specific, like Montrachet.

Once demarcation systems came about, during the 19th century, the word trickled into use. And, once some of those demarcations became more popular than others, the trickle turned to rain: now, a Bordeaux must taste like Bordeaux, and more specifically, a Saint Joseph must taste like a Saint Joseph. And so, our modern wine economy was born. This meant that one should be able to know what the product they are buying is going to taste like, or at least, have an idea of what they are going to get. Now…in ten years…and in twenty. Any adjustments, needed in the vinification process in order for the place to be better recognized, made for excellent winemaking and strong terroir. Similarity and reliability became key to good wine.

“The most common remark made by a knowledgeable wine classicist is that all natural wines taste the same. That they have no distinct language, and no sense of place, are claims, heard time and time again. “At least if each had its own distinct funk, but it’s just the same funk, all around”, I’ve been told.“

In 2015, Professor Matthew Goddard published his research on the microbial aspects of terroir. That is, on the presence of wild yeast in a certain place. In his work, he took 800 random samples of a spontaneously fermenting Chardonnay, at the Kumeu River Winery, in New Zealand. During 11 days of fermentation, he found genetic fingerprints of 380 isolates of Saccharomyces cerevisiae. Of those, there were 88 different genotypes. These begged the question: how did these strains of wild yeast find their way into the wine? Further analysis proved they all came into the winery by way of the grapes alone. 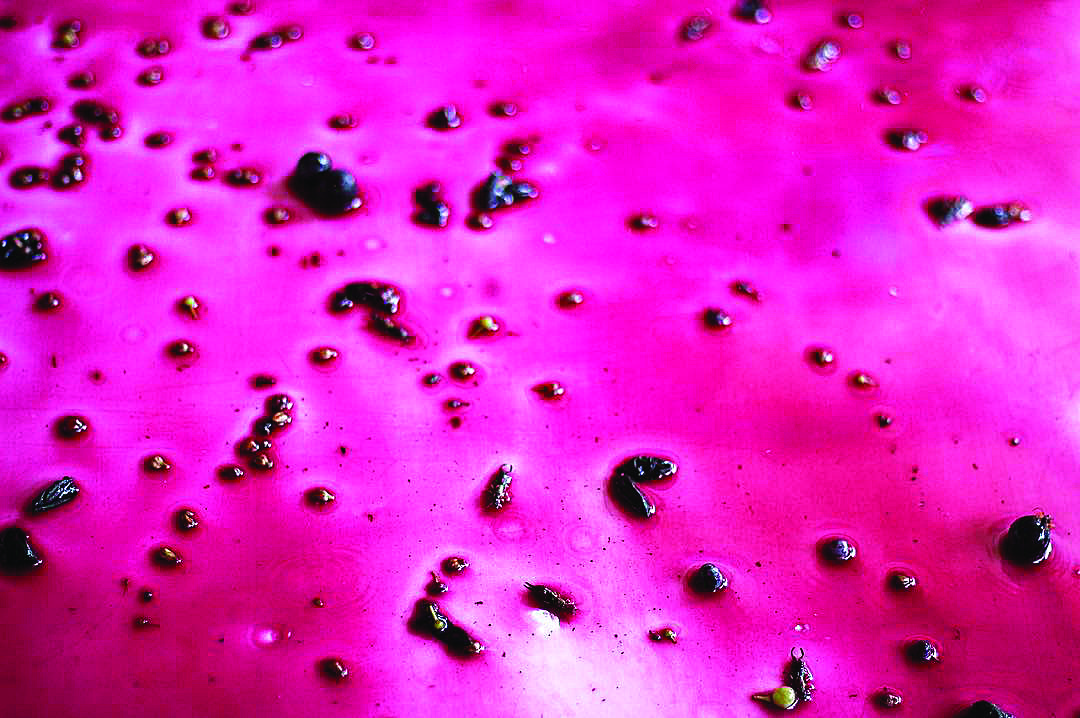 The species of S. cerevisiae is no stranger to the fermentation fan. Known as brewers yeast, it is the commercially produced and bought species, used internationally in wine fermentation. But the isolates Goddard identified in New Zealand – one of the later lands to welcome vines and its production onto their turf – had less than 0.4% in common with those internationally used strains. So what is terroir, really?

The most common remark made by a knowledgeable wine classicist is that all natural wines taste the same. That they have no distinct language, and no sense of place, are claims, heard time and time again. “At least if each had its own distinct funk, but it’s just the same funk, all around”, I’ve been told. Somehow, vice versa, most fans of the recent trend of naturally produced wines will claim that all those classic wines, praised excellent wines of terroir, actually all taste a bit the same; that they often lack character or element of distinction. So, perhaps, the Nouvelle Vague washing the world of wine in colors of grapefruit and peach is a good time to rethink this century old, much-valued concept of terroir.

Since it has yet to receive it’s legal status, we can argue deep and wide about the definition of these uprising, trendy natural wines. Some insist natural must mean zero sulphites, others advocate no wood. It’s a long list of debating points, starting from the most extreme form of non-intervention, all the way to methods correlating with organic and biodynamic, which the law already recognizes. But within this process of definition, there is one point everyone agrees on: a natural wine is the product of clean grapes and spontaneous fermentation. Hence the name, a juice that turned into a wine, and wasn’t made into one.

The agreement on spontaneous fermentation as a key component of natural wines stems from the exact same sense that set professor Goddard out on his research: if a wine is about the specific conditions of a place – that the winemaker only needs to allow it to be best expressed and kept throughout time – then how is it possible for wild yeast NOT to be part of the terroir?

Consider sourdough bread. Why are all well-respected bakers not lashing out on sourdough? I mean, it smells! And, it’s sour and unpredictable. Why is a mother yeast still the most respectful way for a baker to produce the best loaf? Imagine if bakers everywhere started claiming the need for perfection and unity by means of instant little bags of yeast.

“Rethinking terroir, in the light of the natural wine movement, is an important milestone for the conventional-natural discussion, inseparable to the positive evolution process awaiting the wine market at the end of this decade. So what gives a place its taste? There has been no better time than now to wonder.“

Having drunk mostly natural wines for the greater part of my adult life, I can normally have a hunch on whether I’m taking a walk through Georgia, Slovenia, the Jura or the Sicilian coast. A long-standing gusto for these particular places has, with time, strengthened my ability to recognize them. I imagine that, in twenty years time, I will know how to identify them with confidence, which is commonly my response to the conventional fight over terroir. I find it hard to believe that if one had been tasting natural wines of Kakheti or Priorat, with the same dedication and attention they have been tasting the longstanding houses of Sancerre or Barolo with, they wouldn’t be able to note a distinctive sense of place. Perhaps, even with a sharper flavour of terroir than one might expect.

More so, this thought raises another challenge in how we think about wine: Isn’t it ironic to speak so much about soil types, sloping, vintages and traditions of one specific hill in Tuscany only to then go on and put the wine from that place into French oak? Or, generally speaking, what is it to the idea of terroir if so many wines pass a long, loving contact with wood from another country, sometimes on the complete opposite side of the planet. A barrel, too, breathes place. Natural wines seem to allow the terroir a greater expression in more ways than one.

Rethinking terroir, in the light of the natural wine movement, is an important milestone for the conventional-natural discussion, inseparable to the positive evolution process awaiting the wine market at the end of this decade. So what gives a place its taste? There has been no better time than now to wonder.

She's an alumna of the University of Gastronomic Sciences, a writer and producer and if she's not on the road somewhere, you're most likely to find her by a messy desk prepping for an event or working on an article, with a bottle of Pet Nat rosé on one side and a stack of books on the other. She has written for Delicious AU, Forbes, Haaretz, Eater, and other platforms in Israel and abroad. She is fascinated by themes of food diplomacy and conflict.