A Written Recipe Where There Shouldn’t Be One 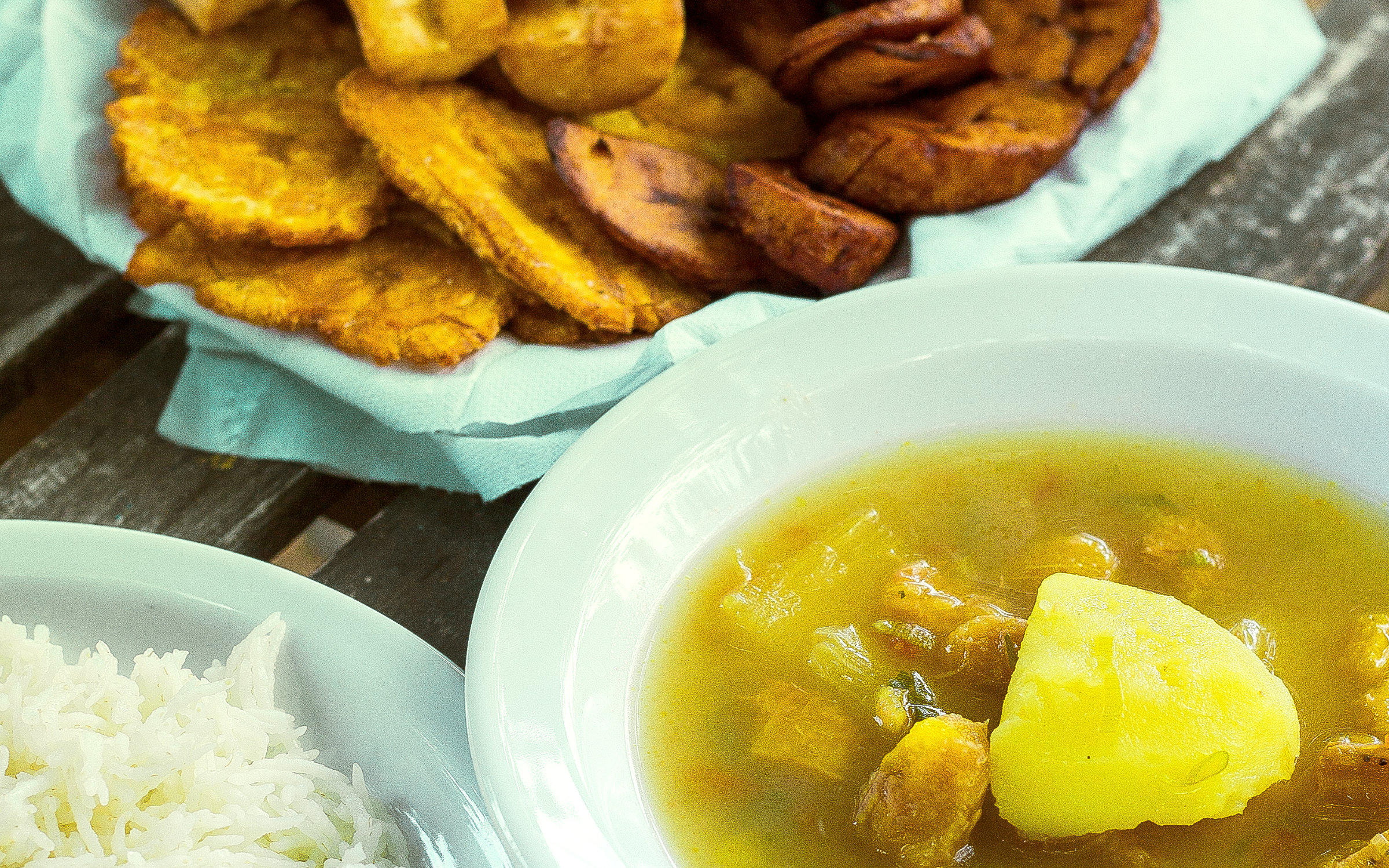 It’s already hot at 9 a.m. in Cali when my aunts barge into the apartment, carrying large pots and bags with food, determined to make Sancocho de Gallina in my mother’s tiny kitchen. My aunt, Orfilia, puts two scrawny gallinas into the pot, covers them with water and brings them to a boil. The pot of coffee is on, as it is mandatory to have a tintico while the gallinas boil. Two other aunts begin to peel and cut green plantains, yucca, and potatoes, which they keep in water for freshness. I peek into the pot, inspecting the dark-coloured meat of the bird, its long legs made even longer by the scraggy feet and sharp nails, and the flabby neck punctuated by the head.

Shouting fills the room as my aunts begin their habitual argument about the steps of the sancocho-making-process. My mother, the family matriarch, chimes in from the couch: “Where did you get the gallinas?” Orfilia explains that she found a lady who raises gallinas de patio, or backyard hens, near the city, so she secured these two a few days ago because it’s not always easy to find good hens in the city. “They better be good,” my mother shouts. After growing up in a farm where her grandmother raised hens and chasing them around when it was sancocho day, she claims to know the difference between the flavor of hens raised by common feed alone and those raised pecking and rummaging around the yard; not to mention the flavor of modern store-bought chicken, or the idea of adding it to the soup: “It’s not a chicken soup, it’s a sancocho!”

My fondest memories growing up revolve around scenes like this; my mother and my aunts cooking Sancocho de Gallina over a wood fire. They were pushed out of their land in the late 60s due to the civil war, leaving everything they knew behind except their food traditions, which they used to unify our family in a big, unknown city.

The crowded kitchen counter only allows for two small cutting boards, keeping me out as I attempt to join the action. Even the rice cooker finds a new home on top of the laundry machine. My aunts want me to sit down and enjoy the show as they prepare my favourite Colombian fair, plus they can’t take another set of elbows in the kitchen. I look in from the other side of the open wall, taking notes as they split and chop thick, long scallions, peel and dice tomatoes, wash culantro and cilantro leaves. Orfilia cuts the viceras, the hen’s organs, including the madre pouch, which contains little shell-less eggs, and adds them to the soup, together with mazorca, or sweet corn.

A puff of steam covers her as she lifts the lid from the pot and takes the hens out of the boiling water to cut the feet, head and neck. Like vultures my aunts snatch them from her hands, arguing about who ate the neck last time. Luckily there are four feet to share, which they parade victoriously through the living room, as they chew on the cartilage around the nails. A deep, rich aroma, reminiscent of duck confit and carried by the perky fragrance of the herbs, takes over the loud conversations. The turbid soup takes on green highlights and thickens slightly as the starchy vegetables are added into it. 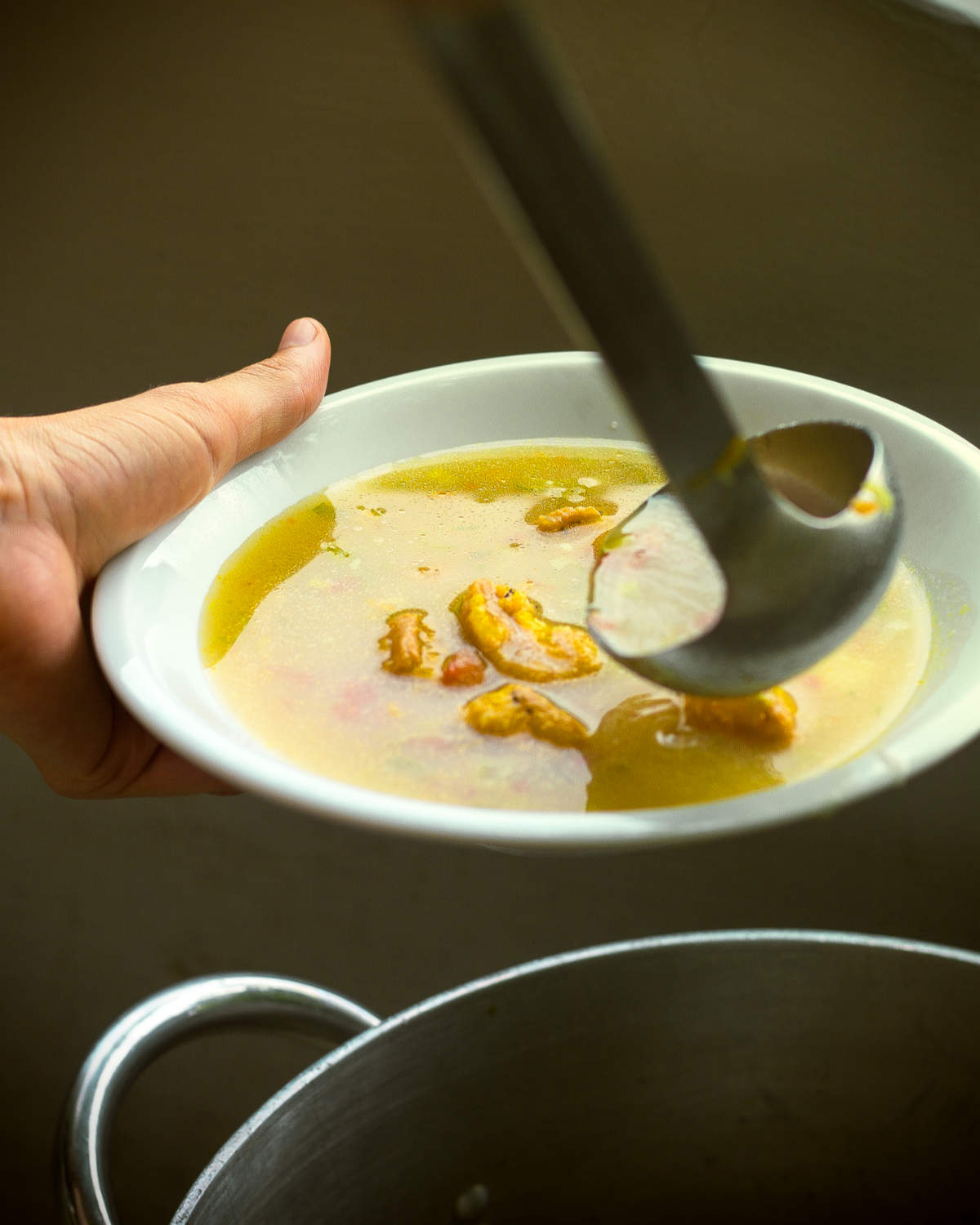 It’s almost noon and the rest of the family members arrive making conversation impossible. I finally make my way into the kitchen, cutting more scallions and tomatoes for ahogado, a sauce flavored with cumin, turmeric, paprika, garlic and salt, to bathe the hens before serving. My aunts demand that I sit. No argument. The room slowly quiets as my aunts distribute bowls of soup studded with the tender plantains and potatoes; and plates with rice drenched in hen with ahogado, plus a healthy serving of avocado. The soup tastes of earthy mushrooms and caramelized meat; each slurp delivers the intensity of rooted traditions, balanced by the flavor of the hen covered in bright spices. I indulge in the crowded room of busy eaters, their familiar faces and their need to yell when talking would do. Like many in the new generations of Colombians, I have never cooked my own sancocho. If the faith of backyard hens and Sunday gathering traditions were in my hands, they would be doomed. I let the previous generation take the burden of keeping the tradition alive, and request their expertise on my yearly visit to Colombia – until recently, that is.

I’ve tried sancocho in restaurants, but it’s not the same. I find it flat, insipid, and with a slight taste of mediocrity. So, in an attempt to honour my family tradition of Sunday gatherings around Sancocho de Gallina, I decide to prepare it in Italy, the most unlikely place to find the ingredients. I heard from a Brazilian classmate that cassava was easy enough to find, and she also showes me how to peel it, a skill I had forgotten. Another classmate mentions her neighbour raises backyard hens, and she could get one for me. A Peruvian friend has plantains, some of which we fry and snack on while cooking, and my husband helps with finding the perfect spot for outdoor cooking.

I call my aunt Orfilia and ask for a recipe, but there isn’t a written one in my family – for any dish. Every important dish has been learned in the kitchen through watching, asking, and doing, engraving the processes in the hands, muscles, and the senses that awaken with the touch of the ingredients. Like a skilled musician extracts melody from the strings of a guitar, my aunts and my mother create a melody of flavours from the humblest of ingredients. 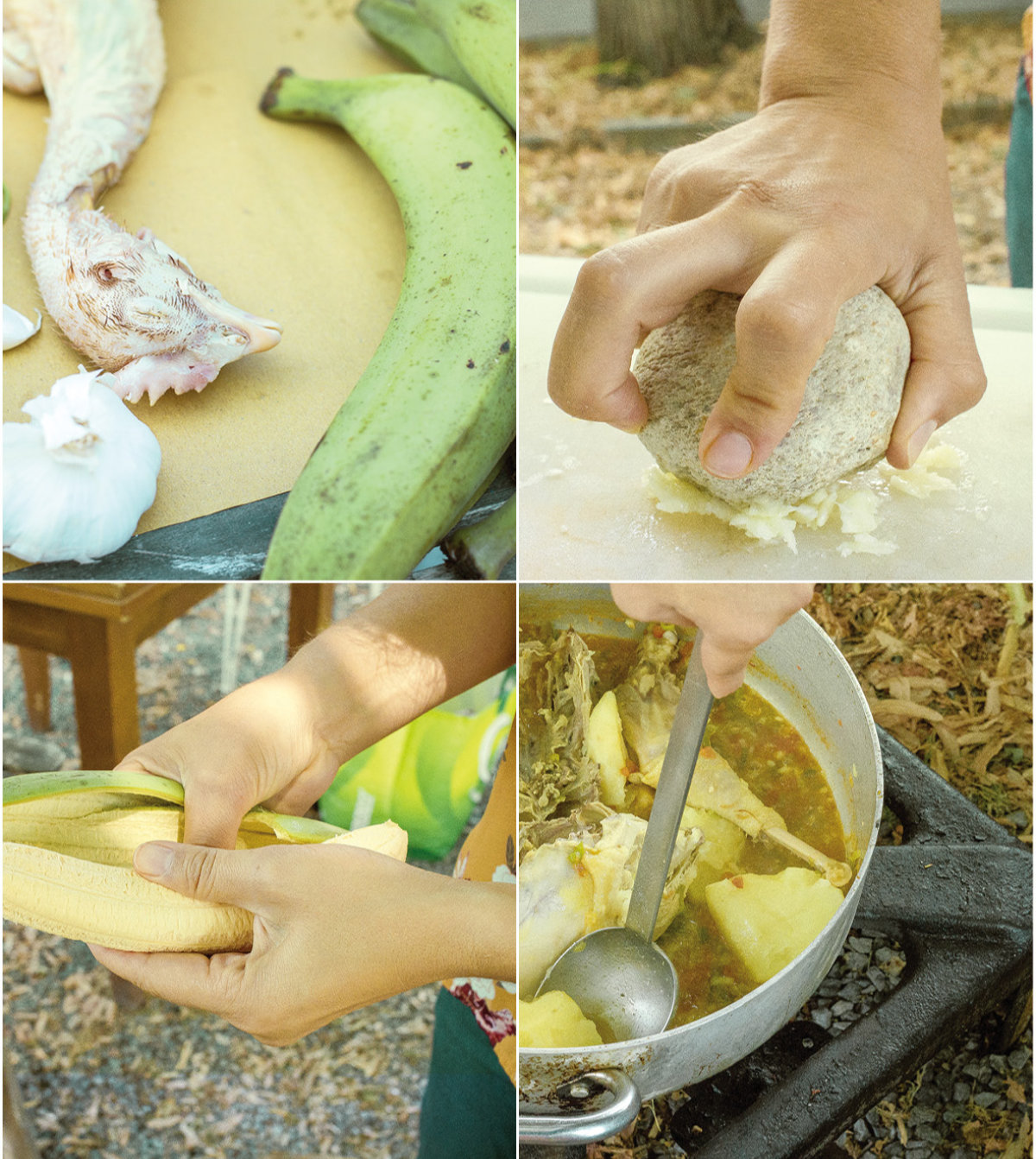 With great flair, my aunt walks me through her memories, revealing the secrets passed on through generations of women cooking, first on a wood fire and later on a tiny city apartment kitchen. The secrets are embedded in the instructions: Make sure to use a pasture hen. Add just enough water to cover the hen; the goal is to make a rich broth with the boney bird and attempt to soften the meat. If you can, use a pressure cooker to speed up the process and help the meat relax further. Don’t cut the plantains with a knife, break them into small pieces with your hands, this helps the starch to release easier and thicken the soup. Use starchy potatoes to further help thicken the soup. Don’t overpower the flavour with spices. Check the seasoning as you go. Be patient.

On a Sunday afternoon, with the support of my international chosen family, I cook the hen into my first sancocho and enjoy the luxury of time spent conversing and sharing food, this time from the other side of the kitchen. 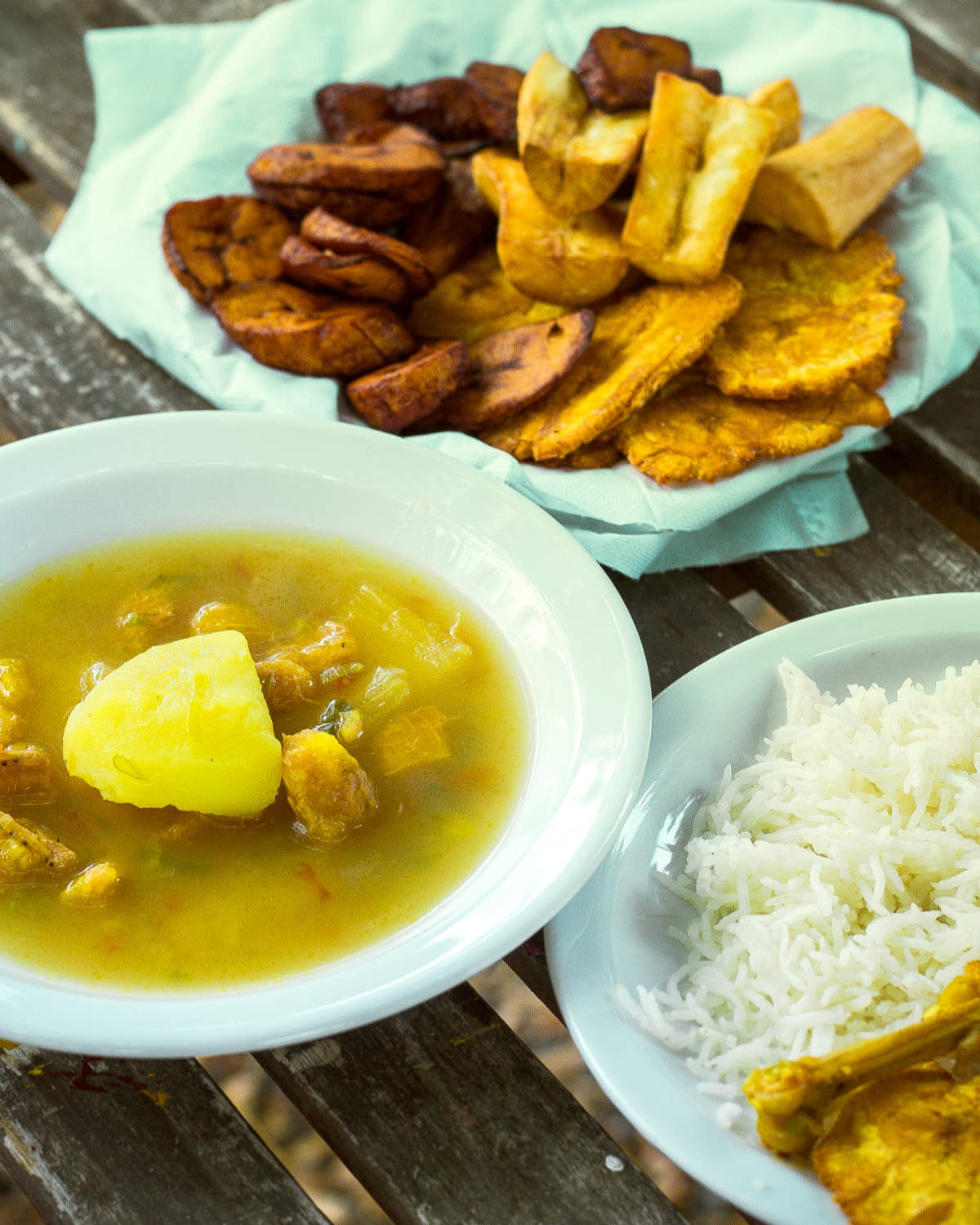 3 medium-size starchy potatoes, like russet or Idaho, peeled and quartered

2 sweet corn on the cob, peeled and cut in four pieces

1- Place the hen in a pot and cover it with water, add 1 tablespoon of salt. Bring to a boil. Simmer until the meat is tender. Or pressure cook for 40-50 minutes.

2- Add the plantains and simmer for 10-15 minutes, stirring from time to time to release the starches.

3- Add potatoes, cassava, 1/3 of the chopped green onions, a couple of tablespoons of the chopped tomato, 1/2 teaspoon cumin, ¼ teaspoon paprika and turmeric, half of the cilantro, and 1 teaspoon of salt, or to taste. Simmer until root vegetables are tender.

4- In a separate pot, heat 1 tablespoon of oil, add the remaining green onions, tomatoes, and garlic and cook on medium to soften them, about 5 minutes. Add the remaining cumin, turmeric and paprika, ½ teaspoon of salt, and a pinch of black pepper. Add a ladle-full of the broth to the aromatics together with the hen pieces. Simmer at medium-low heat to coat the hen in the sauce. Add more salt if needed to your taste

5- Serve the hen and sauce over rice, with fried plantains and a side of avocado, alongside the soup. 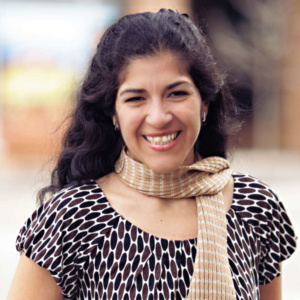 She’s passionate about food education. As a former pastry chef, her goal is to develop educational platforms that bridge the gap between a sustainable food system and the community, specifically through culinary and agricultural programs for high school and college students. Paula is a recent graduate from the University of Gastronomic Sciences.