A Story about Pasta di Gragnano

Pasta is not just food. It is a historical and social discovery that, similar to fire or the wheel, has changed the history of humankind and of our food culture. There are many stories and legends that follow it, as multiple nations have claimed its geographical origin for themselves. In between all the myths, however, there is the city of Gragnano, a small village in Campania where you can find sunshine and sea breeze, scented with grain and a salty tang – and a big part of pasta’s history.

In this article, I will lead you to discover the elusive world of pasta and will pass on its secrets, suggestions, recipes, focusing on products that will surely make you a pasta addict. Follow the story and start to smell the semolina …

How the story begins.

Without any doubt, pasta is one of the most iconic Italian products, a noble, yet simple and versatile food that has defined the boundaries of a whole nation’s eating habits and conquered the taste buds of writers, travellers and tourists over the centuries. A simple mixture of durum wheat semolina and water has changed the gastronomic history of the entire world.

Around the year 1000 AD, the Arabs brought the art of making Vermicelli and Macaroni to Sicily, from where the secret quickly leaked to Naples and its surrounding areas. And so it was that the people of Naples, then one of Europe’s most populous cities, changed from being mangiafoglie (leaf eaters) to mangiamaccheroni (macaroni eaters). Many writers have immortalised the enjoyable scenes and savoury sensations experienceable when visiting the city in their works, linking their memories to the smell of the grain, to the amber hue of the semolina, to the skill of the pasta makers and to the art of wrapping Spaghetti in their hands and eating it in the streets, spreading the scents that evoked an entire civilisation.

“A simple mixture of durum wheat semolina and water has changed the gastronomic history of the entire world.”

The Southern Italian infatuation with pasta has expressed itself mostly through a culinary creativity that has marked out the Neapolitan people around the world, giving life to a heritage and a tradition of production that has become ingrained in the history of the city and its daily lunchtime habits; that has carried with it the culture of conviviality and of its sacred rituals wherever it went. Yet, if the people from Naples have developed the most active centre of artisanal production of the so-called “white art” over the centuries, it has above all been in order to satisfy their own appetites, pursuing the unique sense of satisfaction that only pasta can give to the many hungry stomachs of their widely extended families. 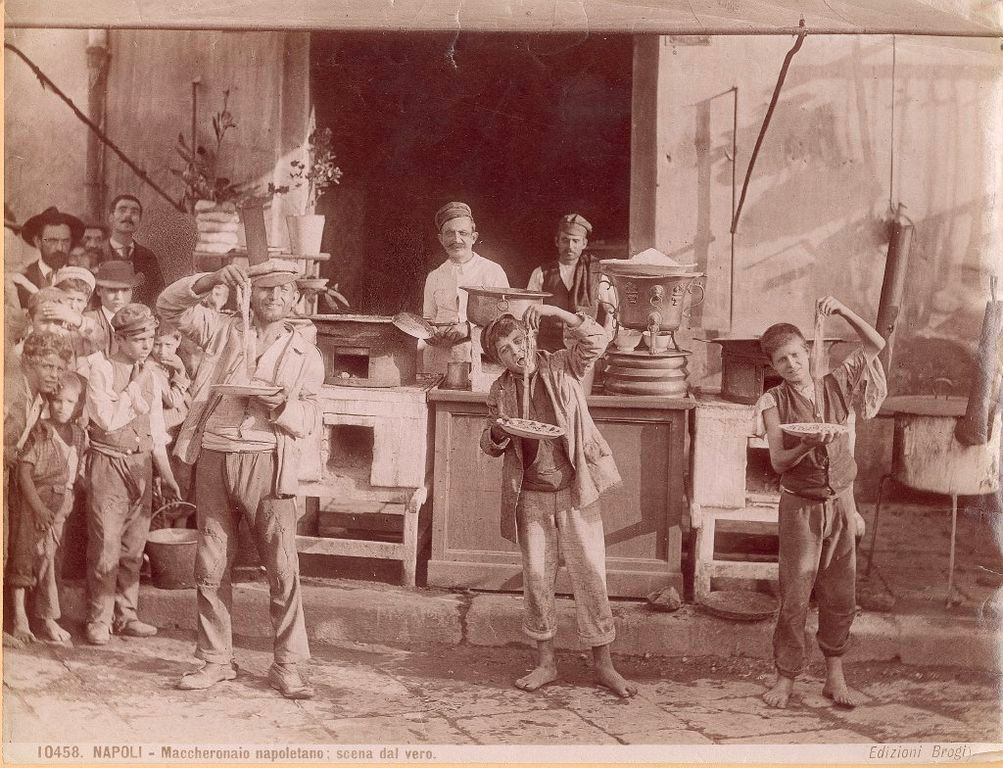 All over the Neapolitan area, most famous for its “white art” was Gragnano, known throughout the world as the Città dei maccheroni, thanks to its pasta-centric vocation. The sea breeze and the mild climate conditions make this place perfect for the production, transformation and drying of pasta. The city, in fact, is set between the Lattari Mountains and the sea, and can, therefore, count on constant ventilation from the slightly humid atmosphere to dry the pasta slowly and gradually, and on pure, chlorine-free water from the neighbouring land, providing an essential resource for the production. In addition to this natural and climatic prosperity, a hundred years of experience, craftsmanship and an irrepressible passion for quality and research have contributed to the realization of a distinctive product. In fact, 100% durum wheat with a minimum of 13% protein content and the bronze dye give unmistakable characteristics to the final product: a rough surface that allows sauces to hold on and keeps all the tasty flavours of fresh wheat and the unique organoleptic properties.

“All over the Neapolitan area, most famous for its “white art” was Gragnano, known throughout the world as the Città dei maccheroni, thanks to its pasta-centric vocation.“

Until the late 1800s, pasta production remained delightfully traditional. Every day, it would start at dawn with the preparation of a water and semolina mixture, cooked over the fire, poured into a wooden tub and worked with the bare feet of the ‘mpastatore, the pasta mixer. The next phase was the kneading, or gramolazione, done with a plank of wood, which would beat the dough in a measured rhythm so as to refine it. The dough would then go into the ‘ngegno: fitted with the trafila, which would give the pasta its individual shape, while the dough would be cut to length by hand, using sharpened blades or rudimentary scissors. Almost done, the pasta would then be put out to dry in the open air, the longer shapes suspended over canes, short ones in perforated drawers. 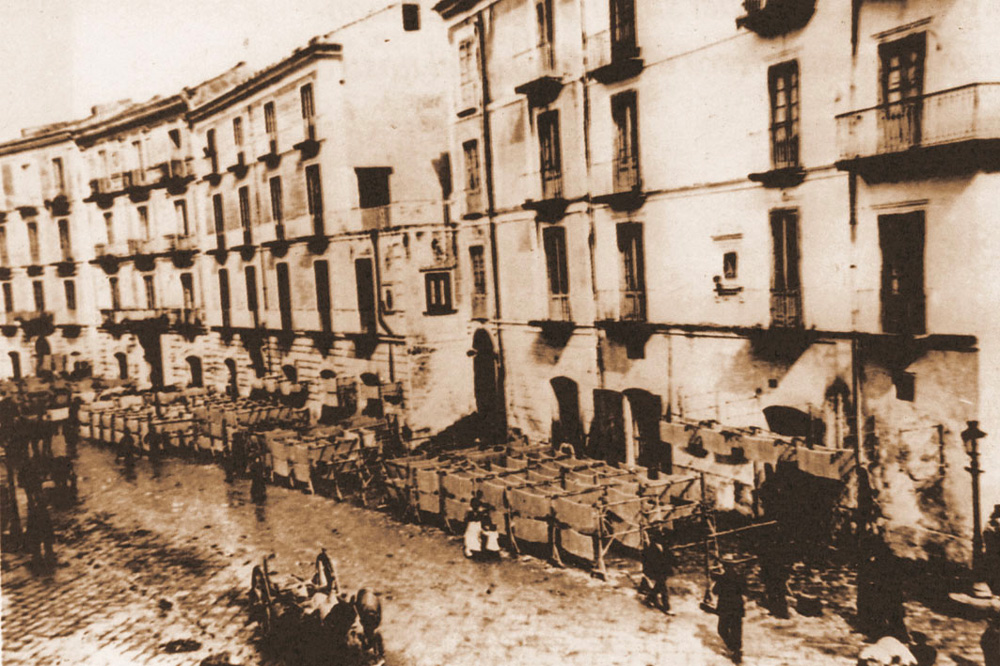 Pasta factories in Via Roma Gragnano.

Despite increasing industrialisation, the recipe for making macaroni has remained essentially the same. The pasta is still made using only water and durum wheat semolina, although the techniques have changed completely. When the Braibanti brothers from Milan introduced the continuous press, in 1930, each phase became mechanised, as their invention allowed the mixing, kneading and pressing of the dough through the pasta shaper, to work one after the other, without ever interrupting the production cycle. Naturally, many families dedicated their lives to producing pasta, among them the Di Martino family, who was shaped by chance and necessity, rooted in passion, the tenacity and their entrepreneurial spirit. A good hundred years after his grandfather, Giuseppe di Martino, the founder and President of the Consortium “Gragnano Città della pasta” received the first EU recognition of quality assigned in Italy for the pasta produced in this city in 2012. After a history of five centuries, the pasta was awarded the certification of Protected Geographical Indication (PGI). 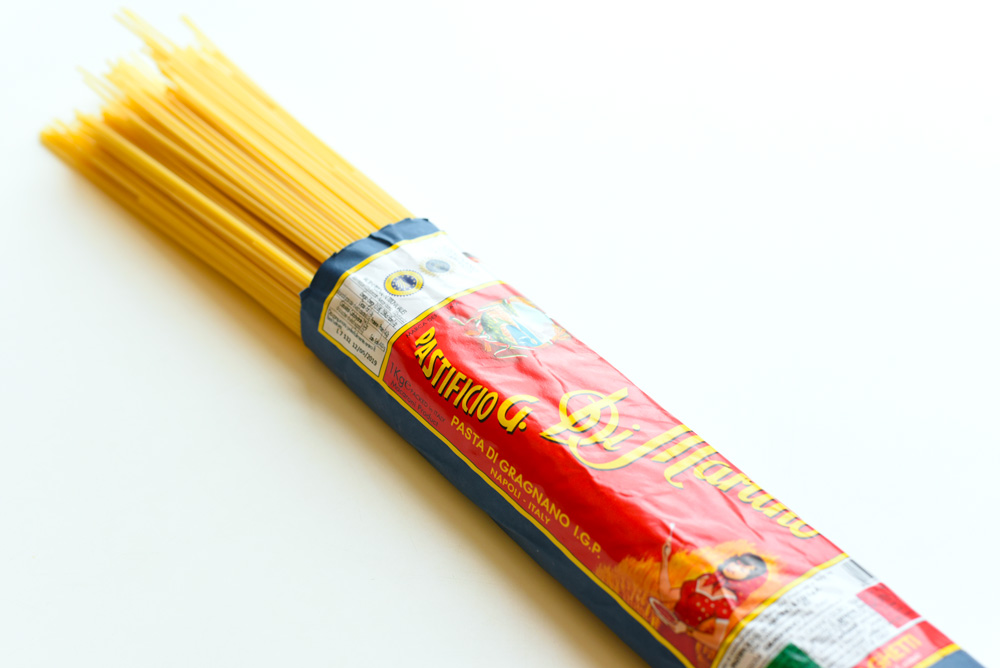 Linguine with courgettes and wedge clams

In a pan, brown the garlic with oil and chilli pepper, then add the courgettes and salt to cook over medium heat. Meanwhile, open the wedge clams and put them aside, while keeping their water. Cook the pasta al dente, then add it to the pan with the courgettes. Pour the shelled wedge clams into the pan together with their water and finish cooking. Garnish with fresh parsley and serve.

*If you want to learn new recipes and taste a perfectly prepared pasta dish, come and visit the Di Martino’s booth at Slow Fish in Genoa – P.zza Caricamento. The program will include training sessions and tastings of PGI Gragnano pasta, combined with local fish from the Mediterranean sea. On May 9th, a show-cooking event will display different consistencies of fresh and dried pasta with fish, blending the flavours while also respecting the sustainability issues promulgated by Slow Food 🐟 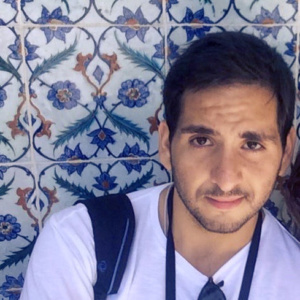 Born in Gragnano and genetically linked to pasta, Giovanni now works in the marketing department of a historic pasta factory. He studied Marketing & Management in Turin, Business Economics in Naples and he is about to graduate in Food Innovation and Management at the University of Gastronomic Sciences. He is passionate about Food; loves eating it, studying it and sharing it. Proudly Neapolitan, he also loves the sun and the sea, his favourite dish is pizza and his Sunday lunch lasts for several hours.