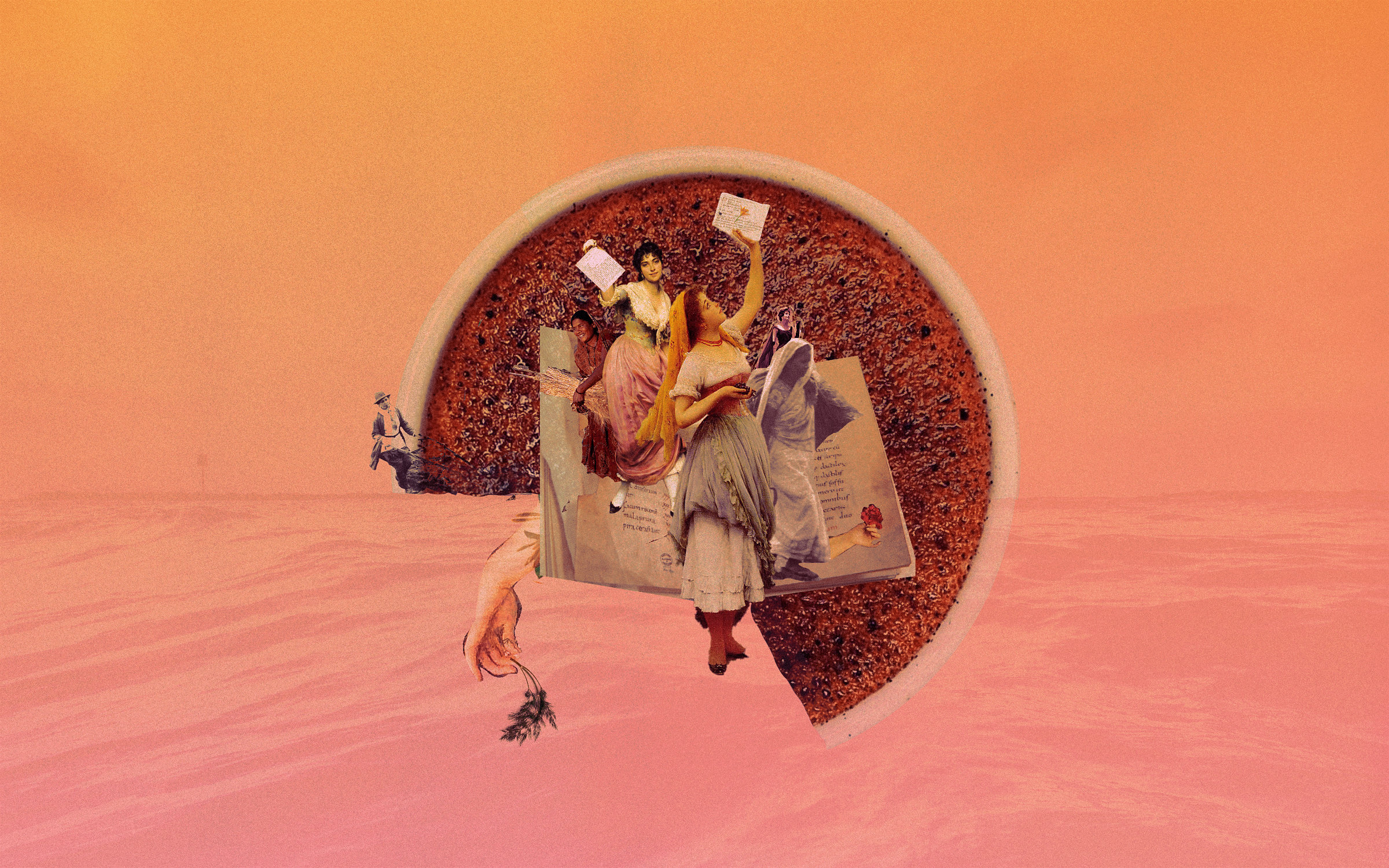 Food is culture. It’s intrinsic to who society is and what it represents. Consequently, documenting this culture is vital to understanding who we are. Though the means of preservation has evolved alongside us, one thing has remained constant—the idea of the woman who nourishes, both through her biology and her domestic duty.

However, if society has always agreed that food is a marker of the female identity, then why have so few women actually been acknowledged in food media? I decided to explore this question in my thesis titled, ‘Sous Chef: The Secondary Roles of Women in Food Culture Since the Dawn of Time’. By investigating the relationship between women and food and how women have been portrayed in media outlets, three factors ultimately explained the lack of female representation: patriarchy, psychology and power.

Our earliest neanderthal ancestors had a food culture based on cooperative labour, supported by evidence like similar calcified matter found on dental records and almost identical skeletal makeup between men and women. But, this shared labour changed as humans evolved. The advent of farming meant males worked outside, while women took on a more domestic role inside rearing children and, essentially, populating the planet.

Flash forward several millennia to ancient Mesopotamia. These ideas of men as the providers and women as the domestic servants were still being maintained, emphasised in the first cuneiform writings that depicted very little about women, instead chronicling the lives of men who actively participated in society. Perhaps this is why researchers believe that the first known collection of recipes, while written by an anonymous group, was authored by males.

Moving into the ancient Greco-Roman era, character-laden tablets were replaced by papyrus scrolls written by many male philosophers and gastronomes, outlining symposia and convivia (i.e., Plato’s ‘Symposium’, Athenaeus’ ‘Deipnosophistae‘, Apicius’ ‘De Re Coquinaria’). Because men continued to write almost exclusively about other men, women were only briefly mentioned in texts despite their role as cooks, servers and entertainers. But, artworks tell a different story. Painted vases allude to substantial female involvement in the festive food culture, with women breaking bread and drinking in female-only gatherings.

“Because men continued to write almost exclusively about other men, women were only briefly mentioned in texts despite their role as cooks, servers and entertainers.”

Passing into the middle ages, there was a more significant silence of women due to the support of hierarchies where the church reigned supreme. Perpetuating ideas of regulating women through fasting and undernourishment, it was the church that insisted women conform to their motherly and wifely duties. Any woman who rejected these norms was deemed evil or even a witch, which was a crime punishable by death. Interestingly, many famous texts written during this time (‘The Bible’, ‘Liber de Coquina’, ‘The Forme of Cury’) were published by unknown authors. This begs the question of whether women could have been behind some of these works, given that anonymity would have meant a greater chance of publication and male readership.

Luckily, the start of the modern era in the 18th century focused on revolutionising the world, which bled into the foodscape. Beginning with the French Revolution, many chefs were out of jobs, leading to a surge in restaurants. It also meant that more women were employed as a means of cheap labour to help those operations run smoothly. Yet, not only were women paid less, they were also given the title of mère instead of chef, which discredited their skill. However, opportunities for females were increasing. Since there was also a desire to make cuisine and culinary media accessible to the everyday person, female-written cookbooks slowly started to appear.

Launching into a media boom that saw rapid developments in tech, this extended into the culinary scope where taste began to transcend the senses. Written media continued to thrive, especially during WWI (but also WWII), where many female writers and journalists pioneered wartime-inspired articles, recipes and cookbooks promoting canning, preserving and rationing. The advent of the radio also allowed more women to have a place in food media; however, many functioned as mouthpieces reading the scripts penned by corporate businessmen.

Likewise, the introduction of the television was vital in the representation of food culture and females occupying said space. Many food personalities like Julia Child were born, sparking food networks and a variety of programming to be diffused. However, that didn’t mean there weren’t (and still are) differences in programming. Male hosts currently average about 430 hours a week of airtime versus females who receive 103 hours. The content of programs is also quite gendered, with women sharing simple meal ideas for family dinners while men host shows focused on adrenaline-riddled food competitions and adventures.

Interestingly, we’ve now entered into the #foodie phenomenon, where the online world of blogs and social media platforms has given space to different voices and styles of writing, sparking a sort of foodie feminism.

“Since there was also a desire to make cuisine and culinary media accessible to the everyday person, female-written cookbooks slowly started to appear.”

Far from a new concept, feminism advocates for the equal rights of women and dates back to the 18th century when Mary Wollsteonecraft penned ‘A Vindication of the Rights of Woman’, which urged the recognition of women as people, not property. It would take almost a century of battling for equality until the next wave of feminism would occur in the 1960s, which was characterised by advocating for reproductive and occupational rights, along with fighting oppressive institutions. The third wave of feminism would happen several decades later, in the 1990s, embracing nonduality and rebelling against gender norms. Currently, we have entered a fourth wave that promotes empowerment and inclusivity of all women.

But why is feminism important under the guise of food media? Well, as history has demonstrated, women have been massively ignored and forgotten. What’s more, even in female-dominated sectors like food journalism, only a fraction of women are actually represented and recognised for their work. Problematic for an array of reasons, this oppression of women in food media stems from three factors—patriarchy, psychology and power.

Patriarchy depicts a society where males dominate and have certain advantages over women through elements like the maintenance of ideas like wage gaps, unequal rights, undervaluing of tasks, imposing gender norms, using violence as a tool and supporting the continuation of patriarchy. Not only do these factors act as challenges for women to enter food sectors, but even women who occupy spaces in food are left to face the complete control of men. Moreover, the lack of executive positions, airtime, press or remembrance of females in food equates to a perceived lack of importance of women by men. This, in turn, translates into a loss of desire to break a system that can’t be broken unless a man decides otherwise.

Next, psychology plays another key factor in oppression. Various studies have shown that there is no marked difference between the sexes. In fact, gender is taught and learned, meaning that patriarchal societies impose specific ideas like “women should be seen and not heard” or that “a woman’s place is in the kitchen”. These perpetuated stereotypes then become ingrained within us over time, allowing for inequality to flourish as men reap societal benefits while women’s opportunities are massively limited. Interestingly, when comparing the patriarchal attitudes towards food in a professional light, ideas change based on bias, which leads us to the third and final obstacle⁠—power.

“While the odds have been stacked against females, things are starting to change with many women beginning to crack the crème brûlée ceiling.”

Males hold monopoly power over society and their control spans over a plethora of industries. From the start of evolution with the introduction of farming and then militarisation, the power dynamics between the sexes shifted, which saw the strength of men and the silence of women. Men have the final say, and often this is because they hold the most capital. When the world of food became monetised, it was suddenly less attainable for women because our capitalist economy allows those with lesser assets (typically females) to be exploited, limiting their chances of climbing corporate and financial ladders. Moreover, male flight theory explains that as women begin entering previously occupied male occupations, men are more likely to leave because they fear a decline in status and potentially lower salaries; favouring the male worker, the female opportunity is thus restricted.

Moreover, within this vast realm of power, it’s also important to note that industry gatekeepers (mainly white cisgender males) have defined public tastes since the earliest inklings of food media. That said, pushing their own agendas, they have single-handedly created a society that is disinterested in female representation. Because consumers blindly digest media, tending not to question whether it is biased, this has led to a culture that appears to be indifferent to diversity, which is incredibly problematic.

While the odds have been stacked against females, things are starting to change with many women beginning to crack the crème brûlée ceiling. Since food culture isn’t gendered, that means there should be equity in opportunity. Thanks to social media, in particular, many women have been able to advocate for themselves and inspire others to spark discussions of equality. This has led to an increase in female representation spanning the foodscape. Women are writers (Ruth Reichl, Melissa Clark, Michelle Sorensen), activists (Tanya Fields, Michele Simon, Alice Waters), chefs (Carla Hall, Nigella Lawson, Lidia Bastianich), editors (Amanda Kludt, Maile Carpenter, Sarah Miller), podcasters (Danielle Nierenberg, Cynthia Graber, Nicola Twilley), farmers (Severine Fleming, Erika Allen, Mapaseka Dlamini) and photographers (Penny De Los Santos, Joanie Simon, Jackie Alpers)—the list goes on.

Ultimately, the perception that food is female is an ironic idea for society to hold onto, especially if women have been kept from proper recognition in food media for millennia. Lack of representation is a direct consequence of patriarchy, psychology and power that has not been challenged but needs to be addressed. It’s a massive blindspot in history that cannot be repeated. Half of the population is female, so when the female perspective isn’t acknowledged, half of history and half of culture are neglected, too. As a society, we must continue to work on highlighting the tremendous efforts, works and achievements in food that women have contributed, but also focus on creating equal opportunities and representation for all⁠—at the end of the day, there’s room for everyone at the table. 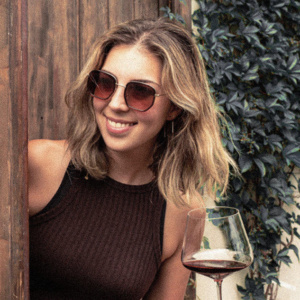 She recently graduated with a Master in Food Culture, Communication and Marketing. When she's not eating her way through the Italian landscape, you'll find her in the kitchen either writing about her gastronomic adventures or baking at midnight!