Can We Eat That? 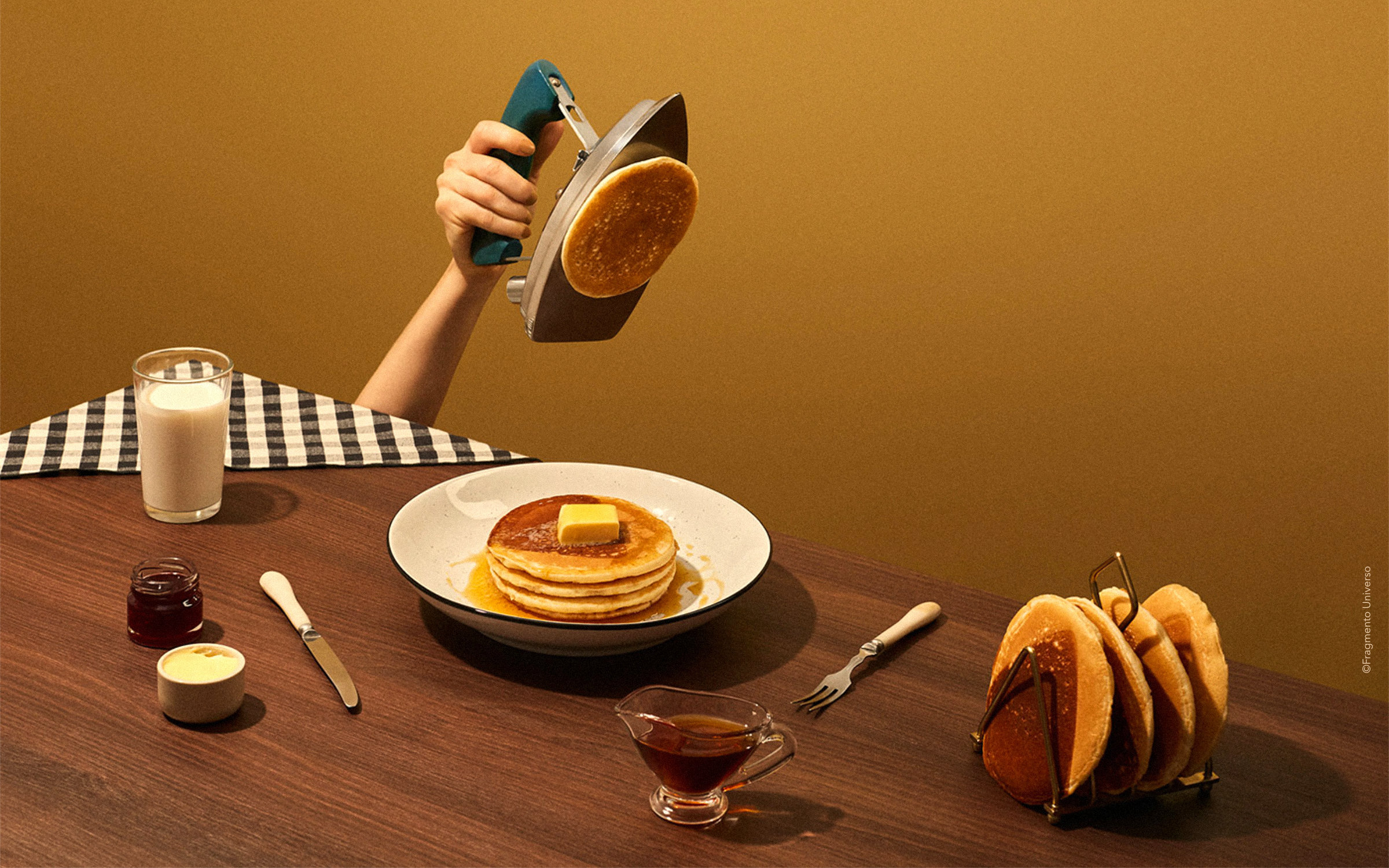 When I say I want to be a food designer, most people think I want to create beautiful dishes, the ones “you eat with your eyes first”. Well, that’s not what I mean. And yet, it’s not just my grandmother, who thinks that food design and cake design are the same job, but also people who are in contact with artistic or gastronomic fields, who know how complex the idea of food is. I don’t blame them. Explaining food design is hard. Though the concept is clear in my mind, due to a lack of terms, it is often confusing to share it with others.

Food design is becoming more popular by the day, google it, and you will find thousands of results about plating and designing beautiful dishes. That creates confusion. The word ‘food design’ is being used in a sense that it has nothing to do with plating, food photography, food styling and other similar subjects. The Domus Editor recently came out with its newest edition of “Il Cucchiaio d’Argento”, titled “Food Design: basi, tecniche, ricette” (eng. basics, techniques, recipes). I didn’t read the book, but the title and the index alone make it very clear that it talks about cooking, delicious recipes and how to plate them originally and gorgeously. The book “A Scuola di Food Design” has the same problem. As a beginner, it was the first book I read to try and learn more about food design and was presented with rules of balance on a plate, geometries, volumes, shapes. 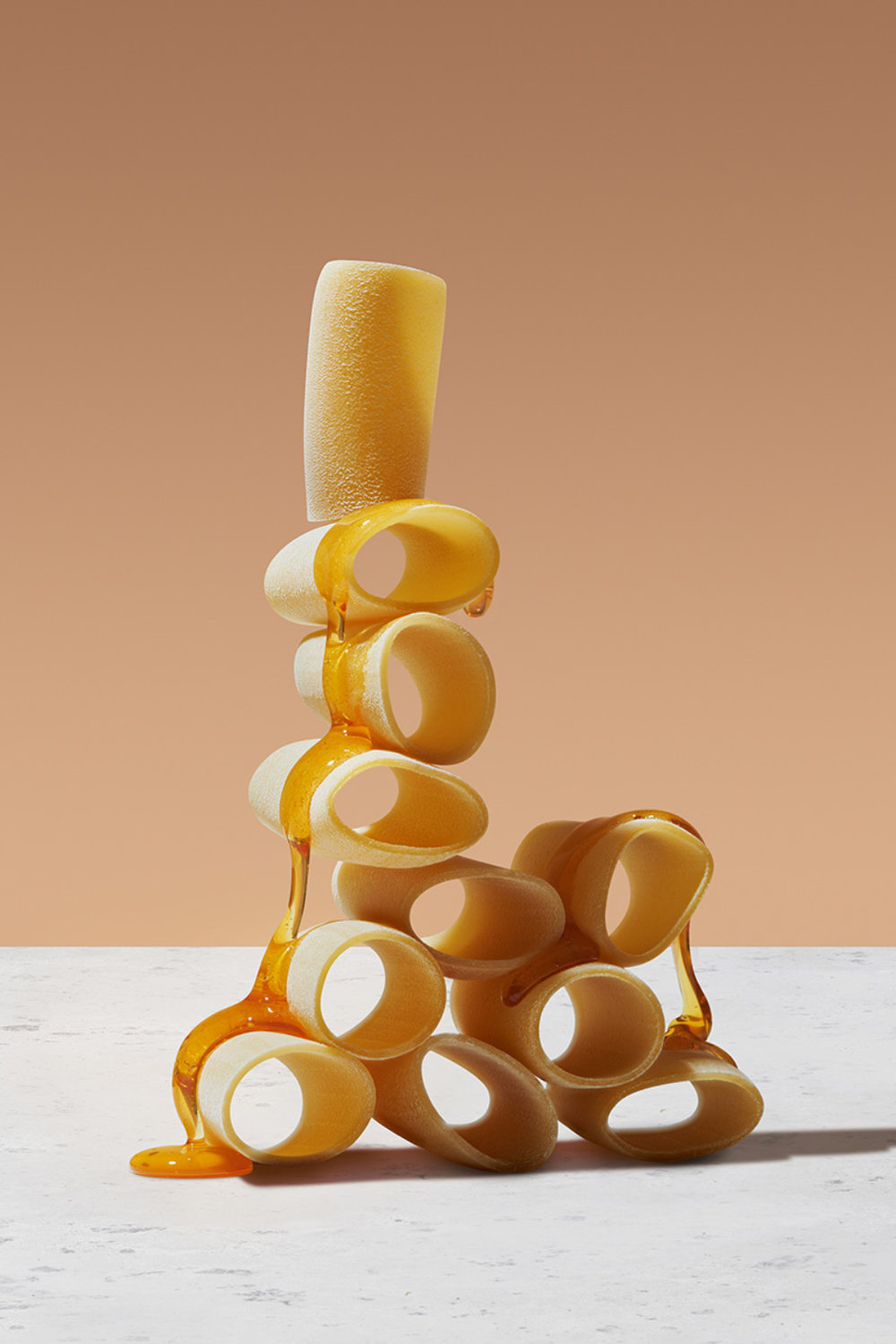 I am not saying that this is not an exciting and valuable topic. I just believe that the wrong use of terms often leads to misunderstandings. Maybe, instead of calling these practices food design, they should use “plate design” or “food styling”. Wouldn’t that make things easier? In this fight of names, the online course platform Domestika.org recently changed the name of one of their plating courses from ‘food design’ to ‘food styling’ – a small victory that was made possible also due to a warning by the designer Francesca Zampollo on her Instagram account. Yet, the problem is still here. 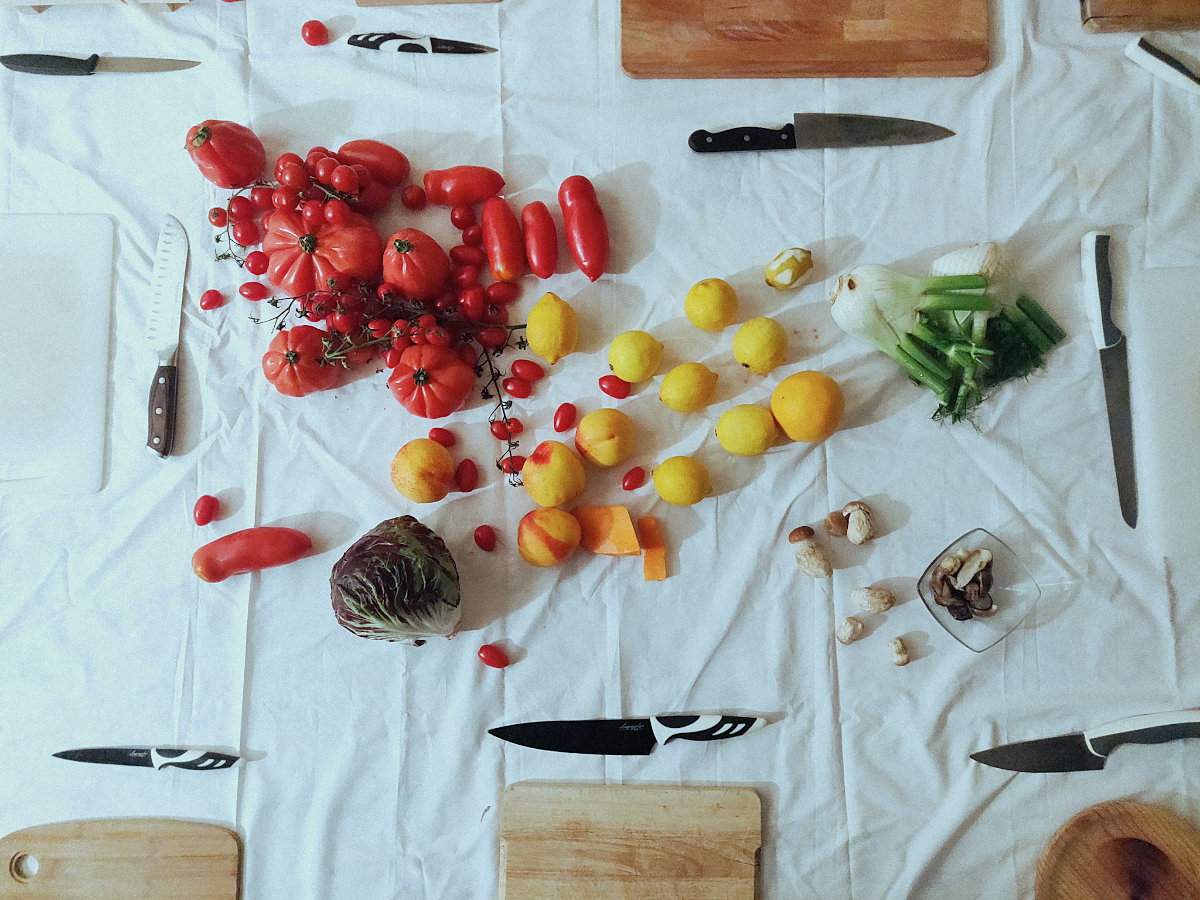 Let’s take some steps back. It was the year 1932 when the world of art started spreading the idea that food could be used outside the kitchen, or, at least, in a new, different and innovative way. Filippo Marinetti, leader of the Futurism artistic movement, published the first art project about this topic: The Futuristic Cookbook, a collection of recipes and diet suggestions with the purpose to shape a healthy body and futurist mindset that will be able to keep up with the fast rhythm of our time. For the first time, the cooking process moved from the private kitchen to a public domain, and food took on a new value, dissociated from a merely nutritional one. Marinetti designed a cookbook crossing different disciplines and introducing a multisensory approach. With this “crazy” and absolutely out of the box project, food art originated. Following the Futurists’ path, other artists started using food as an artistic medium in the years that followed. Salvador Dalí wrote Le Diners de Gala, the surrealist cookbook in which, through exotic flavours and elaborated dishes, food was met with sensuality and death. Afterwards, the Fluxus movement added the concepts of ephemeral and experience to these new combinations of art and food. According to their idea, art is the process of creation and is strictly related to everyday life. Allison Knowles expressed her vision of food art with the project ‘Make a Salad’, performed for the first time at London’s ICA Gallery in 1962. The event consisted of the preparation of a massive salad, the chopping of ingredients and a spectacular mixing performance, where everything was tossed in the air. Finally, the salad was served to the public. The performance was replicated numerous times all over the world. I even performed it at a private dinner with some fellow Master students, and it was a total success.

“For the first time, the cooking process moved from the private kitchen to a public domain, and food took on a new value, dissociated from a merely nutritional one.”

Long before Marinetti introduced food to the art field, the Industrial Revolution birthed what today is known as design. Until then, design, technical expertise and manufactory belonged to a craftsman’s skillset but, in 1750, the Industrial Revolution brought a new idea of technique, standardization and serial production to the playing field. The first definition of industrial design described it as “a creative activity whose aim is to determine the formal qualities of objects produced by industry” (Council of Societies of Industrial Design Congress). Today, it is considered as related also to small and artisanal production, but not only that. As a matter of fact, over time, design started to create more and more connections with new disciplines: from mere product design to graphic design, interior design, light design, user design, exhibition design, social design, service design, communication design and – of course – food design.

Design started to get into contact with the food world through newly-invented technologies that sped up production, improved preservation and guaranteed a faster distribution. Food engineering and food design overlapped in this framework. Exploiting visual and narrative aspects, design contributed via packaging, aiming to contain, preserve, transport, store and exhibit food products. However, this relationship was purely of industrial nature. As a consequence of the new political movements favouring a smaller and more sustainable production, new professional figures with better analytic capacities were required to design new products and new food experiences. The purpose was to redefine a new balance between production and consumption, using creativity. This new vision of the relation between design and food marks the beginning of food design as we know it today.

One of the first significant moments of food design was when Martí Guixé exhibited his project SPAMT in the Galeria H2O Barcelona – a combination of traditional Catalan bread with spread tomato and industrial food. Guixé adapted the dish to the contemporary needs of society and considered food as an “edible and designed product, an object that negates any reference to cooking, tradition and gastronomy”. In his book, Food Designing, he declares clearly that a chef, a food engineer, or an artisan are not food designers. Neither does he define himself as such: “Martí Guixé is a general designer who comes to food design with the idea of widening design’s frontiers”. Food design is not cooking or nutrition because “it gives visibility to the different functions associated with eating in contemporary societies.” Nevertheless, it is complementary with these other disciplines. 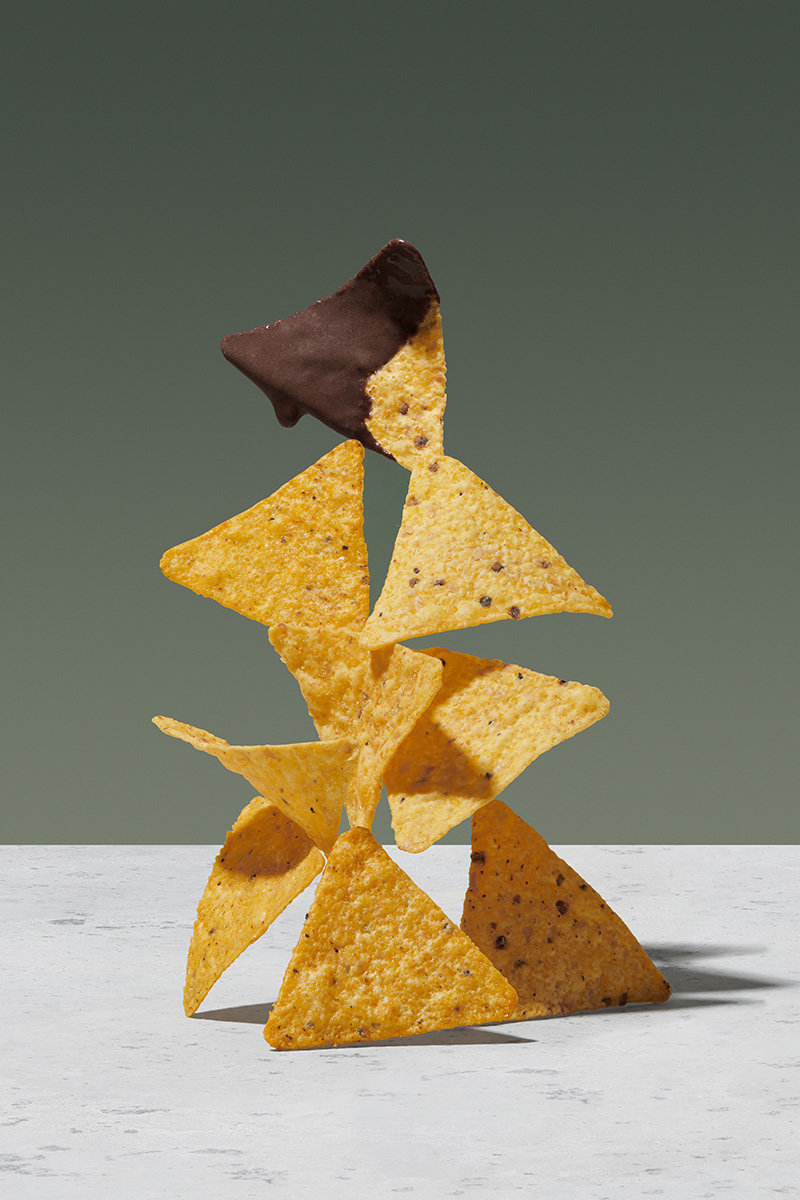 While Guixé refuses the label, Katjia Guijters chose the title ‘food designer’ from the beginning. She defines food as a complex subject related to fundamental issues like waste, obesity, and climate change. Her work is based on creating different views on food in order to contribute to change: “I tell stories with food” is what she answers whoever asks her what a food designer does. Another pioneer is Marije Vogelzang, who works with the acts of eating, and, therefore, named herself the first eating designer or better “The Grand Dame of Eating Design”. On her website, she writes: “Food is a conductor, an amplifier of thought, creator of new perspectives”.

Nowadays, the number of professionals who work with food is increasing, and each of them is doing it focusing on the topics they feel most connected to. That allows them to deal with all the numerous shapes of food and its issues. Emilie Baltz creates immersive multisensory experiences, focusing her work on the five senses, as well as Bompas & Parr, a multisensory experience design studio. Numerous others, instead, work with the future in mind, designing futuristic speculative projects that want to predict what will happen and propose alternatives to the future that seems to await us. Chloé Rutzerveld is one of them, as well as the Next Nature Network, a multidisciplinary team that explores ways of living in the next nature.

“Food design concerns different disciplines; it has a narrative, communicates values, and raises awareness. It can occur in different shapes, from massive production to installations and performances, events, experiences, and dinners…”

These are just some of the numerous professionals that chose food as a tool to effect change. Among them are not just designers but also artists. As a matter of fact, food design and food art are strictly related. Their distinction is subtle, sometimes even completely absent. If we try to find the differentiating element, it could be in the process of creation. As a design process, food design usually follows design thinking, a research approach that identifies opportunities for finding solutions, always prioritizing creativity. Moreover, while a food artist wants to provoke a dialogue using food as a concept and a symbol, the designer also needs a context in which to create their story. Nevertheless, since the two often aim to achieve the same goals, I don’t believe it is fundamental to draw a separating line.

Instead, it is important to distinguish food design from purely aesthetic disciplines and start using terms properly. It is not about cooking or creating beautiful dishes; it is “a discipline which is far wider, deeper and holistic than food styling” (Francesca Zampollo). Food design concerns different disciplines; it has a narrative, communicates values, and raises awareness. It can occur in different shapes, from massive production to installations and performances, events, experiences, and dinners… 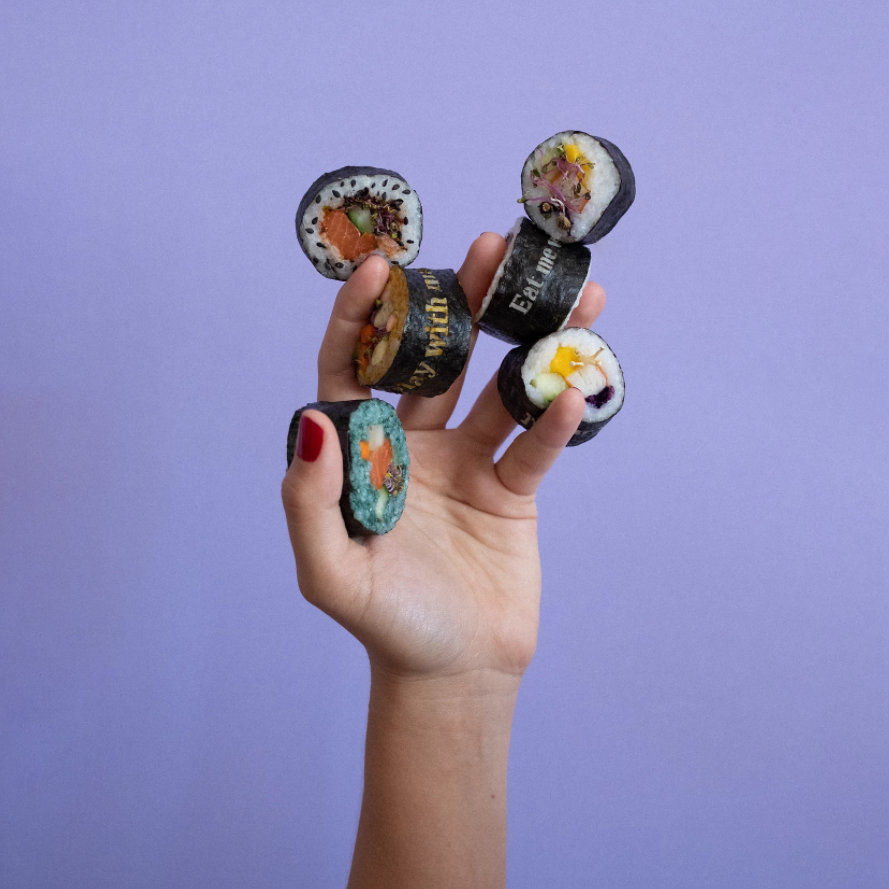 For me, food design represents an opportunity to trigger thoughts and to start discussions about fundamental issues that concern us and our life on this planet. Food is not simply edible products; it carries stories and values. Therefore, when eating it, we get in touch with all of them. Living beings constantly interact with food. It enters and changes our bodies, creating a personal and strong relationship and making food one of the most powerful tools. In my future job, I want to use food as a medium through which to communicate, tell stories, and raise awareness. To make that happen, one cannot miss the main characteristic of food: interaction.

The discipline of food design has suffered a million and one misunderstandings over the years. Let’s change that; let’s stop using words and terms carelessly and start talking about food design properly. I hope this article gave you an idea of how to do just that and what to answer the next time someone asks you: “What exactly is food design?” 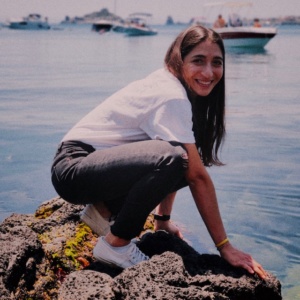 She is about to graduate with a Master's Degree in Creativity, Ecology and Education from the University of Gastronomic Sciences. She has an interior design background, but her passions are multiple and linking them is one of her natural skills. From here comes the bridge between food and design and the interest in the concept of interaction. Her mission as a food designer is to trigger thoughts, create connections and raise awareness using food and creativity. She is currently working on a project about meat consumption.