Feast: Food of the Islamic World

A Review of Anissa Helou’s Ninth and Newest Cookbook

Anissa Helou’s ninth and newest cookbook, Feast: Food of the Islamic World, is unlike other cookbooks. Rather than focus on a single region, Helou ambitiously tackles the entire cuisine of diverse Islamic communities around the globe. There are 529 pages and more than 300 recipes, plus a detailed world map and an introduction that includes a brief, yet informative, history lesson. Feast is like a set of nesting dolls, with each section of the book revealing another whole book inside it. The cookbook costs $60.00, roughly double the price of most cookbooks sold in the United States, but given the immense amount of content packed in, it’s a bargain.

I am a cookbook writer and recipe developer, so I read the acknowledgments of a cookbook before I even glance at any other page. I look for an obvious collaborative spirit among author, photographer, editor, and designer, a quality that makes for the best books. The acknowledgements can be a lovely introduction to the talented cast of characters who worked so hard to bring a book to life. On the other hand, a sparse or terse acknowledgement can indicate that a book was hastily put together. You can learn a surprising amount of information from reading it.

In Feast, the acknowledgments, a total of four pages and that’s dense with names—demonstrates  the extent to which Helou researched and traveled for this cookbook. She thanks people who helped her in Oman, Zanzibar, the United Arab Emirates, India, Pakistan, Indonesia, China, Turkey, Lebanon, Qatar, Iran, Senegal, and Morocco, plus London and Oakland, California (where the recipes were tested by Amy Dencler, who is a chef at Chez Panisse restaurant). 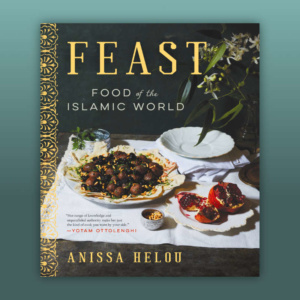 See how much you learned? That last nugget of information about recipe testing is particularly interesting because now you know that the recipes in Feast originally came from far-flung cities of the Islamic world, but were also cooked and tested in an American kitchen before being published for an American audience. This is your first clue that these recipes might reliably turn out well in your own home.

I put a few recipes to the test. First, I made jeweled rice, a celebratory Iranian dish named for the special jewel-like ingredients added to the rice: barberries, dried currants, slivered almonds, and a good pinch of saffron threads. When I started cooking around 4:30pm, I figured I’d be done in no time and we’d have an early dinner. Three hours later, with no end in sight, my husband, Graham, made the gentle suggestion that we could perhaps phone in a takeout order of pot stickers and beef and broccoli. Somewhat defeated yet admittedly hungry, I paused at one of the many good stopping points in the recipe.

After dinner, I picked up where I had left off and, just before bed that night, we ate a savory dessert of jeweled rice, steaming hot straight out of the pan. The rest of the rice went into the refrigerator and we enjoyed it for days in various ways—warmed through and served alongside grilled chicken, fried in olive oil in a hot skillet until golden brown and crisp, and even chilled and topped with wedges of soft-boiled egg. There had to have been at least twelve servings of rice, although the recipe says, “serves 6 to 8.”

Next, I followed the recipe for tabbouleh. In the headnote, Helou sets the record straight on the proper amount of bulgur in tabbouleh. “It is an herbs and tomato salad,” she writes, “not a grain salad.” As someone who is embarrassingly guilty of this misstep, I loved being schooled by Helou and I’ll forever remember her admonition. She also insists, rather emphatically, that the herbs must be chopped by hand.

It took me more than hour to do so, but by the end of all that hard work I had a mountain of the best tabbouleh I’ve ever tasted. This recipe yield line reads “serves 4 to 6,” but I would argue it’s got to be at least twice that in reality. A pattern was emerging: both of the recipes I tried required a significant amount of time in the kitchen and yielded twice as much as promised, but were astonishingly delicious.

I flipped through the sweets chapter and was tempted by semolina cake, Ramadan date cookies, pistachio ice cream, and many others, ultimately settling on baklava. Graham is half Lebanese and he adores baklava—his family calls it baklawa, pronounced but-LAY-wee—so together we followed the recipe, carefully buttering paper-thin sheets of filo dough and layering them over crushed pistachios.

It happened to be the Fourth of July and we carried the entire baking dish of cut diamonds, fragrant and glistening with orange blossom syrup, to a friend’s house for a backyard barbecue, which felt like an ironic albeit fitting way to celebrate the American holiday. Every single piece of baklava was eaten, even the flaky crumbs.

Anissa Helou’s Feast is a beautiful reminder of how vast our world is and how many tasty foods there are to try. I’m glad to have this new book on my shelves because there’s nothing else quite like it. Feast is more than just a cookbook; it’s a reference I will turn to when I need to know what distinguishes Moroccan kefta from Lebanese kafta, or how to properly shape spinach-stuffed fatayer, or when to add preserved lemon to chicken tagine.

At first, I was a little surprised by how time-consuming the recipes were and by how many servings they made, but the more I thought about these qualities, the more I grew to appreciate them. Why was I so bothered by the bigger than expected yield? Weren’t the hours in the kitchen time well spent, especially if they meant nourishing not just myself, but also my friends?

Of course, sometimes we cook when we just really need to eat, but other times, we follow recipes and techniques as a way to connect with people around the world. We share food we’ve made as a way to build our communities and to foster mutual understanding. We feast with great hope for the future. 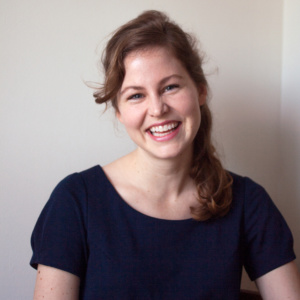 She's an alumna of the University of Gastronomic Sciences and works as a cookbook writer and recipe developer. She was named by Forbes as one of the most influential people under 30 in the world of food and drink. She has co-authored numerous award-winning cookbooks, most recently Tartine All Day, Everything I Want to Eat, and This Is Camino. Her first solo cookbook, The Newlywed Table, was published on April 2, 2019. She lives in Berkeley, California, with her husband, Graham Bradley.