Of the 100 most recent pictures on my cell phone, 57 are of food or wine and another ten are of ingredients or scenes containing food or drink. What explains my impulse to photograph so much of what I am about to eat? Why has photographing our food become a ubiquitous feature of our eating culture and what are the consequences of this habit for our sense of aesthetics and experiences of pleasure?

The Temporal Shape of Sense Experience

Before examining our current, intensely optical relationship to food, it is worth reflecting on how we experience taste-pleasure more generally. Although we may disagree with Kant’s hierarchy of the senses—which descends from sight, through hearing, touch, and smell, to taste—there are differences in the nature of the senses. It’s fair to say that taste has a distinctly proximal quality while vision is a distal sense. Whereas sight refers us to the external world, taste is what we experience as we internalize part of that world through eating. This act of incorporation or internalization binds subject and object in a way that seeing, hearing, and even touching cannot.

The time of the pleasure that we experience via taste is distinctly different from the time of visual or auditory pleasure: taste-pleasure is a bodily pleasure that dislodges us momentarily from the coordinates of our temporal reality and thrusts us into the vertical dimension of time that is the event. The eventitude of haptic pleasure is in contrast to the distanced, reflective pleasure (no less pleasing) of looking at a painting, listening to music, or watching a film.

Optic pleasure is characterized by duration along the horizontal dimension of time as subject and object move past one another and remain separate. Obviously, haptic pleasure has duration and optic pleasure can have an eventful character: the distinction is not absolute. However, the potential for an optic sense experience to be recorded (and thus reproduced) makes its temporal shape different from that of a haptic sense experience, both during the moment of the experience and in our ability to relate and recollect it.

One of the reasons for obsessively photographing our food is that having a visual record of what we assume/expect/anticipate will be a pleasing taste experience allows us to stretch the horizontal dimension of our enjoyment, adding (potentially unlimited) duration to the experience. But there is a cost to this kind of optic food preservation: what we gain in terms of our ability to access the experience later on when we look back at the picture, we lose in terms of the immediacy of the taste experience during the event itself because, even if we never in fact look at the picture, we have established a coordinate on the horizontal axis of experience and this makes it more difficult to rise into the vertical dimension of pure taste-pleasure.

Thus, the displacement here is twofold: on the one had, we displace (part of) the experience into a future moment when we may wish to recollect or relate it; on the other hand, and simultaneously, we displace (i.e. pay the cost with) part of the pleasure that we could have had in submitting to the immediacy of the haptic pleasure experience itself, which defies recollection. Whatever pleasure we may experience in the actual eating will, in some way, be measured against—and perhaps fall short of—the anticipation of pleasure that prompted us to pull out our smartphone in the first place.

If “the image is the mode in which pleasure as a sensory input takes shape” (Perullo 2016, 35), then photographing our food is, perhaps, an attempt to fix or give a shape to the taste experience, which is so hard to recall and relate after the fact. This is really about prolonging and pocketing a piece of the pleasure. It’s about “[placing] the copy of the original in situations which the original itself cannot attain” (Benjamin 2008, 21), not merely because of its physical perishability, but because the experience (eating) that we are trying to copy is one that necessarily destroys the very thing being experienced (the food). Why do we do this?

The smartphone is the new mirror, as the selfie can attest. Beyond serving as a mirror for each of us individually (as in traditional narcissism), this new mirror is one that we pose in front of fully aware—indeed, this awareness motivates the performance—that we have an audience. This mirror need not reflect the face of the experiencing subject; it can just as easily reveal the presence of the subject via the object of the experience. The picture that I take of my food is really a self-portrait, hence the subtitle of Signe Rousseau’s book Food and Social Media: You Are What You Tweet (2012).

This autovoyeurism-cum-exhibitionism characterizes a “‘digital narcissism’” (Andrew Keen quoted in Rousseau 2012, 36) that derives its unique character from being structured by an external witness. The actual presence of this witness is incidental, for the experiencing/photographing subject takes the picture with a view toward the future possibility of a witness, maybe the photographer himself: we begin to experience a meal as what will have been.

Why is there a need for such a witness? Because the exhibitionist impulse has changed pleasure into something that cannot be fully realized unless it is shown to the outside world and validated by having been witnessed. The other person, who has to see (or taste, even if only optically) our experience in order for that experience to become real to us, establishes a coordinate on the horizontal axis, giving breadth to an event (of taste-pleasure) that, as purely vertical, would only have registered as a point of intersection, infinitely narrow, on the axis of our durational reality.

Whether the need to display our experiences necessarily diminishes their depth (i.e. their vertical magnitude) is a question for another time, though my suspicion is that it does, since the sharing that defines conviviality has been (at least partially) supplanted by a display that relies on the witness being absent from the event to be displayed. After all, it’s not as if we leave our phones in our pockets when we dine with other people—in fact, paradoxically, the immediate presence of the other person disqualifies them from being a suitable witness. Photographing our food together before eating has become a ritual akin to saying grace (or even just “buon appetito”).

Once we acquire the habit of displaying even the most mundane experiences, we start to pursue the pleasure in these experiences as something to be collected; and the more we collect, the more our pleasure fades. We find it ever more difficult to submit to the pleasure of the taste experience in the company of others whose subjectivity subordinates the “I” to the shared pleasure itself.

It is in the moments when duration, measurement, and intellect fade away that we become our most objective about the pleasure of taste, for we become the mirror, the object that reflects (even if—indeed, precisely because—in that moment we cannot reflect upon) pleasure. In our manic preoccupation with our own subjectivity we do whatever we can to reinforce the “I,” and one of the easiest ways to do this is through an-other’s eye: “Look at me! Watch me eat! Doesn’t it look delicious!” This childish solipsism is eroding our capacity for the mature mode of conviviality.

The insatiable need to record our experiences is less about the future possibility of a pleasant recollection than about collection for its own sake. We collect dishes, meals, restaurants, wines, and even chefs. This collection involves two related phenomena: accessing signatures and accumulating “culinary capital” (Naccarato & Lebesco 2012). We begin by photographing beautifully presented dishes in the high-end restaurants of celebrity chefs to claim a place among those with access, knowledge, and discernment (i.e. “good taste”). This is fundamentally about claiming and collecting the signatures of the very authors who grant good taste its authority.

Soon this behavior turns into a drive to become the authors of our own experiences and good taste—it turns into a competition for culinary capital. We begin to perceive that the chef, a kind of “cultural intermediary” (Bourdieu’s concept, expanded upon in Mentinis 2016), is not only someone who democratizes good taste, but someone who maintains their privileged position and authority by dictating the terms of the discussion: as long as culinary capital, in the form of good taste, can be handed down by the chef, it cannot be democratic, and so we race to accumulate culinary capital and become authors ourselves.

“The distinction between author and public [has lost] its axiomatic character” (Benjamin 2008, 33-4). Because this treadmill feeds itself (i.e. remains perpetually hungry), our position in the race is not determined by what we have collected but by how much: “quantity has been transformed into quality” (Benjamin 2008, 39). Almost any image will suffice, hence the tendency to photograph and display even the dishes that we ourselves (as the new authors) have prepared—again, the selfie.

If, in the case of sexuality, we picture ourselves from a disembodied perspective while in the midst of a sexual encounter, measuring the “reality” of the scene against a fantasy that pornography has provided, then in the case of eating we approach food itself optically, from the perspective of a lens. Just as, even while still engaged in a sexual act, we begin to formulate a narrative of the event to relate to someone else later on (again, we have to tell somebody about it to make it real), we also tend to think about food in terms of how we will display it visually, even while we are still in the act of eating!

The fantasy or simulation has become the reference point for evaluating the veracity and quality of reality. It certainly seems that “aestheticized images of unattainable gratification [have replaced] actual food” (Mentinis 2016, 20). Fantasy has dematerialized food such that the photograph is now our only tool for capturing the materiality of the bodily pleasure of eating. This situation leaves us aesthetically, socially, and spiritually malnourished: we must (re)commit ourselves to the here and now of haptic pleasure, a pleasure worth seeking on its own terms.

5.Rousseau, Signe. 2012. Food and Social Media: You Are What You Tweet. Plymouth, UK: Altamira Press

6.Zizek, Slavoj in The Pervert’s Guide to Cinema. 2006. Directed by Sophie Fiennes. 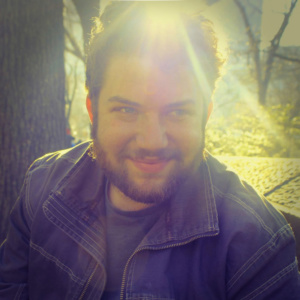 He studied anthropology and then worked as a butcher and vegetable farmer in his home state of Vermont, USA, before attending a Master program at the University of Gastronomic Sciences. He currently works on the Ark of Taste project at Slow Food. Charles is interested in philosophy, Miles Davis, wine, pigs and pork, and the link between traditional agriculture and biodiversity.