A Story of Collective Healing

Growing up, I ate a hodgepodge of foods. Chicken nuggets and dim sum. Baked lasagnas and grilled eggplant with fish sauce. Quesadillas and pan-fried quail. Of the variety of dishes that made up my childhood memories, I had one favorite: chả giò. More commonly known as fried spring rolls, this Vietnamese restaurant staple, was always served at birthday parties and on weekends that my mother would randomly deem worthy of such an amazing treat.

And although my mother’s chả giò were delicious, only one woman reigned supreme when it came to that crunchy, succulent snack: my grandmother.

Each family event saw all of us going to her house in Oakland. Upon arrival, the men would retreat to the back to barbecue thịt nướng for bún chả Hà Nội, and the women would go to the kitchen to help my grandmother with everything else. 1 For hours, they would meticulously roll chả giò after chả giò, filling aluminium party trays that would go into a fridge in the garage to chill before being batch-fried.

I was nine when my grandmother taught me how to carefully wet and wrap the rice paper parcels. But still the magic of them eluded me.

The secret, everyone said, was in her filling. A mix of ground pork, crab meat, rice vermicelli, rehydrated wood ear mushrooms, julienned carrots and jicama coming together to become the perfect counterpart to the crispy outer shell and the accompanying nước mắm châm.

My family was not the only one to discover the magic of my grandmother’s spring rolls, however. After immigrating to the US as Vietnam War refugees and being placed in Phoenix, Arizona, my grandparents were surprised to discover that their new neighbor was a member of the local motorcycle club.

For months he would bully my grandfather, throw cigarette butts into their front lawn, and have parties that would keep the whole family awake until the early morning, but it wasn’t until the day this man pushed my Uncle Chien out of his way that my grandmother took action.

Grabbing a cleaver from her kitchen, my 4’9” floral-silk-set-clad grandmother chased this towering, tattooed man around the cul-de-sac, and thus a new relationship of mutual respect was born. No longer was there litter in the yard and my grandfather now had a way to get to work that was quicker than the bus: on the back of a Harley Davidson.

“And although my mother’s chả giò were delicious, only one woman reigned supreme when it came to that crunchy, succulent snack: my grandmother.”

And in return, their neighbor could now expect a batch of my grandmother’s fried spring rolls whenever she decided to make them.

Decades later, when my grandmother passed away in 2016, we were surprised to see a card from Phoenix amongst the sympathy wishes. “I was saddened to hear that Minh Lien had passed. My sympathy with you and your family. I know that we’ll both miss her and her egg rolls – Richard Farraway”

And although my family all laughed when we read the postscript, we had no idea how right he was. My grandmother’s passing left a fracture in my family that we hadn’t felt since my grandfather and Uncle Chien’s passing six years earlier.

For the women in my family, this pain was keenly felt.

Without her, the kitchen felt empty. Silent, without her quick remarks and commentary on our ability (or sometimes, lack thereof) to recreate the dishes she knew so well.

So for months we avoided making the dishes she taught us to make. Bánh canh.2 Bò kho.3 Bún gà cà ri.4 Pâté chaud.5

The summer after my grandmother passed, my mother, sister and I finally decided to go through the boxes of clothes that had sat in her old bedroom since the funeral. And upon opening a box of knit sweaters and skeins of yarn, we discovered something that felt like the biggest gift she could have left us in lieu of her presence. No, not hand-written recipes. Cognac.

“And upon opening a box of knit sweaters and skeins of yarn, we discovered something that felt like the biggest gift she could have left us in lieu of her presence. No, not hand-written recipes. Cognac.”

Three bottles of Hennessy XO, with one partially opened.

You see, my grandmother loved cognac. She taught her daughters how to drink it. Neat. No ice.

And at all the family parties of my childhood, the women of my family would each enjoy a glass (or share one depending on their alcohol tolerance) while cooking and gossiping and catching each other up on what they bought at the most recent Loehmann’s sale.

That night, after imbibing a glass each, my mother, sister, and I called up the aunties and the cousins for a chả giò weekend.

To prep for the impending gathering, my mother made her own recipe for filling, adding shrimp meat in addition to the crab and ground pork, as well as yellow onions.

“It’s more flavorful,” she argued, closing a four-quart Pyrex bowl, before putting it in the fridge.

Gathering into my aunt’s kitchen, we pulled out pack after pack of rice paper. Each one of us having our own favored brand.

“That night, after imbibing a glass each, my mother, sister, and I called up the aunties and the cousins for a chả giò weekend.”

And as we passed around the glasses and began taking our first sips — the smooth burn sliding away to reveal the caramel and vanilla flavors — we began to roll.

Scooping out tablespoon-sized scoops of filling, we molded them into small mounds in our hands before laying them out onto a sheet of rice paper. Carefully folding the bottom of the sheet away and over the filling, before tucking each side in so that none of the meat and vegetable mixture would fall out and into the frying oil, we began to talk.

About Vietnam. About my grandmother. About what we would do for her 100-day ceremony and what food should be served.6 We all agreed on chả giò.

Without using any tablespoon or measuring cup, we did what my grandmother and what so many other Vietnamese women had always done: lived in the “world without measurements.”7

And as we carefully rolled, tucked, smoothed, and pressed the rice paper parcels, and took sip after sip of Hennessy, something shifted in us. The routine of making fried spring rolls, as we had done before so many times in my grandmother’s kitchen, had sealed the fractures in our memory and repaired the breaks in our hearts.

My grandmother was a unique woman — a fiery, headstrong woman — who left behind a sea of equally fiery, headstrong, and compassionate women. But through sealing the rolls with cognac and tasting the even crispier results, the women in my family were truly able to heal, let go, and see that our grandmother is still with all of us.

1. Thịt nướng is grilled pork patties and bún chả Hà Nội is a dish of pork laid over a bed of butterhead lettuce leaves and rice noodles, served with herbs, nước mắm, and cucumbers.

4. Yellow chicken curry with carrots, potatoes, and sweet potatoes. With a thinner consistency and generous topping of herbs, this curry is served with rice noodles.

5. Also known as patê sô, this Vietnamese puff pastry is filled with a mix of ground pork, pate, and minced onions.

6. In Vietnamese culture, a 100-day ceremony takes place 100 days after a person’s passing, and is used to celebrate tốt khốc and marks the end of the grieving period.

7. Quote from Stealing Buddha’s Dinner (2008) by Bich Minh Nguyen, a memoir about growing up in Grand Rapids, Michigan, and coming to discover a new American foodscape. Published by Penguin Books. 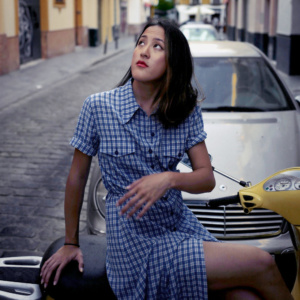 She is a recent graduate of the Master of Gastronomy program focusing on World Food Cultures and Mobility. She was born and raised in the San Francisco-Bay Area. Her past experience includes work as a community organizer, writer, and editor, and her writing interests include intersectionality, decolonizing foodways, Vietnamese diaspora and identity, and emotional labour.