Clams, tomatoes, fish, corn, octopus, sweet potatoes, sea urchin— the wide variety of ingredients that a ceviche could embrace might seem strange, but understanding the versatility of a dish that crosses all of Latin America, from the Sierra Madre mountains of Mexico down to the southern Andes of Chile, makes the ingredients of ceviche not too far-fetched.

So, what is ceviche? A sort of fish salad, fresh and satiating at the same time. Simply explained, it’s a dish made of small cubes of raw fish mixed with onions and lemon juice, but at the beginning, it wasn’t like this. Some historians claim that ceviche originated on the northern coast of what today is Peru— even before the Inca Empire! And instead of using lemons, these early forms of ceviche were originally made with ‘tumbo’, a native citrus fruit from the central Andes. Later the Spanish conquerors brought lemons and onions to South America, which began to supplement the addition of tumbo in ceviche. And apparently along with the Spanish language, some recipes like ceviche and empanadas continued to spread throughout most Latin American countries. 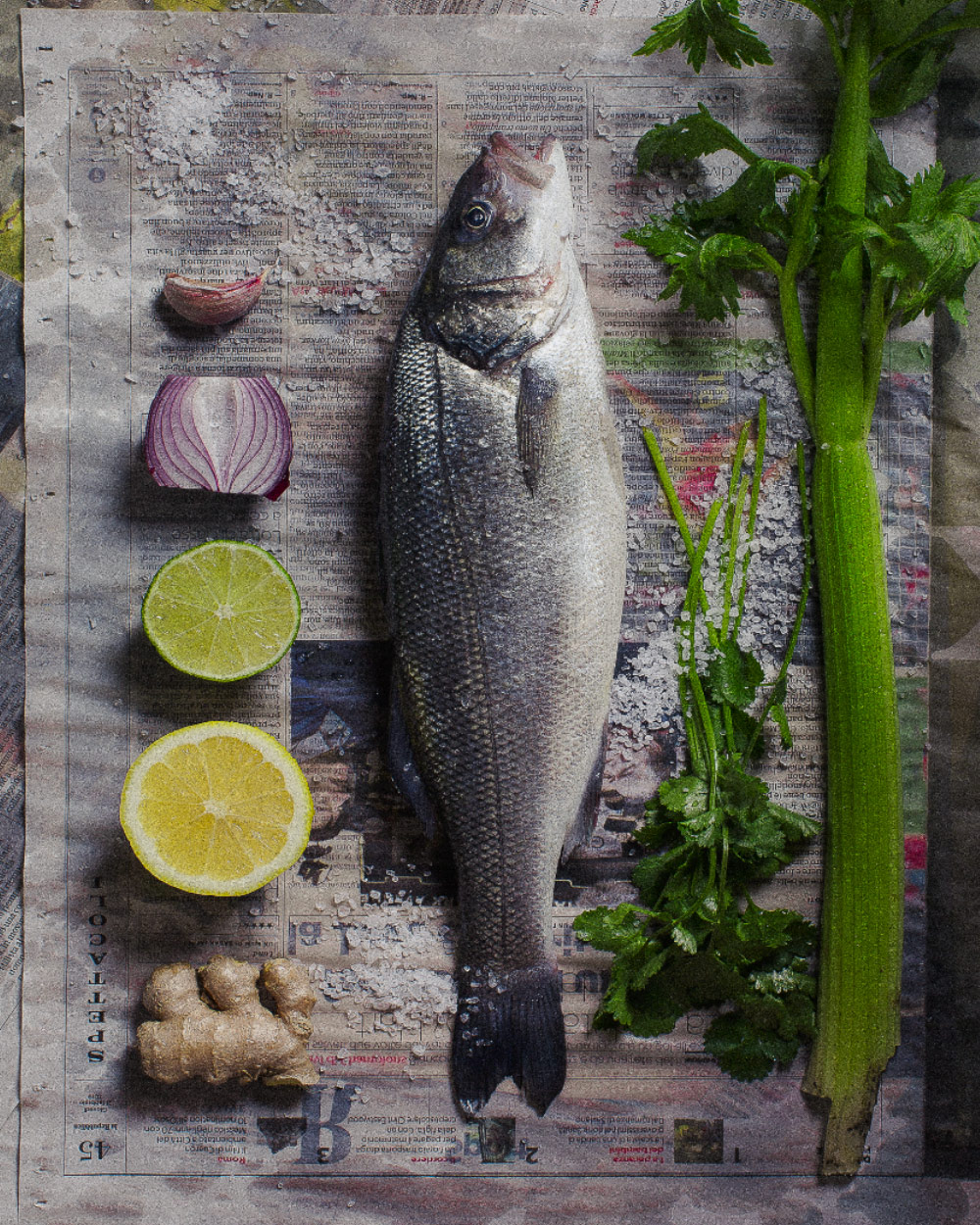 Of chemistry and other demons

Currently, some countries use shrimp or octopus as a base for ceviche, always cooked, so the addition of lemon juice doesn’t change the final texture of the dish. But for ceviche prepared with raw fish, it is a completely different story. The delicate raw fish flesh is very susceptible to change when it’s mixed with lemon juice. In Chile, if you make ceviche at home traditionally it is assembled hours or even days before eating. In this way, the flesh is marinated in lemon juice to “cook” the fish. But wait! There is not a fire involved in this type of cooking, even though the final product resembles fish cooked by the heat of a fire. What really happens is a denaturation of proteins, otherwise known as a change in the structure of a protein.

In a, let’s say “normal kitchen,” denaturation happens for two reasons: a change in temperature or change in the pH of a dish to manipulate the proteins. Denaturation can be both reversible or irreversible, but using lemons to start the process of denaturation is irreversible. So what happens? The acidity of the lemon juice breaks all the ionic bonds, which depend on the interaction of positive and negative charges. Acids have a positive charge which disrupts the balance of all of the interactions between the positive and negative ions within proteins, specifically in the tertiary and quaternary structure. This makes the fish appear to be cooked by the use of fire, but it’s not.

“But wait! There is not a fire involved in this type of cooking, even though the final product resembles fish cooked by the heat of a fire. What really happens is a denaturation of proteins, otherwise known as a change in the structure of a protein.”

Origin of the word

There are two main theories about where the word ceviche comes from. One theory proposes that the word derives from an Arabic language mixed with romance dialects. The word “iskebêch,” that became “escabeche” in Spanish, means “cooked in vinegar.” So for Spanish speakers, “escabechar” became a verb that means to marinate something in vinegar. The other theory is that the origin is from “siwichi,” which means tender/fresh fish in Quechua, the language of a group of indigenous that inhabit Northern Chile and Argentina all the way up to southern Colombia. Linguistics could give us clues to how the recipe and general idea of ceviche traveled in South America, but for now, we can save this investigation for later and focus on the various ways to eat ceviche. 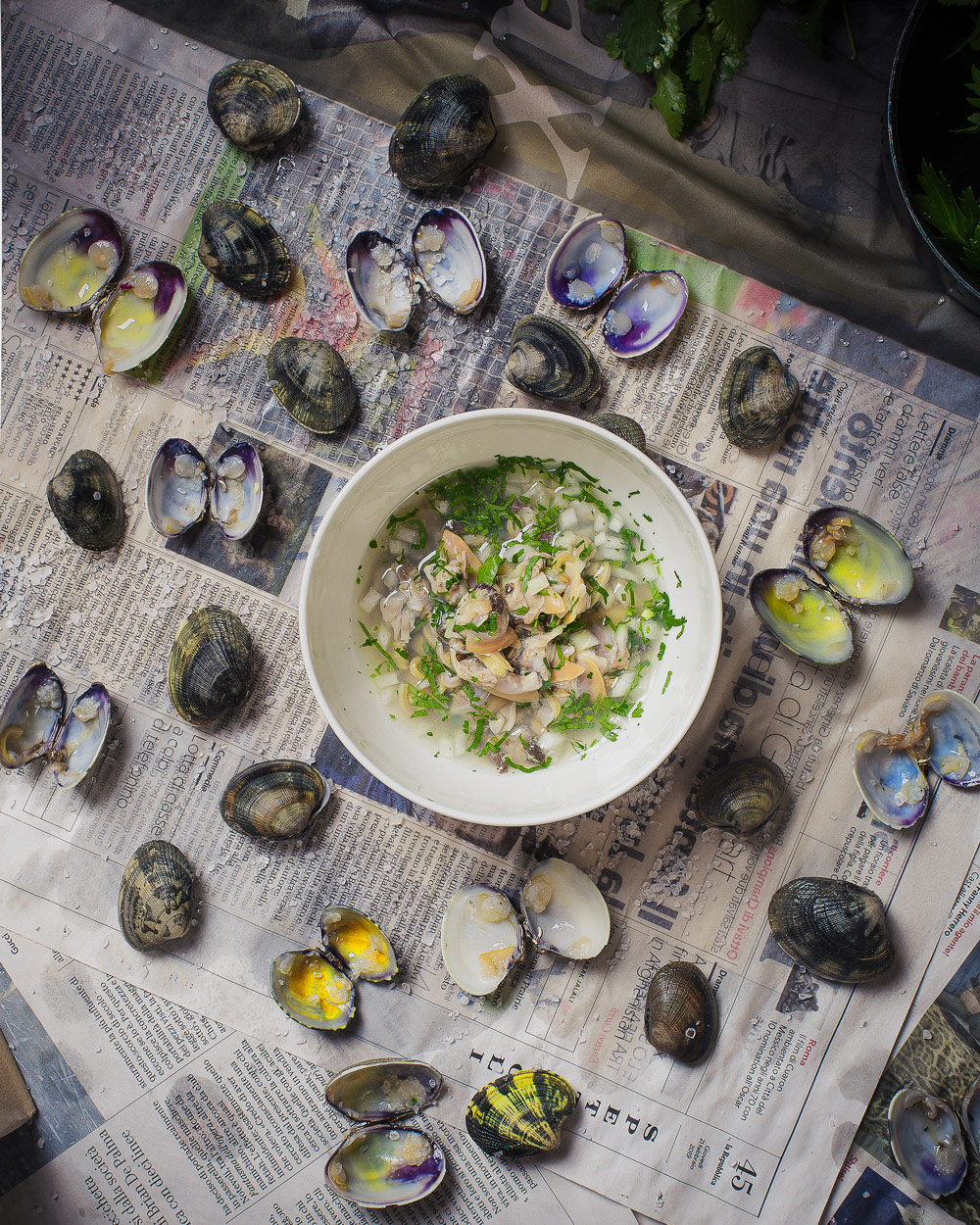 In Peru, there are places called “cevicherías,” where ceviches and other seafood dishes are sold. In these places, ceviche will always be served with “cancha”, a crunchy fried salty corn, which balances the freshness and the textures. They might garnish the ceviche with “camote” or “batata”, an orange sweet potato, which serves to balance the acidity of the dish. Then there are other ingredients that ceviche cannot miss: coriander, red onions and chilli peppers. Peruvian cevicherías also make something called “leche de tigre” (tiger’s milk) which is a liquid made with lime juice, red onion, celery, chilli peppers, coriander and pieces of fresh fish. It can be slightly ground in a mortar or blender and then strained. The idea of the leche de tigre is to season the fish, and also to have something that you can drink. Peruvians even promise that leche de tigre is a cure for a hangover (I agree!) and/or functions as an aphrodisiac.

In Chile, ceviche can be found in “caletas”, a small, artisanal port with a market or directly from the fishermen. There you can also find ceviches with different kinds of raw shellfish like mussels, sea urchin, clams and piure, a sort of seafood with a strong iodine flavor. Because this kind of Chilean ceviche is prepared in a very simple place, it is humbly accompanied by lemon juice, white onions and coriander.

“The idea of the leche de tigre is to season the fish, and also to have something that you can drink. Peruvians even promise that leche de tigre is a cure for a hangover (I agree!) and/or functions as an aphrodisiac.“

Ceviche is controversial throughout Latin America. In Peru, it represents national and cultural heritage, but today many unique variations of ceviche are found in most Latin American countries. This has created a sort of rivalry between some people who demand that ceviche was created in a specific country or that one variation is better than the others. Pure Chauvinism, in my opinion. We tend to forget that many culinary traditions were born long before Spanish conquest drew imaginary lines that made us believe “I’m from here, you’re from there.” Isn’t it time to start thinking in other ways? In the end …somos hermanos.

The ceviche has to be served cold, so try to keep everything in the fridge before you start making it. 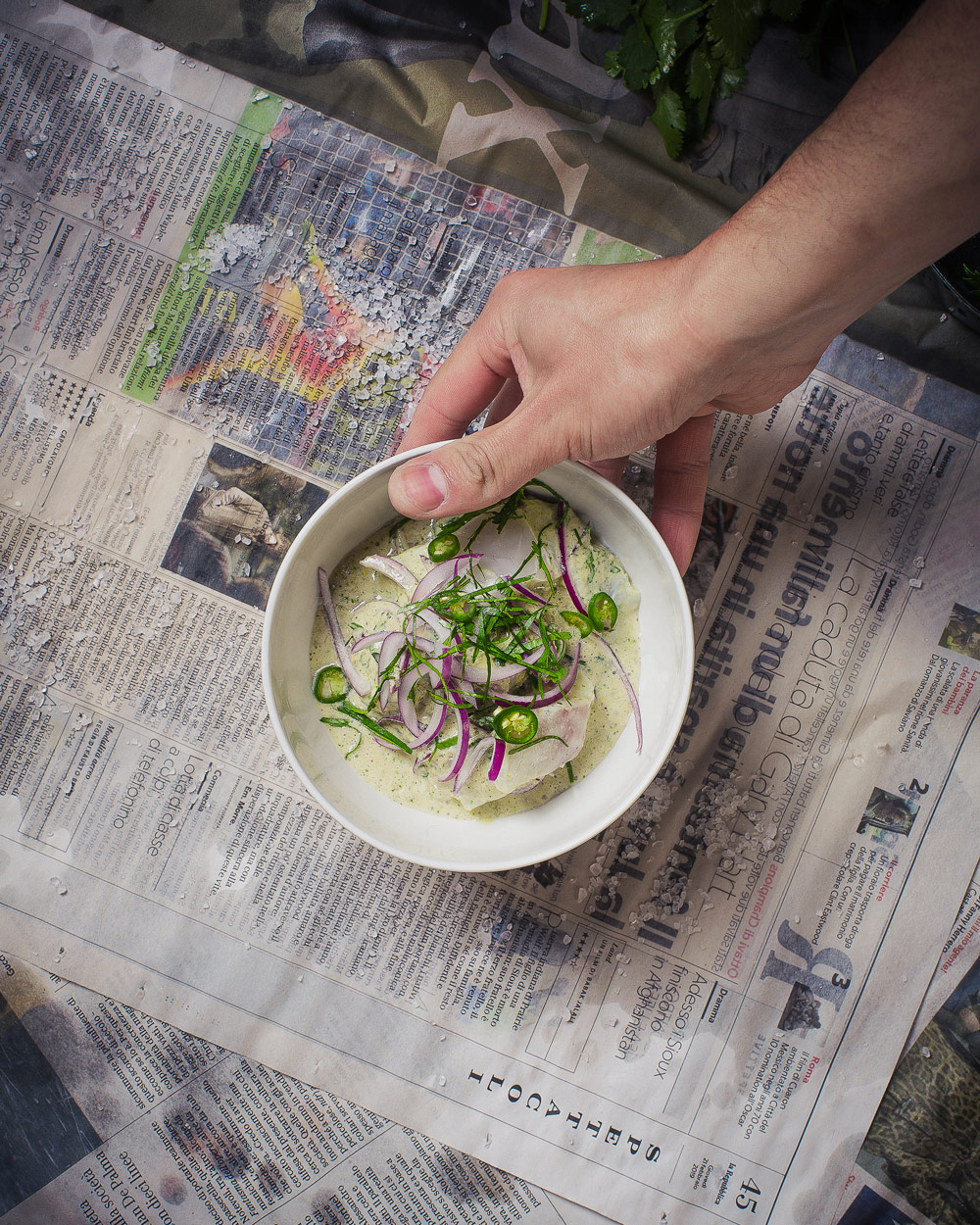 *This means the whole piece! Keep in mind that after filleting it, the weight of flesh is more or less half of the entire fish.

Chop the fish in cubes (not too small). Keep the back part/tail aside. Chop the onion and keep them in cold water. They are going to become a little softer and they are going to be crunchy. Chop 1 chilli pepper and the coriander thinner.

Squeeze the lemons and the limes. Chop 1 onion (without the center!), the celery, 1 chilli pepper, the ginger, the garlic and a half of the coriander stem. Put all the dry ingredients, including the back part/tail of the fish, salt and pepper in a vessel. Add the lemon/lime juice. Since limes/lemons can be tricky (super juicy or super dry), keep in mind that the juice has to cover all the dry ingredients. Add half of the evaporated milk. Blend everything. Then, strain it and keep the liquid.

Put all the dry ingredients (fish, coriander, onion, chilli pepper) together. Add salt and pepper. Mix it and add the Leche de tigre. When you mix everything, you can even put ice cubes to make the ceviche extra cold.

You can serve it with toast bread with oil, garlic and herbs. And a light beer matches it super well.

This is not a typical Peruvian ceviche because it incorporates a twist on tradition leche de tigre. I’m from Chile, and I have no problem admitting that my favorite ceviche is a Peruvian variation. Why would I? 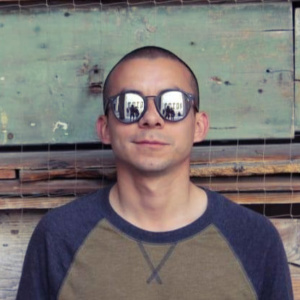 He finished culinary school without knowing anything, and then an entire universe opened to him. By chance, he always worked with fish and seafood which became a passion that was enhanced after living 4 years on an island in northern Chilean Patagonia. But just to know how to cook wasn’t enough, and his interest in other topics brought him to the University of Gastronomic Sciences.