Beyond Cotoletta and Panettone 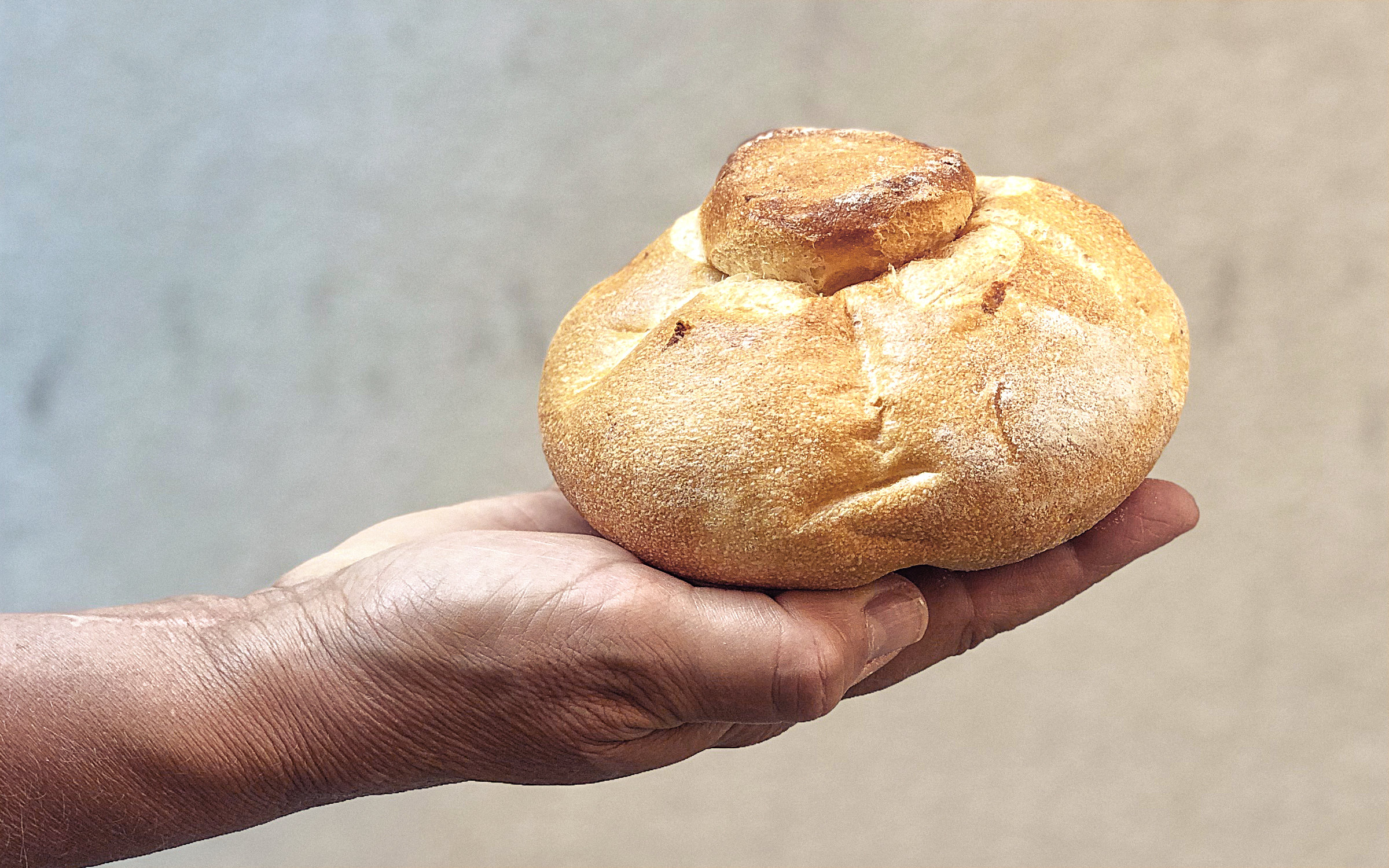 My pride for my Milanese roots is something that has always stirred confusion in people throughout Italy, who see Milan as a city filled with dirt, traffic and indifferent people. So, I won’t even begin to explain the expression on their faces when I try to discuss the rich, traditional Milanese cuisine: they just don’t think it exists — beyond the much-appreciated Panettone, cotoletta and risotto, obviously.

As a native representative of the city, I feel that it is my obligation to discover, document, share and, ultimately, celebrate the city’s traditional dishes, which were forgotten over time and to disclose the whereabouts of the restaurants, panetterie and gastronomie that are the keepsakes of our culinary tradition.

As Milan grew into a melting pot of national and international communities, the local cuisine was forgotten or never even discovered by most people. Instead, exotic, new and innovative cuisines took over the city’s restaurant scene. But, my city’s traditional cuisine still exists in a few places and in the memory of only a handful of people: documenting the histories, recipes and stories of these dishes is vital before they disappear completely and a glossy risotto alla milanese is the sole representative dish of Milan’s gastronomic heritage.

The golden and creamy risotto alla milanese is one of Milan’s symbols, yet this delicacy already loses its creaminess and bite the next day. The solution came with risotto al salto, which remains unknown to most people. What began as a home-cooked dish – no honourable Milanese restaurateur would ever dare to serve repurposed leftovers – quickly became part of the local and regional gastronomic scene. Its success is attributable to the crunchy texture of the exterior crust which forms when sautèeing the rice in butter. 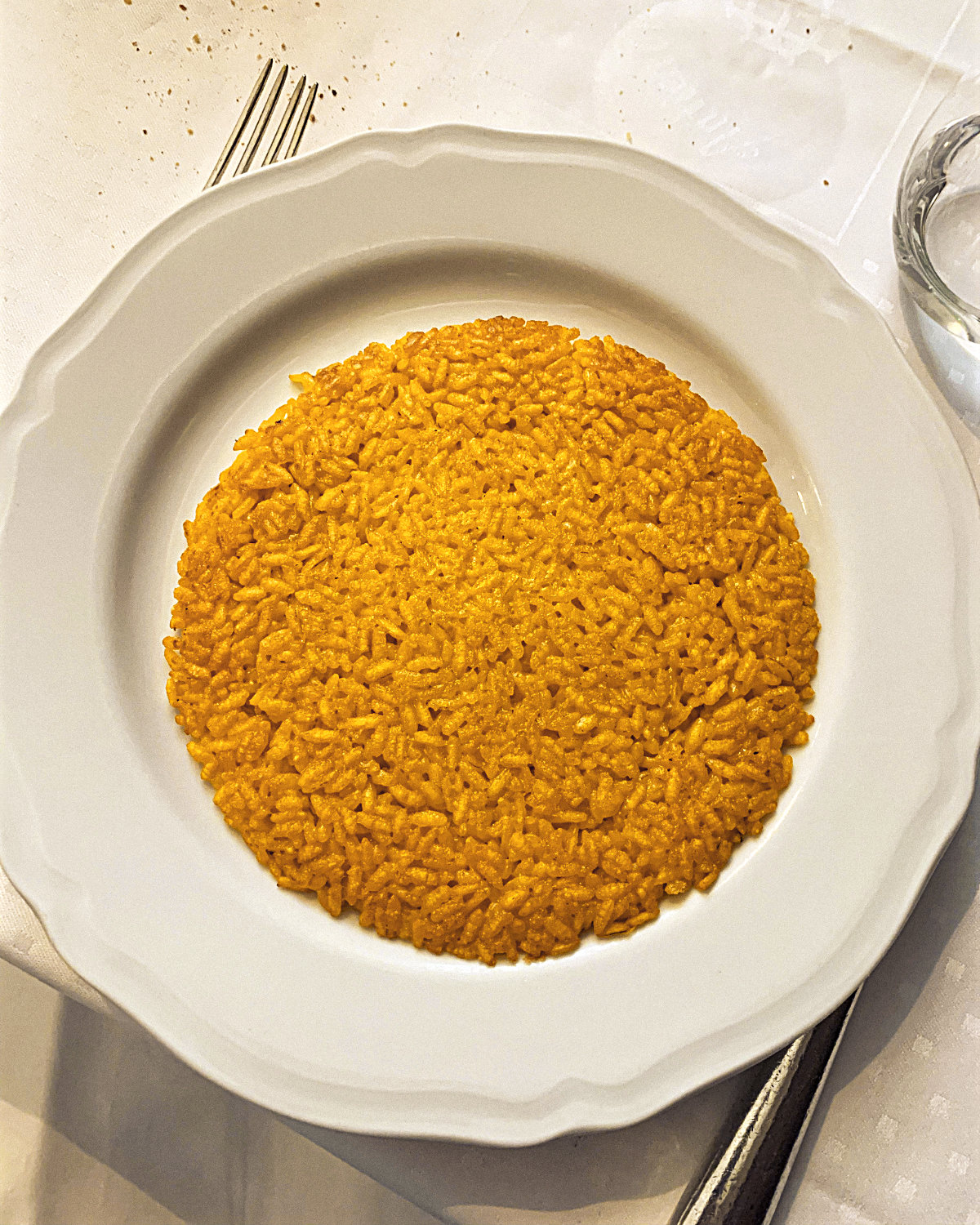 Saffron usage in Milan dates back over a millennium and its combination with rice can be linked to the 14th Century when the Duomo was built. The golden spice was being used as a pigment to colour the cathedral’s renowned towering stained glass windows and to flavour all sorts of sweet and savoury foods. It was at a prominent aristocratic wedding that saffron was first added to risotto, thus becoming one of the city’s most celebrated dishes. Antica Trattoria della Pesa, near Porta Garibaldi, was a station where goods would be weighed and taxed before they could enter the city. In 1880, it was transformed into a trattoria serving traditional Milanese food. Today, it remains one of the few restaurants where one can still enjoy a crunchy plate of risotto al salto worthy of its survival throughout the ages.

To replicate the dish yourself, remove the leftover risotto from the fridge a few hours before cooking, then melt a stick of butter in a pan and press down the risotto – the more compact the better – and cook it until golden on both sides, helping yourself with a lid to flip it over, so not to break the perfect circle.

It is the year 1700, the Austro-Hungarian empire has just taken control of Milan. With them came a selection of gastronomic innovations including the Kaisersemmel, a rose-shaped bread, which unfortunately turned soggy very quickly in Milan’s damp climate.

Locals weren’t big fans of the Austro-Hungarian folk and their damp, strangely-named bread, and so decided to adapt it to the local climatic conditions by removing a great quantity of the mollica. A lighter, crunchier and longer-lasting loaf of bread resulted and was named michetta, a diminutive of the dialect word for crumb: micca. 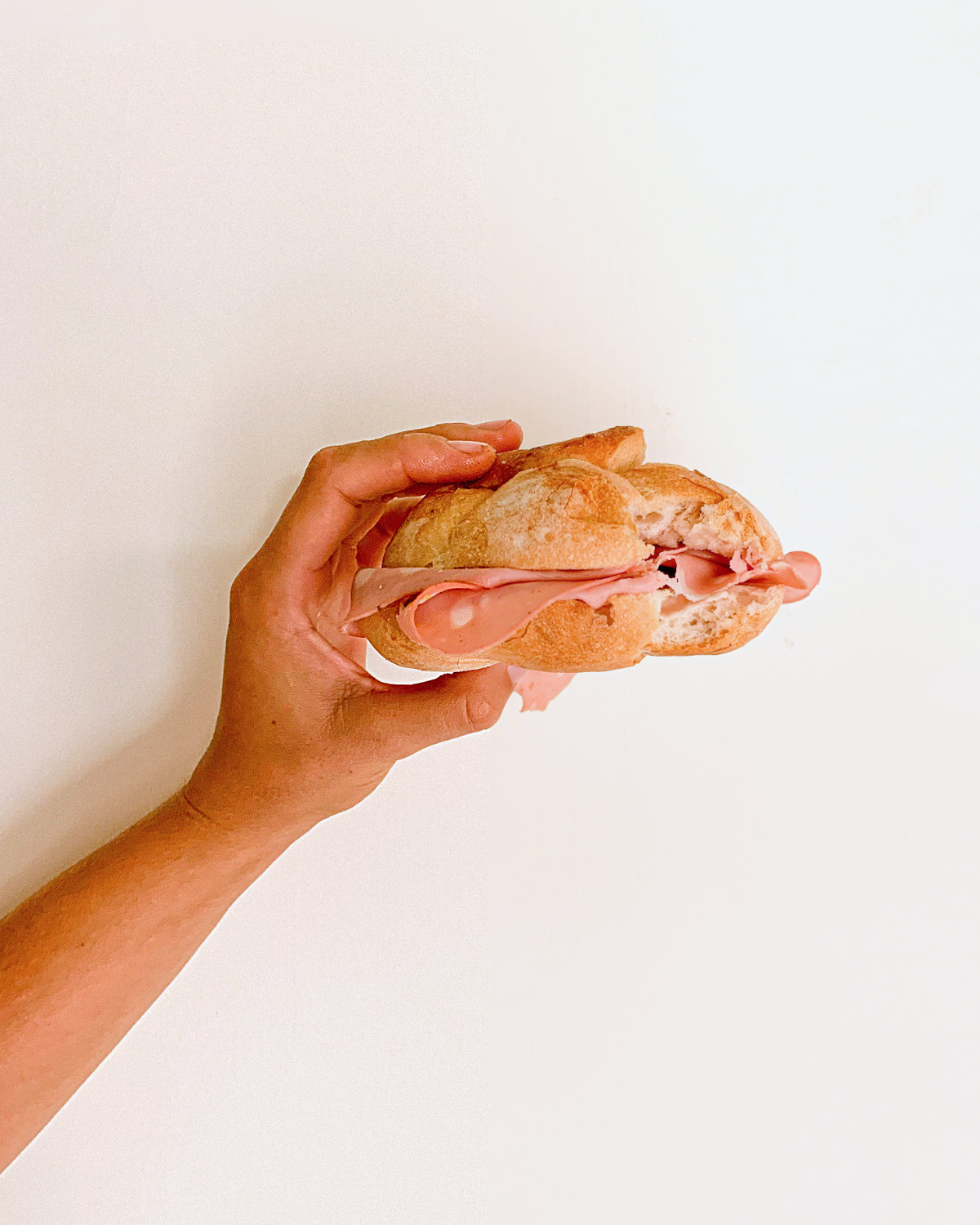 Michette used to be the most expensive bread sold at the bakery, being made from refined and pure whole grain flour, whereas all other bread was the result of mixing many different flours. Anything from mixed grains to chickpeas and even potatoes were used to assemble most kinds of bread, making them much more affordable. Nowadays it is the cheapest bread on the market, as people slowly started preferring more researched, unique and ancient grains.

Its usage has however stood the test of time and inflation, as it has been considered the worker’s bread since 1700 when it first became popular. It is still traditionally filled with thick slices of mortadella or, for those who have a sweet tooth, with burro e marmellata.

Pan dei Tramvai | The bread of the tram users

Once upon a time, when people would go around with horse-drawn carriages, a tramway that began in Monza and ended in Milan was installed. At first, it consisted of two pairs of tracks on which a small tram ran, pulled by horses. Later, at the beginning of the 1900s, those horses were substituted with electric cables. The tramway’s main purpose was to transport workers from Brianza, the countryside surrounding Milan, into the city for construction work.

The tram, el gamba de legn in dialect, could only travel at 15km per hour, so the journey lasted up to two hours, with no heating in winter and no air conditioning system in summer. To overcome the long and cold journey in the winter months, vendors selling a special bread, the pan dei tramvai, would stand at each end of the tramway with large containers held up by straps around their shoulders and sell the bread to the workers. This bread’s uniqueness lay in its high percentage of raisins, as well as sugar, eggs, honey, malt and vanilla, making it almost categorizable as a dessert, and therefore a great source of energy. 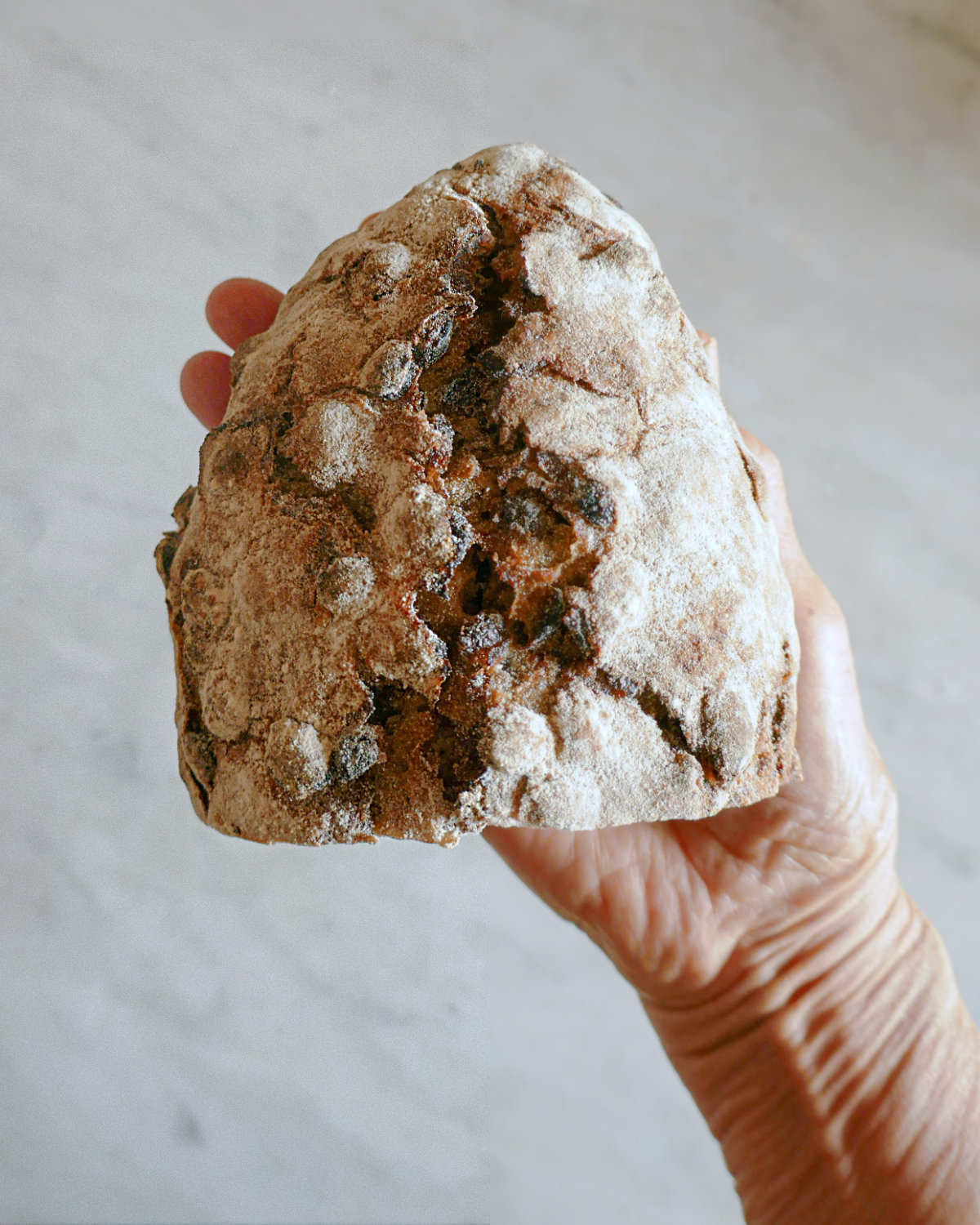 The tramway has been long gone, substituted with a highway and speedy train connections, and so have the men who sold the bread from their big baskets. Pan dei tramvai is being kept alive by a handful of bakers in Monza and Milan, and by the people who still remember the tramway days or their descendants. Terroir, a food boutique with a great selection of everything from delicious pomegranates to biodynamic cider is one of the places where one can buy a loaf of pan de tramvai, which is produced in a bakery just outside Milan. If you want to try it from a baker first hand and do a good deed at the same time, buy it from Buoni Dentro, a small bakery in the south of Milan which involves inmates in the production process—who happen to make excellent bread!

Through the ages, Milan was continuously contended and ruled by different monarchies, due to its strategic position. The 16th Century brought a Spanish reign onto Milan, and with them – once again – their gastronomic culture. Spaniards were obsessed with albondigas, fried meatballs they had, in turn, copied from the fried balls of meat the Arabs (who inhabited most of Spain) often prepared. The Milanese population grew to enjoy these bite-sized foods and decided to take them in and adapt them to local ingredients and palates.

Mondeghili were first made in people’s homes, by using all the pieces of meat that didn’t make the cut for refined dishes, further demonstrating that most Milanese dishes which survived the test of time were adopted as a creative way of repurposing leftovers. The oval meatballs are rolled and fried – rigorously – in butter. Longobards were a northern population, which used to be surrounded by an abundance of cows without an olive tree in sight, so butter, not oil, was at the basis of the Milanese cuisine.

Maria Teresa – Mari for friends – has been making mondeghili since she was a young girl, mirroring the hand movements and steps her mother passed onto her lovingly. She invited me to her cosy, welcoming kitchen one cold September day and taught me how to make this staple dish of our city’s cuisine. No recipe to glance at, no ingredient weighed, she performed everything from memory, and the result was the best fried ball of meat I have ever truly tasted.

“Why are they oval-shaped?” I asked, finally having built up the courage to reveal my slight ignorance towards the celebrated dish.

“I have no idea… my mother always used to make them like this!” 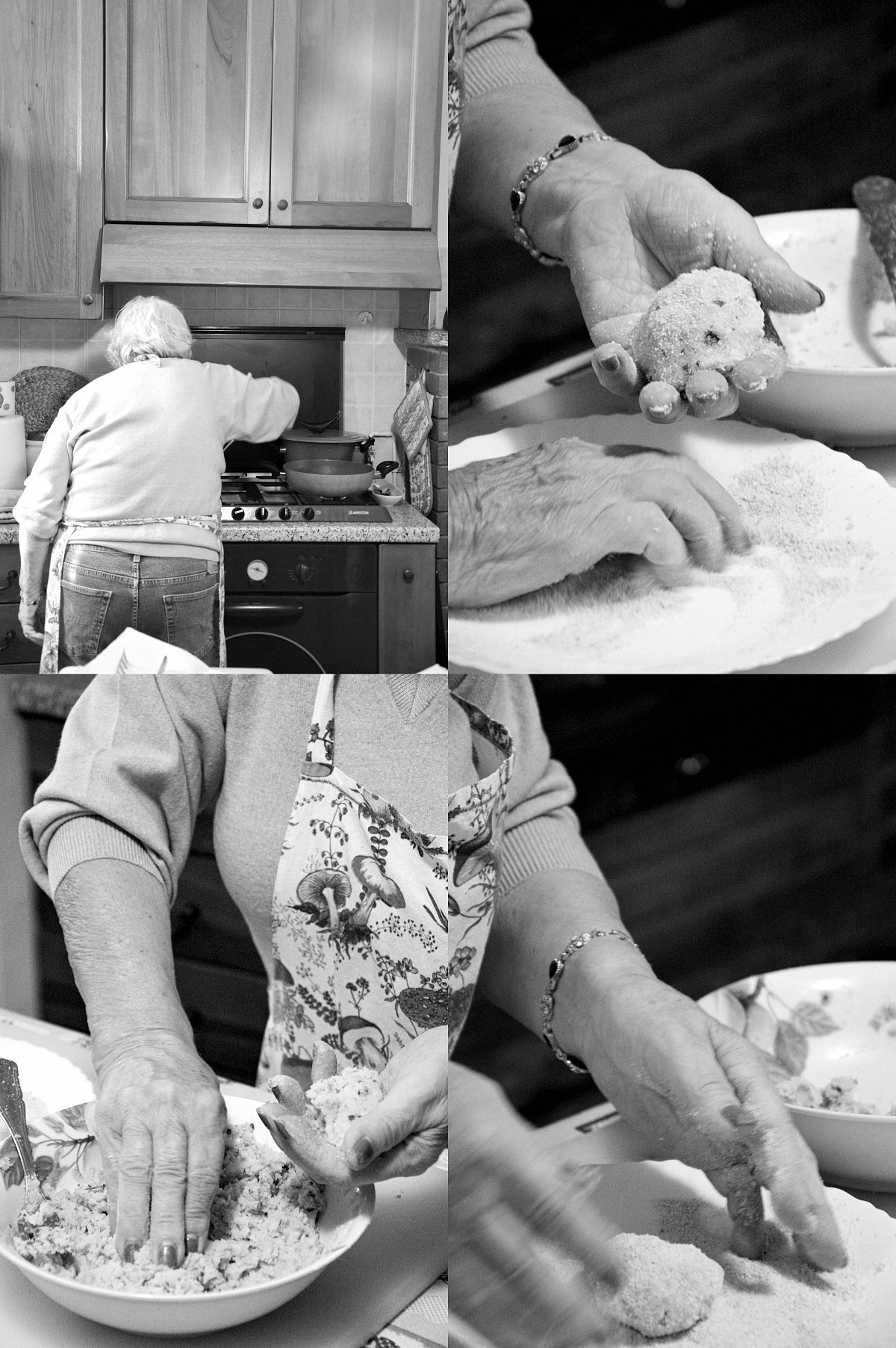 1 – Roughly chop up the leftover meat, mortadella and prosciutto cotto, place them all in a bowl.

2 – Add a few handfuls of grated Parmigiano and nutmeg to taste and combine the two eggs completely.

3 – Mash two potatoes into the bowl and a handful of finely chopped fresh parsley. Mix everything with a fork for a couple of minutes until you have achieved a soft, homogeneous mix.

4 – Sprinkle the breadcrumbs onto a plate, take a handful of filling and press it between your palms tightly until it is very compact, then cover it well with breadcrumbs and place to the side.

5 – Melt a stick of butter on high heat and place the mondeghili in it, making sure they don’t touch each other. Fry them on each side for 4 minutes or until golden and crispy.

6 – Once they are cooked, remove them from the pan with a slotted spoon and slide them onto a plate covered with kitchen paper, to remove the excess butter. Serve hot or cool! 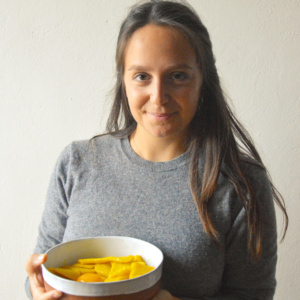 She is a visual communicator turned Gastronome, alumni of the 2019 Master in Food Culture, Communication and Marketing at the University of Gastronomic Sciences, with a passion for designing authentic cultural experiences connected to the field of gastronomy and oenology. Having grown up in Italy, she was lucky enough to always be surrounded by good food, which led her to found La Panza Piena, a blog which informs, inspires and entertains people with personal stories and insights into the world of food in an approachable and easy-going manner.