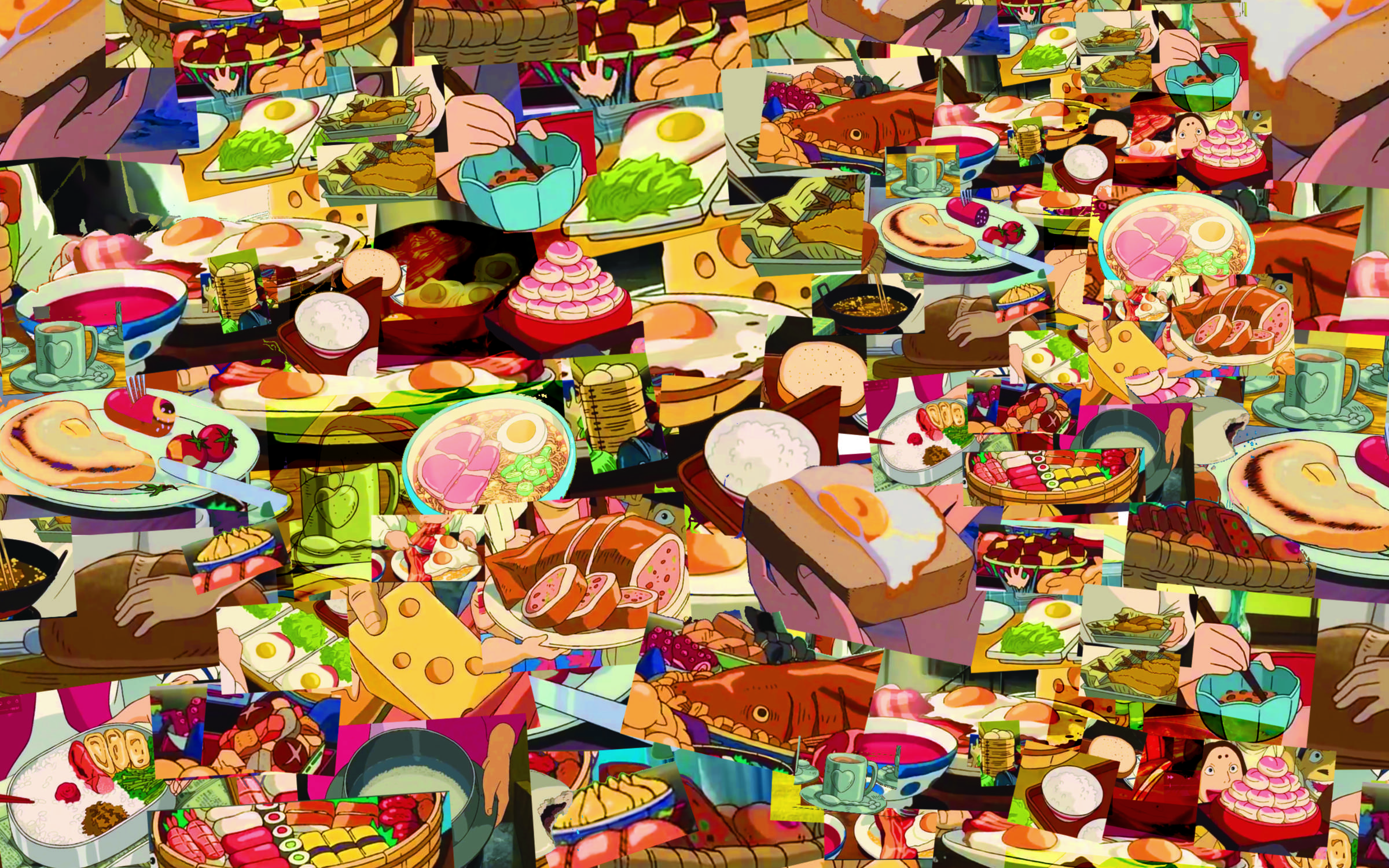 I remember the first Miyazaki film I ever saw quite clearly. I was about 6 and a half years old and sitting on the living room floor of my cousins’ house. It was evening and Cartoon Network was debuting the English-dubbed version of Academy Award-winning Spirited Away (2001) and it was quite a big deal. I sat with my extended family and watched the film ravenously. In the span of 125 minutes or so (with allowances for commercial advertising), I became overcome with a growing sense of wonder for Shinto spirits and Japanese folklore, but also with an exceptional curiosity for what constituted Japanese cuisine. Being Asian-American, I had been fortunate enough to encounter more globalised Japanese foods like sushi at such a young age, but the type of confusion that Spirited Away left me with was far beyond what I could initially understand at such a young age. Why on earth was I salivating over animations? And most importantly, why was I craving foods I had never eaten before?

Sometimes referred to as the ‘Walt Disney of Japan’, legendary filmmaker Hayao Miyazaki and his cinematic collective Studio Ghibli, continue to captivate audiences around the globe. From the bewitching forest tales of My Neighbor Totoro (1988) and Nausicaä of the Valley of the Wind (1984), to the endless blues of the sea and the sky in Ponyo (2008) and Kiki’s Delivery Service (1989), Miyazaki’s style invokes a sense of magical realism through highlighting the beauty, mysticism, and hidden adventure embedded in everyday life. Miyazaki’s films also garner additional praise for their ability to illustrate and explore more nuanced and complex topics such as war, feminism, environmentalism, and the like in ways that are palatable for viewers of all ages. The richness of the storytelling, the excruciatingly detailed animation, and whimsical musical scores are just a few of the many reasons to love and cherish the films of Hayao Miyazaki and Studio Ghibli.

Amongst the many reasons, one, in particular, resonates with me the most: Miyazaki’s obsession with food and its animation. It’s no secret that Hayao Miyazaki has a fondness for the multiple dimensions of food and eating; in fact, it seems hard to ignore at times. Hearty bento boxes, overstuffed onigiri (rice balls), steaming bowls of ramen, crackling roasted meats, succulent seafood spreads, and bouncy desserts are just some of the scenes that await you in his films.

What seems most comforting and nostalgic about the foods in Miyazaki and Studio Ghibli films is that they capture and embody all of the idealisms of food within the context of various stages of the food system. It seems as if every piece of produce is plump, flawless, and colourful – a direct result of all the love and care that the characters of the film exude almost effortlessly. Tomatoes are scarlet, aubergines are violet, and all those in-between have surprisingly received the ‘right’ amount of nutrients and sunshine. Each snack or minimalist meal looks exceptional, despite the ubiquity of their presence in everyday life. The simple onigiri in Spirited Away and the Obento in My Neighbor Totoro are transformed, while the humble camping stew in Princess Mononoke (1997), made with barely any ingredients, seems the most appetizing thing in the world.

“It’s no secret that Hayao Miyazaki has a fondness for the multiple dimensions of food and eating; in fact, it seems hard to ignore at times.”

Despite the argued inherent simplicity of Japanese cuisine, Miyazaki and Studio Ghibli films showcase a diverse range of eating and dining contexts. Along the Japanese culinary spectrum, there are many different subsects which divide and organise Japanese alimentary fare and experiences. Washoku, which refers to dishes considered as a part of a uniquely ‘Japanese indigenous food culture’ starkly contrasts to Nihon Ryori (restaurant-prepared foods), Yōshoku (Western-inspired Japanese foods), or the intricate multi-course Kaiseki (Japanese fine-dining)1. Miyazaki films unsurprisingly showcase many of the aforementioned; from the pre-made snack on-the-go to the elaborate spreads offered at socialite soirees, if it’s edible, it is imbued with a supernatural ability to make you crave it.

These cravings not only impact humans of all ages, but also the mythical beings and many animals that characterize many Miyazaki and Studio Ghibli films. In Kiki’s Delivery Service, Gigi the cat is seen enjoying fluffy pancakes with butter alongside his owner, Kiki. In Spirited Away, the soot sprites, which were literally conjured by a multi-armed metalworker to alleviate the workload, are seen scurrying over one another to gather their share of konpeito (sugar candy). Lastly, there is the goldfish Ponyo in Ponyo, who devours a large slice of ham which accidentally falls into the bucket she is being kept in for the time being. This approach, which unifies all beings with a devout love and passion for food demonstrates a key aspect of both Miyazaki and Studio Ghibli’s perspective on food and narratives, ‘[that while] the foods that appear [in the films] are not particularly special…their appearance in the films always has special meaning…scenes of casual meals are infused with tremendous storytelling importance’2. In essence, a Miyazaki and Studio Ghibli film would not be complete without its alimentary elements.

In retrospect, some of my favourite scenes in Miyazaki and Studio Ghibli films are those that involve food. I’ve often verbally referenced the ravenous nature of the character of No Face in Spirited Away as he is presented with a rotating feast by many of the minor characters working in Yubaba’s bathhouse and screeching, ‘I want to eat EVERYTHING!’. I’ve had numerous friends specifically reference their fascination with the breakfast preparation scene from Howl’s Moving Castle, where the lively personified flames produce golden sunny-side eggs and thick slices of bacon. One friend has even curiously remarked, ‘I don’t even eat bacon. I’ve never even tasted it. I’m Muslim. And yet, for some reason I feel envious every time I watch that scene’. Another friend cited the bakery from Kiki’s Delivery Service with its picturesque location by the sea, ‘[The bakery] always seemed very comforting…they take in this little girl and help her find her own way. Very wholesome…the same way that fresh baked bread is very hearty. Tastes like collective effervescence’. It gives me joy to know that this affinity for the animated foods of Miyazaki and Studio Ghibli films isn’t a perspective I’m alone in having. In fact, both Miyazaki and Studio Ghibli are well aware of the audiences’ love for their style of drawing foods.

Situated in the verdant grasses of Mitaka, in Western suburban Tokyo stands the famous Studio Ghibli Museum – a tribute to the studio’s artistic legacy. Inspired by the landscape designs of past films, the museum invites its visitors to, ‘get lost together’ through immersing themselves in Studio Ghibli’s manifold of composed realities. In the recent past, the museum hosted an exhibition by the name of Delicious! Animating Memorable Meals which addressed the studio’s love for food and its animation. As the exhibition’s description explains, ‘…these scenes of meals are appealing and charming. No dialogue is needed to convey deliciousness and happiness’3. Curated by Goro Miyazaki, son of Hayao Miyazaki and fellow filmmaker, this two-part exhibit gathers numerous film examples to explore Studio Ghibli’s method of drawing foods that, ‘appear even more delectable than the real thing’4. The exhibit stresses the importance of the relationship between food and memory, food and emotions, and the use of movement to curate realism in drawn realities.

“As the exhibition’s description explains, ‘…these scenes of meals are appealing and charming. No dialogue is needed to convey deliciousness and happiness’”

Hayao Miyazaki explains in Starting Point (2009), a volume of essays and interviews, that anime walks a fine line between fiction and reality; animators ‘must fabricate a life that seems so real…[that] the world depicted might possibly exist’, thus fine-tuning the process of drawing food and its consumption is necessary5. Although eating might seem mundane at times, there is much beauty to be found in all its encompassing processes: textures, viscosities, and colours are just some of them. Numerous moments across the Miyazaki and Studio Ghibli repertoire come to mind: shimmering thick soup dumplings in Spirited Away, sunshine-filled and glistening spoonfuls of honey from Ponyo, swirling wine in Porco Rosso (1992), crispy red onion slices and cheese on hearty slices of bread in Tales from Earthsea (2006), and sizzling horse mackerel tempura from Up on Poppy Hill (2011).

So you’re probably still wondering: How is it possible that these drawn food images are so stimulating to me? How can I crave something I’ve never had before? How can an image of something I don’t know, be inherently ‘perfect’? I think about these questions a lot when I’m watching Miyazaki films. Is there a method to the madness? Is there some magical formula to capturing the essence of all types of foods? In his book Understanding Comics: The Invisible Art (1993), cartoonist and graphic arts scholar Scott McCloud argues that drawn images generate a sense of universality through the stripping of images – meaning that only the most ‘important’ or ‘significant’ details are emphasised as a basis for the object or idea being depicted6. Whether it’s the signature curve of a banana, the fibrous interior of pineapples, or the way that grill marks detail a slice of meat or vegetable, it’s these rich details that bring the fantasy of Miyazaki and Ghibli films to the edge of reality. The foods in the films appear unreal, yet real, at the same time. The situations involving food are relatable, emotions are raw, and our hunger for the film’s plot progression and depicted cuisines, grows.

We feel angry alongside Kiki as her client’s pumpkin and herring pie is rejected by an angsty granddaughter. We empathise with Chihiro as she bites into an onigiri and is left with residual grains on her face. We were charmed by No Face’s change of heart as he eats a slice of cake with his cup of tea with Zeniba, and felt tranquility as Satsuki prepared Obento for her family with immense precision. As we watch Miyazaki films, we are immersed into the rhythms of lives we’ve never lived and acquire palettes for foods we’ve (sometimes) never encountered. As we consume the food imagery of the films, we are simultaneously consuming their perfected visual formulas. In a sense, as we enjoy Miyazaki and Studio Ghibli films, we are living (and eating!) the fantasy of everyday life.