The Story Behind the Superfood

Açaí bowls – the version with fruits, oats and sometimes even chia – are one of the strangest things I’ve ever encountered. It is foreign to me, a woman born and raised in the northern part of Brazil, where most of the palm trees, that mother this purple fruit, grow. My bowl is quite different than the ones considered highly Instagrammable: the thick, deep purple puree is topped with crunchy manioc flour and with pieces of fried charque, fish or salt-cured river prawns on the side. However, I don’t mean to dismiss anyone who drinks it otherwise: culture is not a rock-solid thing. It is plural and malleable.

My mother puts ice inside her bowl and my brother eats it with tapioca do Pará – look it up, it does not look like bubble tea. I sprinkle sugar on top of mine, which is usually frowned upon by other locals. My point is that the idea of açaí as a superfruit, and its entry into the global commodity market, dismisses the uses it has had throughout the centuries for local communities in the Amazon and the knowledge attached to the processing of the fruit. It also changes the taste and its local economic impact – for better or for worse.

The açaí plant usually grows in floodplains and is considered by locals to be the most important part of their diet: 15% to 30% of the calorie intake of the ribeirinhos (the traditional communities that live beside the rivers) in the Eastern Amazon comes from açaí. My household, being urban and middle class, had a different relationship with it. We would have açaí mostly on weekends when my father came home at lunchtime with two litres of the thick juice and a bag of manioc flour or tapioca. As we sat together, he, my grandmother and I made the açaí our main course, while my mother and brother kept their portions for after lunch – the closest option to the sweet bowls I can think of.

Outside the Lowlands of the Amazon

The version of açaí known in the Global North is actually a product of the internal complexity of Brazil. The country is big and it has been historically divided by different forms of colonization. The arrival of the Portuguese in the region of Belém, in 1616, was strategic to keep away Dutch, French and English ships. As time went by, the Portuguese colonizers took over the river basin, forming the province of Grão-Pará. After Brazil’s Declaration of Independence in 1808, this province took 15 years and threats made by the Empire of Brazil to be transformed into a part of the nation. This separation existed in theory, but also in a more material sense: there were no direct roads that connected the North to the Center of Brazil until the 1960s.

In the 1990’s – through the Gracie family, famous Jiu-Jitsu athletes from the state of Pará – açaí with guaraná started being used as an energy supplement in the Southeast, particularly in Rio. The mix made the concentration of the pure açaí dissolve into a lighter liquid, easier to consume by those who were not used to its natural flavour. Then the combinations came: other fruits, grains and even honey were placed on top of it. In a sense, the way most gringos (foreigners, usually from the United States or Europe) know the fruit is based on how Brazilians consume it, but not exactly how it is consumed in the Eastern Amazon. After Rio, other states followed and the açaí industry made the fruit a synonym for its frozen form. The ice-cream-like version of açaí bowls, then, travelled to North America and Europe in a movement trickier to map.

More Northern than the North

The açaí boom in the international market has one interesting landmark: when Oprah and Dr Perricone vouched for it and assigned it a superfood in 2005. Since then, companies who were already exporting the frozen pulp on a smaller scale managed to solidify their market. The thing about freezing the fruit, however, is that açaí’s anthocyanins degrade already when exposed to 0°C. Anyone who does not have a nutritionist as a mother, like me, may ask: what are anthocyanins? They’re pigments that, depending on the type and concentration, are speculated to prevent numerous health problems, such as heart disease – although research on the matter is not fully complete. Anthocyanins are also present in several of the so-called “superfoods” like goji or cranberries. It also allows açaí to be marketed that way, even though most of the processed and frozen açaí sold abroad, has already lost a significant amount of its anthocyanin content. Within 14 days, the concentration of the pigment is reduced by half.

Another phenomenon that makes the exported product quite different from the locally consumed one is the type of mashing. Exports are usually processed by larger machines, pulp processors, that do not take into account the fact that the berry has a layer of tannins close to the seed that must not be broken. If it breaks, the flavour profile changes completely, giving it a strong bitter flavour, which is what people who are used to freshly mashed açaí complain about. This is one of the reasons why most frozen mixtures are being diluted or have sugars added to them. Farewell to your superfood.

We’ve Been Here Before

The açaí I know has a velvety mouthfeel to it, even when it is ralo (or thin, which means it looks more like a juice).  The crunchiness and the slight sourness of my favourite type of manioc flour, the Farinha de Bragança, matches really well. The salt in the cured shrimps or fried fish give the final touch to it, making açaí one of the top 3 dishes I miss the most, when not in Brazil.

Food culture of the Eastern Amazon was, until recent times, particularly unknown to southern Brazilians for the lack of geographical connections, but for other reasons as well. The idea of the rainforest as a place full of resources, ready to be extracted by the colonizers – rubber, gold, wood – is an idea embedded in the concept of colony. This imagery of forests with no presence of what the southerners would consider “civilized societies” – a loaded and frequent terminology used to dismiss traditional communities – is still alive. This denies both urban Amazonian and native people’s experience in the land and works towards making the populations in northern Brazil as invisible as possible.

Açaí being traded as a commodity brings with it not only the theoretical approach to this issue but also a very similar economic situation to when other products were the target of international attention. The fruit pulp is still consumed by a large amount of the population, so the producers don’t fully rely on the international taste to açaí for the production. But the rising interest in the crop has already created an increasing interest by large-scale producers that might just reverse this movement. When I look at the example of quinoa, where, after a few years of economic prosperity, the production in other countries and bigger farms overthrew the small farm-based agricultural system, I start to get worried about the paths açaí production is taking.

Investments on the solid ground variety and research for the breeding of smaller, easier to harvest trees are not inherently bad. However, they symbolize a movement towards an açaí monoculture. The ones who defend the smaller trees claim that they would make the job of collecting the fruits less dangerous, but make the harvest possible without the need of the traditional skills of climbing the 9-meter palm tree. Also, the solid ground variety does not need the same biodiversity that is necessary to sustain the varieties that grow on the riverside (açaí de várzea), so it gives producers the ability to plant in large scale.

Change happens, but when it does we must ask ourselves: who does that serve? Many processing companies and exporters have come into play and the demand for açaí makes other crops disappear in small farms, especially because the fruit brings more money to the table. Once production goes through the roof with monocultures and larger producers, these middle people will not depend on the local farmers and will wield even more power over the prices of the fruit. This would not only mean a downfall for biodiversity, but also for the small farmer’s economic and food sovereignty.

Once the diversity of crops goes down, sourcing food from industries and supermarkets becomes even more prevalent. This transition is happening right when Big Food makes itself the cheapest available option and I think it’s safe to say there is a pattern the market will perpetuate: the sickening marginalization of communities so that the Global North is able to eat our nutritious staples.

The açaí eaten in its pureed form in the Eastern Amazon is really hard to get anywhere else. If you do, you can make the traditional salt-cured prawns to have as a side dish. Here’s my favourite recipe:

Preheat the oven at 180°C. Boil approximately 2L of water in a large pot. Put the prawns in the water for a couple of seconds until they turn slightly orange. Remove them and set aside to dry. Place 1kg of salt on the bottom of a baking tray. Rub the annatto in the prawns and then place them on top of the tray. Distribute the rest of the salt on the top, being careful to cover every inch of the prawns. Put them in the oven for 3 to 4 hours. The shell must be wrinkled and the inside must be dry. This preparation lasts for around 2 to 3 weeks inside the fridge.

You can throw them in hot water before consumption to take a little bit of the saltiness off and to hydrate it. Eat it with the açaí and manioc flour. 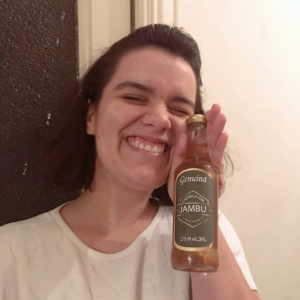 Alumna of the Master of Gastronomy at the University of Gastronomic Sciences. She is a journalist and videomaker born and raised in Belém, Brazil. She founded and worked as a food culture reporter and editor of the online magazine Na Cuia, as well as a content producer at a state-owned broadcaster in her hometown.